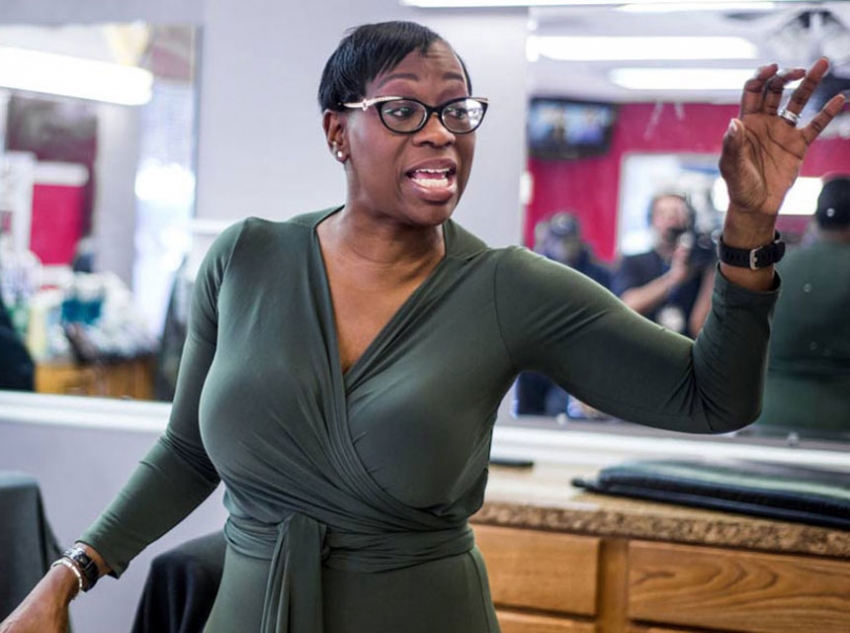 State Sen. Nina Turner on Why Black Voters Should Support Bernie—But Not Stop There

We need a leader who understands that everybody’s journey is not the same and that our government is designed for us to do collectively what we cannot do as individuals.

If you are from the Buckeye state, or if you regularly tune into CNN and MSNBC to watch election coverage, you know Nina Turner. She is that Sanders surrogate with a gift for gab who never tires of talking up Bernie’s candidacy. Turner served in the Ohio state Senate from 2008 until 2015. She made a run for Ohio secretary of state, and lost. Today she is a co-chair of the Ohio Taskforce on Community-Police Relations and is seen as a likely candidate for mayor of Cleveland in 2017.

As a rising star in the Democratic Party (Bill Clinton wrote a fundraising letter on her behalf when she ran for secretary of state), Turner made national news in November, when, feeling the Bern, she very publicly switched her allegiance from Hillary Clinton (she was involved in the Ready for Hillary PAC) to Bernie Sanders. Born in 1967, the oldest of seven children, at age 14 Turner began working to support her family. Upon graduation from a Cleveland high school, she enrolled in Cuyahoga Community College, where she earned an associate’s degree. From there she went on to Cleveland State University and earned a B.A. and an M.A. in history. She is currently a history professor at Cuyahoga Community College.

Turner has said her role model is her grandmother, Inez Emerson: “She may have only had a third-grade education, but she was by far the wisest woman I have ever met.” Emerson told her of the three things one needed to succeed in life: a wishbone, a jawbone and a backbone.

Turner’s wishbone is intact: She supports Sanders because he is someone with whom she says she shares “heart-soul agreement.”

Turner’s jawbone is legend, her oratorical skills having made her something of a cult figure among Bernie supporters. In 2009, the Plain Dealer’s Henry J. Gomez wrote, “At her speechifying best, Turner will mix in humor, quotes from historical figures and urban slang to reach a diverse audience.”

As for backbone? Her support for Sanders comes as no surprise. Turner built her career challenging the orthodoxy of the African-American political class. In 2009, as a state senator, she supported a ballot initiative to restructure—and thus reform—Cuyahoga County’s corrupt government. For her temerity, the black political establishment threatened to ruin her and a local African-American newspaper attacked her as the “lone black who is carrying the water for white folks.” But the measure passed, and Turner triumphed—a rising star in Ohio politics.

I interviewed Turner on The Benjamin Dixon Show, my YouTube broadcast. What follows is an edited version of our conversation.

Why are so many black voters supporting Hillary Clinton?

African Americans are brand loyal. I would love to see our people critique the people that they are voting for. We usually support those who stand up for social justice in this country, but we’re not doing that in this case. It’s total blind loyalty, without asking for anything in return. I’m stunned.

If Hillary Clinton wins, it’s going to be by virtue of the black vote. We are making decisions detrimental to the black community and neglecting economics. What is your message to black voters?

We, as a people, cannot separate economics from race. That being said, we as a nation are never ever going to be able to deal with the challenges of race and of class until we admit our sin, which is: White lives are more valued in this country than black.

But Bernie Sanders in the ’60s was standing up for black lives as a young person, a similar age to most of the Black Lives Matter activists. In 1988, Bernie, the mayor of Burlington, stood up for Rev. Jesse Jackson when the majority of the Democratic Party did not. That’s heart-soul agreement right there.

I know African Americans are a bit conservative on these kinds of issues, but even in the ’70s this man wrote a letter talking about how anti-gay laws are wrong. I’m not saying the man is perfect—but his moral compass has been in the right place the entire time. I just wish more people would do some research.

It drives me insane to see people so economically privileged that they aren’t concerned about economics. Making the conversation only about race doesn’t yield anything productive for people who are working for $8 per hour. One of our daily experiences as African Americans is living paycheck to paycheck, but that reality is now completely obliterated by identity politics. Can you tell us some of the things you have faced personally as a black woman for Bernie Sanders? There’s a lot being said about “Bernie Bros.”

Oh my God. Trust and believe me that the Hillary Clinton supporters can be just as bad; they have been just as bad. I never go on other people’s Facebook pages or Twitter feeds talking smack to them. I am proud of my support for Sanders because he does have that heart-soul agreement. But it’s been venomous. It’s curious to me how we fall out with each other over my support for a presidential candidate. At the end of the day, we’re all black, we’re all part of the 99%.

I don’t just want to focus on the negative. Thousands of the Senator’s supporters have had my back when people have been saying outrageous things. And some of my friends are supporting the Secretary, but we’re not falling out about it. At the end of the day our friendship is bigger than who we are supporting for president.

How do we reach out to those who have been disengaged from politics? Those are the people we need, more than worrying about pulling support away from Secretary Clinton.

That is a beautiful question. Some people are disengaged because of their low socioeconomic status in this country and we have to remind them that the power is in their hands, no matter how upset they are with the system. The system only works when they are in it. We have to register more people to vote and let them know that you can’t nation-build every four years. You nation-build every single year

We have to acknowledge our people’s pain and hurt and disappointment with the political class, because we do have folks elected to political office who don’t care about the people they serve. The people are tired of it. But we have others who are really true public servants.

Where does the progressive movement go from here?

All the people who are engaged, even if Bernie is not the nominee, must continue to collectively push this system to answer to the majority of the people. I’ll sum it up with a quote by Congresswoman Barbara Jordan: “What the people want is very simple—they want an America as good as its promise.” One great president cannot do it alone. Change happens in this country from the grassroots and not the grass-tops.

What do you say to those people who have no confidence in this political system? What can Bernie Sanders say, what can you say, to them to get them up to go vote?

Speaking out against the 1996 welfare reform bill, the one that had a dog whistle in it—the notion of the welfare queen—Bernie took to the floor of the House and said that this is wrong. Likewise, when I hear him talk about free university education, as a first-generation college graduate, that means so much to me. I want all children—black, brown, Native American and white—to have that opportunity, and not to be saddled with debt—debt in one hand and a degree in the other.

Education helped me become a cycle-breaker. My mother died at 42 years old with her dreams deferred. She died on the system of welfare. My mom worked hard. She tried hard. But everybody doesn’t run a race at the same pace. We need a leader who understands that everybody’s journey is not the same and that our government is designed for us to do collectively what we cannot do as individuals.

Bernie Sanders’ moral compass does not change based on political expediency. We have to do this for the next generation of young folks in this country. They deserve better. That is what we are living for.