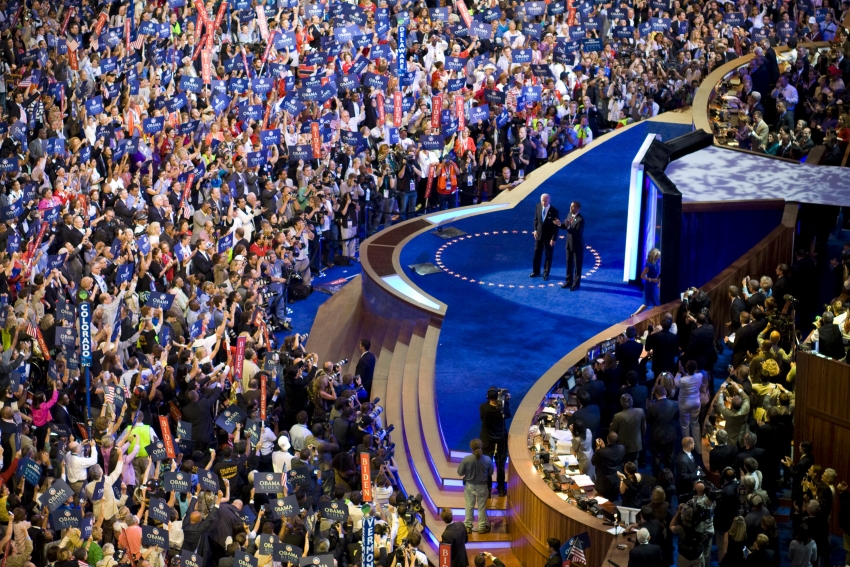 Are you a K Street suit wanting to get down and dirty in Philly? The DNC offers six party plans, one of which is sure to fit your budget. For “a minimum of $750,000” in bundled contributions, you can enjoy the Lobbyist Convention Package.

In July, win or lose, Bernie Sanders will be bringing his political revolution to Philadelphia. It promises to be quite the party. On the floor of the Democratic National Convention, the delegates will choose a nominee. They will debate the platform that defines what the Democratic Party stands for. And they will set the rules that govern how the party operates going forward—or at least, until the Democratic National Committee (DNC) deems it expedient to change those rules.

At the 2008 convention in Denver, under Barack Obama’s leadership, Democrats banned their party and its fundraising outfits from taking money from PACs and lobbyists. That prohibition was overturned in July, when the DNC announced that pay-to-play is a-okay. The message to lobbyists and their PACs: Come on in.

That’s no surprise. Today’s DNC is under the sway of Hillary Clinton and under the thumb of Chairwoman Debbie Wasserman-Schultz, two politicians who, when it comes to PACs and lobbyists, have never been able to say no.

Are you a K Street suit wanting to get down and dirty in Philly? The DNC offers six party plans, one of which is sure to fit your budget. For “a minimum of $750,000” in bundled contributions, you can enjoy the Lobbyist Convention Package. This features 10 fabulous perks, including “four tickets to an exclusive VIP party,” a bedroom “in a premier hotel within the National Finance Committee block [sic],” and “participation in business roundtables and industry panels throughout the Convention.” (This last benefit is a party favor included in all six plans.)

Without a ticket to “celebrations featuring celebrities and other luminaries” (another of the 10 perks), what are lowly Sanders and Clinton delegates to do? Participate in floor fights over the party rules and platform.

High on some Sanders supporters’ list of Democratic Party rule reforms is to find a way to keep super PACs out of the Democratic primaries. Were such a rule in place, Priorities USA Action, the Clinton super PAC that has harvested more than $55 million—including more than $20 million from people associated with finance, insurance and real estate industries— would have refrained from using that money to attack Bernie Sanders.

As for the Democratic Party platform, you can bet that Sanders delegates—along with the support of some Clinton supporters—will try to make breaking up too-big-to-fail banks an official Democratic policy.

If the Sanders folks got creative, they could propose a plank requiring all network and cable television outlets that hold a broadcast license to provide free air time to all candidates of any party that meets a threshold of public support.

Similarly, the delegates could demand that all Democratic candidates who run under the party banner support an amendment to the U.S. Constitution that would deny corporations the rights of flesh-and-blood people.

That’s the nice thing about a political revolution: It encourages people to think outside the box.

So, in July, as corporate lobbyists feast on the creations of “Philadelphia’s most recognized chefs” and revel in their “nightly access” to “VIP lounges” at the Wells Fargo Convention Center (two more of the 10 perks), Sanders delegates and their Clinton allies may want to get together over a beer and figure out how to crash the party.