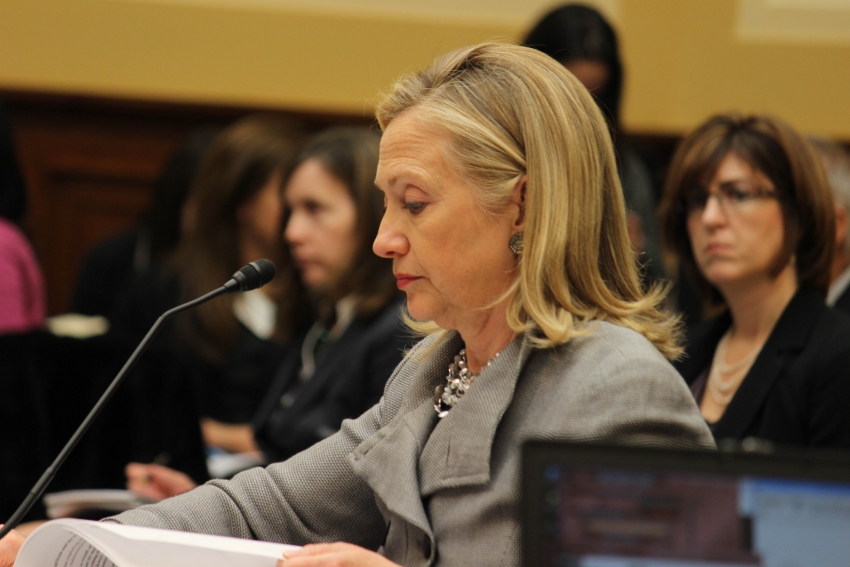 The Obama administration has cracked down on whistleblowers and leakers while offering Clinton a pass.

Look at the case of John Kiriakou, a former CIA officer who so far is the only person to go to jail over the government’s use of torture—not because he took part in it, but because in the course of blowing the whistle on the practice, he told a reporter the name of an undercover officer.

For the nearly eight years of President Obama’s presidency, national security officials and the president himself have insisted that unauthorized leaks of classified information are an unambiguous threat to national security and leakers must be hunted down, prosecuted and discouraged.

Through this reasoning, the Obama administration has instituted a government program to weed out potential leakers; thrown an accused whistleblower into 11 months of solitary confinement before she was found guilty of any crime; charged more than twice the number of people as all other administrations combined with violating the 99-year old Espionage Act; and even briefly threatened to criminalize journalism itself.

But now, with Hillary Clinton in hot water after 22 of the emails found on her private server were retroactively deemed “Top Secret,” the administration appears to be changing its tune. Faced with the prospect that a Democratic frontrunner and high-ranking political figure may have improperly handled classified material, some administration officials are suddenly applying much more nuance to the issue of unauthorized disclosures.

For the record, the government defines “Top Secret” as information whose disclosure could cause “exceptionally grave damage to the national security.”

It was a curious argument—one based not on the idea that Clinton hadn’t deliberately broken the law, as the whistleblowers Obama has gone after did, but a sort of knowing wink that the U.S. government’s claims about the danger of classified information were vastly overblown.

It was also a 180-degree reversal on what Obama had told a supporter of Chelsea Manning, the WikiLeaks whistleblower who leaked hundreds of thousands of U.S. diplomatic cables, back in 2011:

…people can have philosophical views [about Chelsea Manning] but I can’t conduct diplomacy on an open source [basis]… That’s not how the world works. … And I have to abide by certain rules of classified information. If I were to release material I weren’t allowed to, I’d be breaking the law. We’re a nation of laws! We don’t let individuals make their own decisions about how the laws operate. [She] broke the law.

When challenged that Manning had simply done what celebrated whistleblower Daniel Ellsberg had done in leaking the Pentagon Papers, Obama denied the comparison was accurate on the basis that “Ellsberg’s material wasn’t classified in the same way.”

Obama was right: The Pentagon Papers were “Top Secret,” the same classification as Clinton’s 22 emails, while none of Manning’s documents were classified as such—only “Secret” and “Confidential.” Yet Manning will be in jail until she’s 60, and it’s difficult to see Obama waving away her actions on the basis that what she leaked wasn’t really classified, as he appears to be doing with Clinton.

Obama’s comments come a few months after Clinton’s campaign manager complained about “overclassification run amok,” after seven of her email chains had been declared “Top Secret,” a claim her campaign repeated in March. Clinton was serving as secretary of state at the time that Manning had been arrested and thrown in solitary, and when her chief spokesman at the time called her treatment “ridiculous and counterproductive and stupid,” he was forced to resign over the comments.

Current Secretary of State John Kerry has also weighed in with a similar sentiment, telling the Huffington Post earlier this month that there’s a “massive amount of overclassification. People just stamping on quickly because it’s a way to, sort of, be correct.”

It’s not that Obama, Clinton and Kerry are wrong. The U.S. government does indeed suffer from a problem of overclassification, and there’s more than a small likelihood that at least a good part of Clinton’s “Top Secret” emails are a result of this problem. But where was this nuance and hedging from administration officials when it came to one of the many whistleblowers who were crushed under the heavy hand of the Justice Department over the last eight years?

Consider the case of Stephen Kim, a former State Department staff member who lost his life savings, saw his marriage fall apart, spiralled into suicidal depression and was ultimately thrown in jail for 10 months, all for merely discussing a classified report with a journalist that government officials privately acknowledged wasn’t in any way important.

Or look at the case of John Kiriakou, a former CIA officer who so far is the only person to go to jail over the government’s use of torture—not because he took part in it, but because in the course of blowing the whistle on the practice, he told a reporter the name of an undercover officer. Even though the officer’s name was never published, the Justice Department went after him with the full force of the law, sentencing him to jail for two and a half years. Meanwhile, recall that some of Clinton’s emails are alleged to contain identifying details of undercover officers.

Or look at the case of Jeffrey Sterling, whose life was similarly destroyed by an Espionage Act charge that came a whole six years after the crime he was supposed to have committed took place. These are just three cases of many, and for none of these cases has the Obama administration made the case that not all classified information is created equal.

This does fit with the Obama administration’s long-standing double standard when it comes to leaks, however—namely, that when government officials do it, it’s hunky dory. The Obama administration makes a regular habit of leaking information to the press when it’s convenient and flattering. More recently, documents obtained by Vice News revealed that CIA officials inadvertently revealed classified information in the course of advising members of the entertainment industry, including information that was “Secret”—the same classification as some of Chelsea Manning’s leaks.

Unfortunately, future administrations likely won’t be following Obama’s off-hand comments about what is and isn’t “really top secret” when they come to power. Instead, it will be his much less nuanced actions regarding leaks and whistleblowers that will be his legacy.