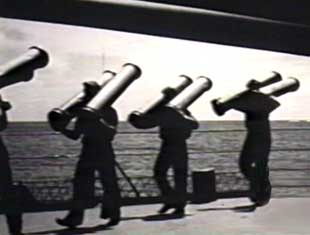 From Sundance: Eugene Jarecki's Why We Fight.

The festival may have burgeoned into a megamarketing spectacle, with companies from Turning Leaf wines to Volkswagen figuring out how to maximize their presence. But it’s still a place where independence of thought, difference of opinion and innovation in getting these qualities before audiences are prized. This year was an excellent one for politically and socially critical documentaries. Not only did engrossing and challenging work get shown to sold-out theaters, dealmakers of all kinds were competing to purchase them for theatrical distribution.

Expect to see, for instance, Alex Gibney’s Enron: The Smartest Guys in the Room in theaters within a couple of months. Enron chronicles the implosion of the world’s largest energy company from corruption so large-scale that it was simply unimaginable to Wall Street insiders. Gibney (who earlier made The Trials of Henry Kissinger with Eugene Jarecki) follows the story from the inside, seizing upon the company’s slogan, “Ask Why.” The question he asks: How did ordinary people who thought of themselves as decent and responsible go along with ever-larger fraud?

“Enron is important because it’s not the exception to the rule,” said Gibney at Sundance. “It’s an exaggeration—and maybe not enough of one—of the way things too often work.”

You’re also probably going to get to see Why We Fight, by Jarecki, in theaters in the spring. Yes, that title is drawn from Frank Capra’s celebrated WWII propaganda series, and so are some clips in the film. But the heart of this aggressively argued essay is in the first sequence, when President Dwight Eisenhower warns, in his farewell address, of the military-industrial complex. Jarecki argues that corporate greed drives compliant legislators and a self-interested military to foment war. The Iraq war, he argues, is the tragic result.

He also asks: How do good people become part of the problem, and what wakes them up? A female lieutenant colonel, part of the military’s public relations machinery, finally balks at passing along required boilerplate on WMD that she knows is erroneous. A grieving father who asks for his son’s name to be written on a piece of ordnance does an about-face when he realizes he has been lied to by the president. On the other hand, two fighter pilots who were the first to bomb Baghdad with “precision” bombs that killed civilians remain proud of their role in launching the war.

“The question before us now,” said Jarecki over lunch at Sundance, “is: ‘Is this the way we want to live?’ And each of us has to ask that question, because it’s now up to us to provide direction to our leaders.”

Both Jarecki and Gibney hope that after they’re in theaters, their films will show on television, with luck on a broadcast channel, one with more viewers than the teeny-audience Sundance Channel, where The Trials of Henry Kissinger played. But they’re prepared for the possibility that politically sensitive arguments are a tough sell—especially for American public television, where the culture wars never end.

That’s why it’s heartening to see that The Education of Shelby Knox, another standout among social documentaries at Sundance, is already pledged to the public TV series P.O.V., and thus eventually will be available to 98 percent of the American public. It’s a story for everybody.

Shelby is a good student from an upstanding Republican family in Lubbock, Texas, who became locally notorious when she led a campaign to get sexual education into the high school curriculum. In Texas, the law bans all sexual education except that which deals with abstinence. (Lubbock, it should be noted, has one of the highest teen pregnancy and STD rates in the country.) Veteran documentarians Marion Lipschutz and Rose Rosenblatt track Shelby’s school-of-hard-knocks political education, without cheerleading or moralizing. It’s a fascinating journey into cultural conservatism, where cognitive dissonance and denial are close friends.

Another public-TV treasure at Sundance was Shakespeare Behind Bars, in which Jilann Spitzmiller and Hank Rogerson follow a yearlong process of shaping a performance of The Tempest in a Kentucky prison, where the warden says he “hates prisons” and believes that they mostly fail in their rehab mission. The prisoners seize upon the play’s theme of redemption, until you believe Shakespeare must have written the play for prison inmates.

Next year will also bring some excellent documentaries to cable subscribers. Marc Levin’s Protocols of Zion explores anti-Semitism in the wake of 9/11, and was backed by HBO/Cinemax. Jessica Sanders’ After Innocence, funded by cable channel Showtime and destined for it after theatrical release, features several men whose sentences were dropped—in one case after 23 years in solitary confinement—after DNA or other evidence proved them innocent.

Several of the exonerees attended the festival. “At the screening last night, a prosecutor stood up and apologized on behalf of prosecutors,” said soft-spoken Wilton Dedge, who spent 22 years in prison on false charges. “That meant so much to me. I wish that others had that courage.”

And who said that social docs can’t be about sex and violence? Inside Deep Throat, an HBO-funded project by Fenton Bailey and Randy Barbato, recalls the astonishing history of the most popular pornographic film of all time. Whether or not you believe their argument that the 1972 film changed history, you have got to love the story of how the film was launched and received. Distributed entirely outside above-board businesses by the Mob, the film was hand-carried to theaters, with gunsels counting heads and taking cash back at the end of the day. Some of the interviewees in the film still tremble at the thought of retribution for even talking about it. Somehow $600 million went sloshing around the economy without ever being accounted for.

With companies like Docurama and Netflix picking up the pace on distributing and renting out docs on DVD, it seems to be getting easier to see controversial material, if you’re home and have equipment. Robert Greenwald also noted in a Sundance panel that with his “Un” series (Unprecedented, Uncovered, Unconstitutional) and Outfoxed, Internet-based “viral marketing” sold hundreds of thousands of copies of his films directly to viewers, many of whom expected to watch them with friends and family.

Broadcast and cablecast television continue, however, to be both influential and a bottleneck. The one unequivocal masterpiece at Sundance, Three Rooms of Melancholia—a profound meditation on the cost of war by Finnish artist Pirjo Honkasalo—faces an uphill battle to be seen at all, whether on broadcast or in theaters.

Still, filmmakers remained optimistic. At a reception for doc filmmakers, Redford—obviously gloomy about the inaugural events going on simultaneously—paid homage to the role of documentary films today. “You are the guardians of truth-telling,” he said. “And we need your stories more than ever.”