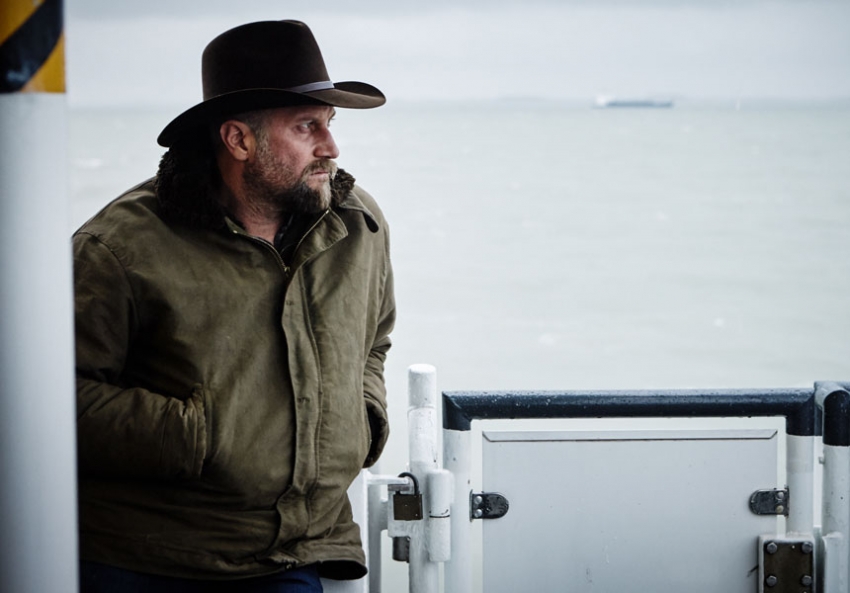 A French Take on John Wayne

When a French family tries to hold on to the past, it doesn’t end well.

Bidegain’s movie turns aimless and ruminative as these Frenchmen face the world outside of their borrowed-nostalgia homestead.

The terrain traversed by Thomas Bidegain’s Les Cowboys—the asymmetrical battles between Western culture and the post-colonial world, as they play out for ordinary people—is so familiar in European movies it could be cliché by now. That is, if it weren’t also the undeniable, postmodern State of Things, the new global normal.

The film treads upon some heavily loaded turf. It tells the tale of a patriarch trying to find his “kidnapped” teenage daughter, which, along with the potent title, immediately suggests John Ford’s classic western The Searchers (1956). Ford’s film famously had a grizzled John Wayne spend years obsessively searching for a niece who had been abducted by the Comanche.

In this modern-day retelling, a burly dad named Alain (François Damiens) loses his 16-year-old daughter Kelly (Iliana Zabeth) at a pseudo-American rodeo in semi-rural France. As days pass, he discovers that she has an Arab boyfriend and does not intend to be found.

Like Ford’s mysterious saga, the story rolls out across years and continents, roping in and glancing off other stories. But all of the ingredients dovetail into a masterfully conceived whole, beginning with Damiens’ Stetson-wearing dad, a tightly coiled study in Western privilege and control under siege. He’s in a horror film, while everyone he confronts acts as if nothing terrible or unusual has happened: Teens run away and get married sometimes, even to Arabs, right?

Meanwhile, the Muslim neighborhoods he barrels into repel him as an interloper, and the cops shrug. The only person who reflects his agitation is a Ministry of the Interior official who turns the father’s concerns around and asks about the missing girl’s science grades, clearly suspicious of her viability as a tool for bomb-making terrorists.

And this is well before 9/11, as we discover only when the burning towers are glimpsed on a TV midway through the film, an unspecified number of years into the hunt. We should’ve seen the signs, the film implies; American proto-colonialism is everywhere. Even in southeastern France, a fair’s all-white crowds sing “Tennessee Waltz” and line dance in cowboy boots, strangely aping a flag-draped American culture they have no connection to. The family’s home is done in late fake-Alamo; there’s even a family friend in a poncho nicknamed “the Indian.”

This imperialist iconography, borrowed from one culture by another, links Alain’s world to the fate of the Native Americans. A cowboy hat in this context bursts with creepy meaning: Cowboy-ism is on the rise, one colonialism is much like any other, and all are subject to eventual blowback.

In the John Wayne film, the forces in conflict are love versus xenophobia. Will Wayne’s raging bigot save his niece when he finds her, or snuff her out because she’s been defiled as an Indian’s wife? All by itself, that single furious question has made The Searchers one of American movies’ most resonant achievements. For Bidegain, the question has grown more complex—the modern white man is even more helpless in his desperation, unable to rely on prairie justice to maintain his tenuous control over his world.

As the film loosens its focus with time, the family’s young son matures into a wily teenager (Finnegan Oldfield) who continues his father’s search for Kelly out of guilt and obligation. He ends up on the Afghan border, where the story begins to morph and mutate, encapsulating a not-entirely trustworthy American smuggler (John C. Reilly), the politics of NGOs in a war zone  and a stranded Pakistani widow (Ellora Torchia). The bombings in Madrid and London also show up on TV. Like the search itself, Bidegain’s movie turns aimless and ruminative as these Frenchmen face the world outside of their borrowed-nostalgia homestead.

The film’s ending diverges radically from the famous climax of Ford’s movie, as it should in the day and age of nonstop change and forever war. Set in the wilds of a young country that served as its own frontier, the older film’s hopeful resolution was just that—if not strictly conservative in its implications, then at least affirmative of Hollywood family values. Les Cowboys’ final act can be read as merely a progressive happy ending, but it also delivers a necessary reminder—that holding onto the past, whoever you are, is a recipe for disaster