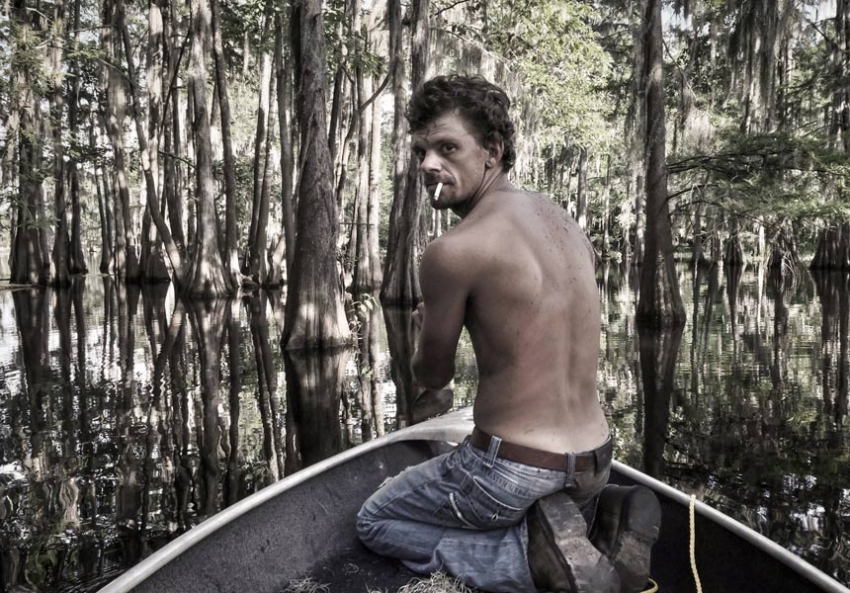 Mark, a meth addict from West Monroe, La., goes boating in a local cypress swamp. (Courtesy of The Other Side)

Requiem for an American Dream

Between fiction and reality in rural Louisiana.

Together, the two halves of Minervini’s film couldn’t be more prescient, as the rest of us wonder about the neglected, pervasive social rot that has pushed the Trump gazingstock up the mountain of presidential possibility.

Roberto Minervini’s The Other Side is a scrawny, off-putting mutt of a movie, one you’re likely to overlook, but shouldn’t—it has scads to say about two very different but very vital contemporary situations. On one hand, it’s a scalding portrait of the United States we try not to think about, the self-medicating America lost in the margins of red-state poverty. On the other, the film’s very existence is a testament to how we no longer can, or choose not to, distinguish between fiction and reality.

The two points are not unrelated. Captured in gritty, off-the-shoulder footage, the film’s subjects are Mark and Lisa, a real-life couple living in the forgotten weedlands around West Monroe, La. They look 50 but might be 30: Years of methamphetamine junkiedom and its attendant hygiene deficit have taken their toll. Minervini’s camera does not shy away, sitting as close to them as a fellow tweaker as they score, boil up and shoot dope into their arms, nipples, and so on. It is not a pleasant spectacle. The thing is, they’re sincerely in love—unwashed, clueless, cooing lovebirds in a collapsing trailer on the 21st-century edge of nowhere.

When they’re not actively injecting, Minervini follows after them like a fly-on-the-wall documentary purist, as Mark performs petty crimes, visits his very sick mom, hangs with elderly drunks spouting Trump-esque paranoia (Mark, no paragon of reason, is on their team), and promises to go clean on the day his mother finally dies, and not before. Intermingled in this is The Other Side’s other side—a community of earnest if hard-partying militia men, training in the woods, listening to knowing lectures about the liberal-Commie apocalypse (“It’s coming, that’s for sure”), target-shooting at Obama masks, and Bud Light-ing their way to a kind of last-ditch white man’s automatic-weapon autonomy in the wilderness. (We are to recall that West Monroe is, among whatever else, also the hometown of Duck Dynasty.)

Together, the two halves of Minervini’s film couldn’t be more prescient, as the rest of us wonder about the neglected, pervasive social rot that has pushed the Trump gazingstock up the mountain of presidential possibility. Here is the troubled id of the America we wanted to ignore, until we couldn’t.

At the same time, the movie is not a documentary—not quite. While the paramilitary crazies seem to have an unspoiled authenticity, Mark and Lisa are acting. That is, Minervini obviously shapes scenes around them and constructs situations, watching them in private moments as though they were in fact utterly alone, or pretending to be. (This includes very real sex.) A daytime skinny dip in a local pond is performed for the camera, as is Mark presenting Lisa with an engagement ring—although her tears are indelibly genuine. You can never tell what’s “real”—and must we try? The film’s most shocking sequence involves Mark shooting up a stripper with a vast pregnant belly, and then watching her (as we do) spread her legs on the stage for a paying customer. Critics have cried exploitation, but why do we assume it wasn’t saline? Many filmmakers, including Werner Herzog, Jafar Panahi and Miguel Gomes, have demonstrated how easy it is to smudge the fiction/nonfiction border, and how readily we accept filmstuff that’s completely fabricated as true. (Many duplicitous propagandists have done as much, of course.) Today, in a popular culture dominated by reality TV and self-promotion and social media hyperexposure, we have to accept that we may never again be able to tell the difference for sure. Visual media itself is, and in many ways has always been, a vehicle of uncertainty.

All the same, and however assembled from a secret recipe of truth and falsehood, The Other Side stands as a jarring and necessary window thrown open on the American scene circa 2016, in the shadow of a propulsive election season fueled by the unstable kerosene of long-brewing socioeconomic frustration and deindustrialization. We could all use a visit to West Monroe, as a counteragent to our sense of “reality” culled from media sources that also filter and warp to an unknowable degree, with the clear agenda of confirming our positions and supporting our media-buying habits—and that includes In These Times. Minervini’s movie is a reality show, but one busy challenging our presumptions, not validating our isolation.