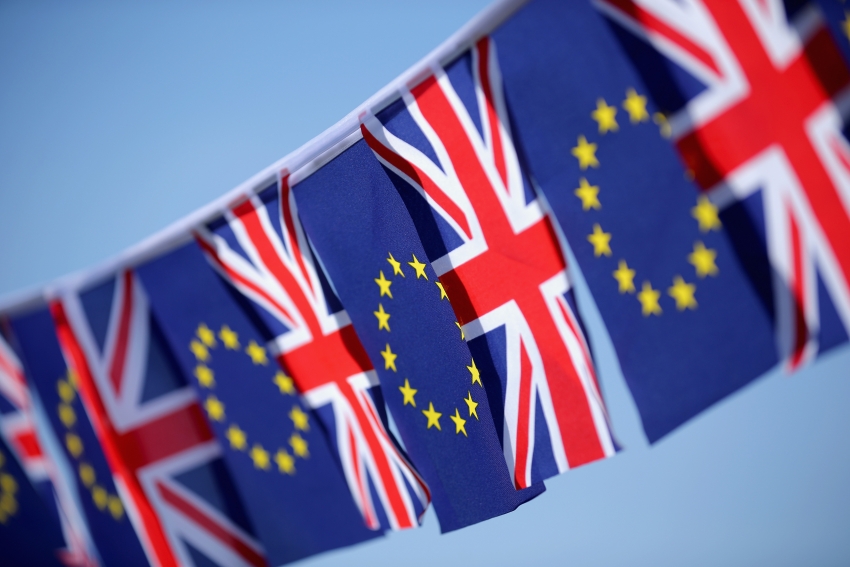 The European Union and British flags fly together. (Photo by illustration by Christopher Furlong/Getty Images)

The Brexit Vote and the Future of the European Union

We can only hope that common sense will prevail.

There’s no sense of history in the debate, no sense of our connections with and our obligations toward the other countries of Europe, no sense that if we are critical of some of what goes on in Brussels, that is in part our fault and our responsibility.

We’re frighteningly close to June 23 and the referendum to decide whether the UK stays in the European Union or leaves. It’s been a nasty fight, and it’s getting nastier. The result is extremely important for us and for Europe, yet a quarter of the population seems indifferent to the outcome, while the other three-quarters are split along lines of enmity and alliance that make little sense and rely on wild speculation on both sides, straight lies and a shared refusal to discuss what really matters.

A visitor from Mars would see it as primarily a struggle within the cabinet. Several of his own ministers want to replace the Conservative Prime Minister, David Cameron, and the Chancellor of the Exchequer, George Osborne. This is in itself a terrifying prospect, since their ringleaders and likely successors are Boris Johnson, London’s ex-mayor, who is famous for responding to what other people say with words like “piffle,” “bilge” and “hogwash,” and ruffling his yellow hair for photographers, and Michael Gove, who has made his name by laying waste to state education and speaking very fast. Together they constitute our version of Donald Trump.

Britain, they say, must “take back control” of its faltering economy, avoid being corralled into a Federal European state and cock a snook at what Gove calls “the invincible arrogance of Europe’s elite.” Their lies are staggering. They triple the amount of cash we’d reclaim if we left and then promise to spend it on a National Health Service they’ve publicly wanted to privatise. They frighten us with the prospect of 80 million Turks joining the EU and making their way here, probably before the year is out. And they plan to reduce immigration from the EU and elsewhere to infinitely fewer emigrants than we need or than we ought to accept as part of our responsibility for their plight, whether in Iraq or Afghanistan or Libya. They’re embarrassed to be confused with UKIP and UKIP’s grinning and sinister leader, Nigel Farage. Yet, as Sir John Major, once a Conservative Prime Minister, has expressed it, their analyses are misleading, their promises “deceitful” and their immigration policy “squalid.”

The Labour Party is ostensibly and uncomfortably on the same side as the Prime Minister, but hamstrung by its need to come up with an alternative set of reasons for remaining in the Union. It has properly concentrated on the EU’s record on human rights and workers’ rights, and shifted the blame for unemployment and a desperate housing shortage from immigrants to government cuts. But they have not, sadly, moved beyond our parochial interests.

That’s the trouble. There’s no sense of history in the debate, no sense of our connections with and our obligations toward the other countries of Europe, no sense that if we are critical of some of what goes on in Brussels, that is in part our fault and our responsibility. Rather than leaving the EU, we should be working to improve it, collaborating with other countries that are suffering far more than we are from post-2008 austerity and from the appalling mess that we helped to create in Iraq and in Libya, and the consequent refugee crisis. Anyone who remembers the Second World War and its aftermath must view the collaborative efforts of the EU as fundamentally positive and valuable and as deserving of far greater trust than a clutch of frivolous right-wing ministers could ever be.

And if we do focus on the likely deleterious effects of Brexit on the UK, there is the probability that Scotland would demand a referendum and vote to become a separate country. The Republic of Ireland is also an enthusiastic member of the EU. If Northern Ireland leaves the Union as part of the UK there will be a return to conflict between the two Irelands. Brexiters are in every sense “little Englanders.”

We should be reassured by the support from outsiders: Barack Obama, Christine Lagarde, even the mysterious Elena Ferrante, have begged us to vote to remain. So have hundreds of economists and historians from all over the world. The “Leave” campaign has chauvinism on its side, however, and Britain has always been a half-hearted and standoffish member of the European Union. When I was young Europe was spoken of as decidedly somewhere else. Ever since we finally joined the Union in 1973 British governments have insisted on having various kinds of special treatment: a huge financial rebate in 1985, the same year that the UK refused to participate in the Schengen agreement to abolish many of Europe’s internal borders, and then in 1999, we refused to join the Euro. The UK, like the United States, is currently prey to a politics of self harm. We can only hope that common sense will prevail.