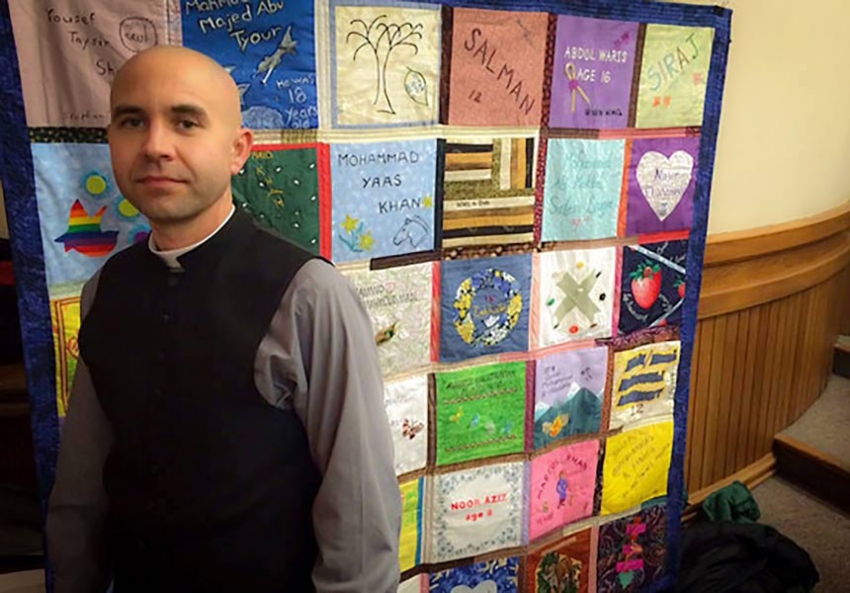 Meet Chris Antal, the U.S. Army Chaplain Who Resigned Over the Drone Program

‘We have morally disengaged, outsourcing our killing, forgetting that the bloodshed is on our hands too.’

'The executive branch continues to claim the right to kill anyone, anywhere on Earth, at any time, for secret reasons, based on secret evidence, in a secret process, undertaken by unidentified officials,' Antal wrote. 'I refuse to support this policy of unaccountable killing.'

There are thousands of chaplains who serve in the military, providing what the Department of Defense calls “pastoral care, counseling and coaching” to embattled soldiers. On April 12, one of these chaplains resigned in a public letter to President Obama, citing the administration’s on-going use of drones, its nuclear weapons policy and his refusal to serve as an “empire chaplain” for a government that continues to advance a policy of endless war.

“The executive branch continues to claim the right to kill anyone, anywhere on Earth, at any time, for secret reasons, based on secret evidence, in a secret process, undertaken by unidentifed officials,” he wrote. “I refuse to support this policy of unaccountable killing.” The chaplain in question is Chris Antal, pastor at New York’s Rock Tavern Unitarian Universalists, a spiritually diverse denomination with about 250,000 members, grounded in the values of justice, equity, compassion and human dignity.

This wasn’t Antal’s first public critique of his employer: He had previously posted online a sermon he’d given on Veterans Day 2012, called “Confession for America,” that railed against “the colossal misery our wars inflict on the innocent,” the “abandon[ment of ] our Afghan allies,” “indifference, callousness, and self-deception” and “the hero myth glorifying those who kill and die on our behalf.” He was asked by a commander to take down the post and investigated for speaking out. This ended with an official reprimand and release from active service, though he also received letters of support from people across the country who had read his sermon online.

Antal sat down with In These Times to share his thoughts about his decision to resign, the “moral injury” among today’s soldiers and more.

Why did you join the Army?

Before September 11, I had never considered serving in the military. After it, I was driven by compassion to care for the wounded and civic duty. I was also concerned as a religious liberal about the preponderance of evangelicals within the military chaplaincy. I thought that, together with the fact that our military was occupying Muslim nations, was a very volatile combination.

Were you a pacifist before this?

I considered myself a pacifist as a teenager. I refused to register for the selective service. My father had served as a medical officer in Vietnam, and I understood that war hurts. So I had skepticism toward the military.

I no longer consider myself to be a pacifist. I have a more sober, perhaps cynical view of human nature. I know the capacity of human beings to do harm, and I would say that the only moral justification for killing is to protect the innocent from certain harm.

Is there a moment you can pinpoint where you first began to question your role in the military?

I witnessed my first armed drones on the flight line at Kandahar Airfield. Then, doing investigative research to find out what we were doing with those drones led to a sobering realization.

Other factors also betrayed my sense of what is right: the abandonment of Afghan interpreters who had been promised visas under the Afghan Allies Protection Act, for instance, and the distress carried by soldiers who came to me on the brink of suicide for what they had done and seen. I returned a soldier-cynic, resolved that these wars were not about helping the people we claimed to be helping, and feeling morally distressed by the tragedy, waste and profits made by the few at the expense of many.

What have you found speaking with drone pilots?

Drone pilots have what is best called “moral injury.” This is a new buzzword within the Department of Veterans Affairs, describing perpetrating and bearing witness to acts that violate deeply held beliefs or values. It’s different than PTSD, post-traumatic stress disorder. Drone pilots are not in any physical danger, but they are witnessing death, sometimes innocent death, and they are perpetrating in many cases those deaths. That, as I have witnessed in veterans, creates a break in the soul.

Civil-military relations in our country are built on trust. Service members take an oath to protect and defend the Constitution, to be willing to kill or die for the nation. In return, the service member expects that the nation will use the military well, for a noble purpose. That contract has been broken again and again in our history. It happened with the Vietnam generation and again with this generation. There is a generation of young men and women who have felt betrayed by trusted citizens and political leaders.

You’ve critiqued the idolization of soldiers and veterans, which is a far cry from the rhetoric we usually see: “support the troops,” “the troops are heroes.”

It’s part of what T. Jeremy Gunn calls American national religion, this holy trinity between governmental theism, military supremacy and capitalism as freedom. It conflates God and country and assumes God’s blessing on everything that a nation does. In the 1960s and 1970s, every veteran was a “baby killer” and demonized by the society, and perhaps in some psychological sense there’s an overcompensation now with the projected valorization that every soldier is a hero. Both of these instances make it more difficult for the service member to come home.

The drone program has been part of the Obama administration’s repertoire for a while. What was it about this particular year and this particular time that you decided to resign?

I was originally ready to quit in 2013, after being released from active service following my sermon, but I had been convinced that my continued ministry was valuable and needed. I also heard a promise of greater transparency and accountability from President Obama, and believed the administration would follow through on working toward nuclear abolition.

So I was optimistic. But at the end of 2015, the Army revised the regulations that direct the chaplain’s role in the military, removing any reference to the chaplain’s responsibility to speak with a prophetic voice. It seemed to me that the Army was making chaplains into house preachers that sanctioned the military. At the same time, the Stimson Center released a report card of U.S. drone policy that gave a D for transparency and an F for accountability.

Finally, the administration this year announced plans to spend a trillion dollars upgrading and modernizing the nuclear arsenal. When they announced this—despite a lot of advocacy that I did with my congregation—for me, it meant game over. I thought that I couldn’t continue to support these policies and needed to speak out about them, and since I didn’t want to go to jail, I’d better get out of the military.

Is this a moral or ethical conflict that other chaplains are also dealing with?

I have encountered, among a minority of the chaplains, a deep moral conflict and pain. In many cases, these chaplains are entrenched in the system; they are very much dependent on the military to pay benefits to support their families. So they’re torn between speaking up and standing up, risking and jeopardizing all of that, or just biting their lip and being silent.

In the 1960s, Christian groups and gures had a prominent anti-war voice. This kind of anti-war sentiment or presence seems to be rare now among the wider Christian community. Why is that?

With the wars since September 11, we’ve had a national all-time low military participation rate of less than 1 percent. That is the percentage of the population that is actually serving in the military and fighting these wars. Add to that the escalation of these drone wars that allow us to kill without the shedding of American blood, and it becomes all too easy. America’s middle class and upper class don’t have skin in the game for the most part. Their children are not shedding blood. As I have said in my confession, we have morally disengaged, outsourcing our killing, forgetting that the bloodshed is on our hands too.