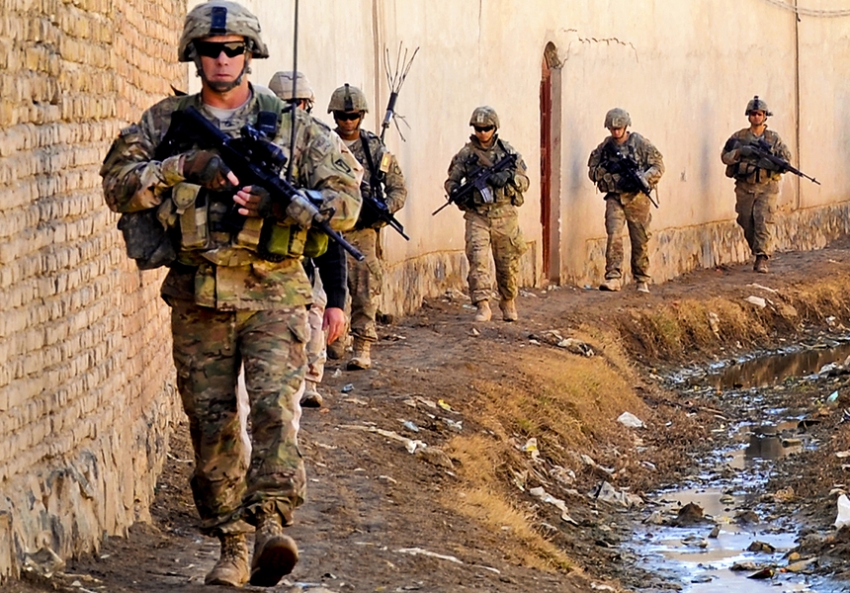 The War We Forgot To End: Why Are We Still in Afghanistan?

Last Wednesday, President Obama once again delayed the withdrawal of U.S. troops from Afghanistan. Approximately 8,400 troops will remain in the country through the end of his presidency, he announced, rather than the 5,500 he committed to back in October 2015. Meanwhile, casualties continue to mount: Thousands of Afghan civilians were killed in 2015 alone.

It’s time to end the longest war in U.S. history. Begun less than a month after the 9/11 attacks, the war aimed to destroy the al-Qaeda network led by Osama bin Laden and take out the Taliban government that had provided them with safe haven. President Bush’s focus, however, was anything but narrow: “Our war on terror begins with al-Qaeda, but it does not end there,” he said shortly before the invasion. “It will not end until every terrorist group of global reach has been found, stopped and defeated.”

Nearly 15 years and over $740 billion later, there are few genuine successes the United States can claim as validation for its efforts. While an American withdrawal won’t remedy the problems of Afghanistan entirely, there’s good evidence to suggest our continued presence is making things worse.

This unending, costly war came in response to blowback from American policies in the region. According to the conventional history, we began aiding the mujahideen, a loose-knit assortment of Afghan Islamist guerrilla militants, in 1980, in response to the December 1979 Soviet invasion. (While Osama bin Laden arrived in Afghanistan in 1979 and was affiliated with a predominantly non-native mujahideen group at that time, the CIA maintains it only funded and armed indigenous Afghan rebels.)

The conventional history is wrong, at least according to a 1998 interview with Zbigniew Brzezinski, former National Security Advisor to President Jimmy Carter. Brzezinski told a French weekly that we decided to aid the mujahideen six months before the Soviet Union invaded Afghanistan, in July 1979, knowing this could help push the Soviets into a Vietnam-style conflict. When pressed about whether he felt any regret having provided aid and arms to Islamic fundamentalists, Brzezinski, three years before the 9/11 attacks, responded brusquely: “What is more important in world history? … Some agitated Muslims or the liberation of Central Europe and the end of the Cold War?”

This strategy helped lead to the formation of the Taliban government, and ironically, now we are the ones ensnared in a perpetual, bloody and expensive Afghanistan conflict—all because of some “agitated Muslims.” There are 9,800 reported U.S. troops in Afghanistan (potentially more unreported, as there have been in Iraq), and with Wednesday’s announcement, we know that number is unlikely to go down much through the end of Obama’s presidency. While the President has formally declared that America is not engaged in a combat role, clashes between American forces and the Taliban continue.

Obama has also embraced drone warfare in Afghanistan, with the hope of more precise combat. According to the Bureau of Investigative Journalism, Afghanistan holds the ignominious distinction of being the “most drone-bombed country in the world.” But to what effect?

Michael Flynn, former Director of Intelligence in Afghanistan, had this to say: When a strike hits its target, “it makes us all feel good for 24 hours. And you know what? It doesn’t matter. It just makes them a martyr. They get replaced. It just created a new reason for them to fight us even harder.”

A study by a U.S. military adviser found that in one year, drone strikes in Afghanistan caused 10 times more civilian casualties than manned aircrafts. Leaked government documents show that between January 2012 and February 2013, over 200 people were killed by drone in a special operations campaign in northeastern Afghanistan—only 35 of whom were intended targets.

And despite all this, the Taliban control more of the country than they have since we invaded in 2001. It’s possible that U.S. withdrawal would allow the Taliban to take control in additional provinces, but there’s little evidence to suggest our constant military presence is effectively holding them off. And the violence is only getting worse: More Afghan civilians were killed or wounded in the conflict this past year than any other since the U.N. began record keeping in 2009.

Our reconstruction efforts have fared little better than our military efforts. We have spent over $113 billion aiding the recovery of this country we helped destroy—more than was spent on the Marshall Project following World War II, even adjusting for inflation—and $17 billion of that was described by ProPublica as “questionable spending” in a December 2015 report.

Some of this was frivolous on its face: For example, we spent $150 million renting luxury housing for U.S. Defense Department staff and their visitors. But even the more substantive programs that should have been successful were tangled in bureaucracy, corruption and incompetence. The Department of Defense invested $200 million on a literacy program, but no efforts were made to “verify students’ language proficiency, evaluate the effectiveness of instructions, monitor class size and length of instruction, or track graduates after they completed training,” according to a report from John F. Sopko, the U.S. Special Inspector General for Afghanistan Reconstruction.

Sopko also reported several problems with a nearly $70 million agricultural effort—some of which was spent on programs that Afghan officials say “had been found to be ineffective in precursor programs.” Another $488 million spent on mineral extraction programs was similarly ineffective: Some of it was marred by corruption, and much of it Afghans are unable to continue on their own because they lack the capacity to regulate the program and “research, award, and manage new contracts.”

While there have been some areas of improvement in quality of life for Afghan children since 2000, such as a decline in the child mortality rate (although it’s still among the highest in the world), the effects of the war have largely undercut these positive developments. Child trafficking, abduction and the use of child soldiers have skyrocketed, and child labor is rampant. It’s not fair to blame the U.S. entirely, but the impacts of American military intervention have been far-reaching—for example, the U.S.-funded Afghan Local Police militia has used child soldiers.

The 2001 invasion and subsequent occupation also undermined the Taliban’s 2000 ban on poppy cultivation. In the thirteen years after the U.S. ousted the Taliban and the U.S.-backed Afghan government stepped in, opium production doubled.

As of late 2014, 90 percent of the world’s opium supply came from Afghanistan. According to Matthieu Aikins, a journalist who has followed the country’s opium production closely, “Everyone is growing it. Everyone is profiting. It touches all levels of Afghan society, both sides of the conflict, the Taliban and the government. … But the government is even more involved.” Despite the U.S. having sunk over $8 billion in fighting the drug trade, Afghanistan is now the world leader in heroin production.

This is not to say that we should stop aiding reconstruction projects, though clearly we should address widespread mismanagement. Rather, we must recognize that an American military presence and constant war undermine humanitarian and reconstruction efforts. In Afghanistan as elsewhere, foreign military occupation and regime change—even if undergirded by the best of intentions—have led to unintended, often terrible, consequences.

After 15 years of death and destruction, not to mention billions of dollars down the drain, we have to admit the military option is not working. Our meddling in Afghanistan has not made that country better off or the world safer. It’s time for an orderly but immediate withdrawal.

Eli Massey is an independent journalist, editor, and researcher. His work has has appeared in the Chicago Tribune, Current Affairs, Jacobin, Mondoweiss, and elsewhere. He previously was an intern at the Institute for Policy Studies where he worked on Middle East politics and an editorial intern at In These Times. Follow him at @EliJMassey