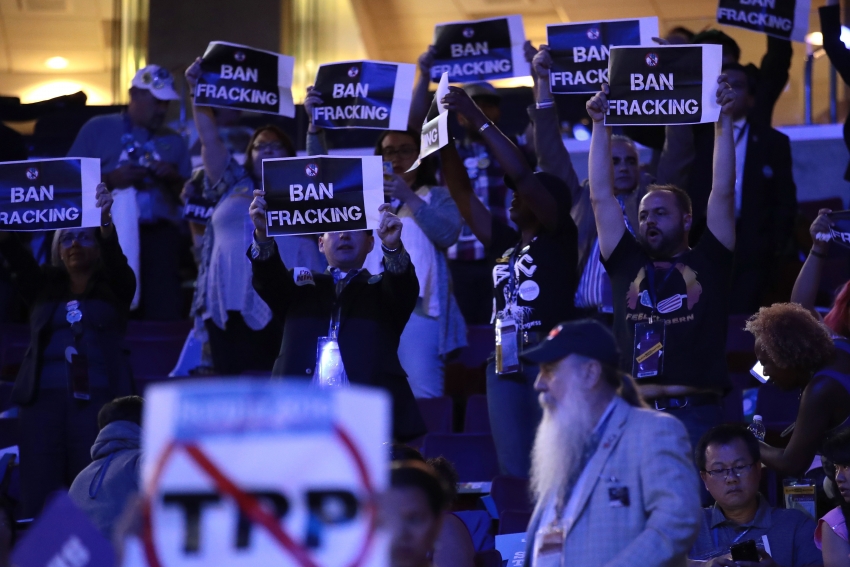 Throw a stick in Philadelphia this week and you’ll hit a conflict of interest. (Drew Angerer/ Getty Images)

At the DNC, Fossil Fuel Lobbyists Shack Up With the Fourth Estate

Corporations, politicians and the media get cozy in Philadelphia—and face pushback.

"If it would be in poor taste for Marlboro to underwrite panels on cigarettes’ health impacts, is the American Petroleum Institute any better suited to host them on climate change and the future of energy policy?"

PHILADELPHIA—At the Democratic National Convention in Philadelphia this week, it seems a sticker is all it takes to keep you out of a room—at least the rooms brought to you by the fossil fuel industry.

Collin Rees, a campaigner with the corporate accountability group Oil Change International, tried to attend a forum on energy and the environment Monday sponsored by The Atlantic and the American Petroleum Institute (API). He says he was denied entry and banned from future events after staff found stickers—bearing the words “Separate Oil and State”—in his backpack. Minutes later, security was escorting Rees off event property.

“We’re committed to conducting thoughtful and peaceful conversation,” Atlantic spokeswoman Anna Bross, who was on site Monday, told me later. “We were checking for things that might be disruptive to that.”

As the lobbying arm and trade association of the fossil fuel industry, API reliably outspends their fossil fuel company members in lobbying Congress for fossil fuel-friendly policies. At this year’s Democratic and Republican conventions, it teamed up with The Washington Post, The Atlantic and Politico to host a series of educational events.

If it would be in poor taste for Marlboro to underwrite panels on cigarettes’ health impacts, is the American Petroleum Institute any better suited to host them on climate change and the future of energy policy? Throw a stick in Philadelphia this week and you’ll hit a conflict of interest. In an election season where money in politics has risen to the top of the national debate, the oil and gas lobby is one of many grasping on to maintain its influence on both sides of the aisle.

According to its website, API represents “650 members involved in all aspects of petroleum,” including ExxonMobil, BP America Inc. and Chevron. Senate Democrats recently accused API of “perpetrating a sprawling web of misdirection and disinformation to block action on climate change.” Documents revealed by WikiLeaks found that the group, too, had paid private intelligence firm Stratfor some $13,000 a month in 2010 for reports on how to undermine and divide anti-extraction activists in groups like Greenpeace.

In response to why the magazine decided to work with API on this week’s talks, The Atlantic Washington editor Steve Clemons said that, “The sponsor of this event had nothing to do with the content,” and “had zero to do with who was invited or who was on stage,” which Bross confirmed later: “Atlantic has full editorial control in terms of what’s on the stage. The underwriter plays no role in that process.” She declined to say how much money changes hands in underwriting relationships.

During the conventions, news outlets and other companies rent out spaces surrounding party venues for policy talks on a range of subjects that bring together experts and officials from different fields. Other Atlantic event sponsors this week include the American Federation of Teachers and Maker’s Mark, a whisky producer. For The Washington Post, Politico, The Atlantic and others, these kinds of sponsorships and underwriting agreements help cover the cost.

The price to the outlet, Bross says, is branding and the ability to say a few words as the events begin. Though staffers maintain that their outlets reserve total editorial independence, these corporate backers quite literally set the stage, with logos featured prominently on the event backdrop and lobbyists, like Finkel, left to frame the discussion to the audience. (API’s logo—“Vote 4 Energy,” from its political education wing—popped up elsewhere on Philadelphia streets this week, plastered onto newsstands downtown.)

In contrast to parallel panels API hosted at the RNC, this week’s events are not stacked exclusively with climate deniers—though almost none of the conversation orbited around climate change itself. Events this week include a number of individuals with ties to the fossil fuel industry, but also a few earnest supporters of a transition to clean energy, like Rep. Jerry McNerney (D-Calif.) and Washington Gov. Jay Inslee.

The group Climate Hawks Vote has launched a petition calling on Democratic representatives to boycott API-sponsored events during the convention. Now boasting more than 12,000 signatures, the petition states, “We expect the members of the Democratic Party to stand by their professed principles and boycott these events.”

When we spoke, Brad Johnson, executive director of the Climate Hawks Vote Civic Action, emphasized how proud he and his organization are of how far the Democratic Party has come on climate.

Democrats have created their most ambitious climate agenda yet, calling for a complete transition to clean energy by 2050 and for the United States to contribute fully to meeting the Paris Agreement’s most ambitious cap on warming at 1.5 degrees Celsius. And though questions remain on how Hillary Clinton’s own stance on climate could meet this goal, API’s agenda—to go full tilt on fossil fuel extraction and stymie regulation—stands directly in its way.

Attendees to API-backed events this week have included higher ups and confidants to the Clinton campaign, from Neera Tanden of the Center for American Progress, to Hillary for America (HFA) Chairman and former White House Chief of Staff John Podesta, to HFA energy policy adviser Trevor Houser. As campaigns are being fought and won to keep big oil out of museums and other cultural institutions, the API’s role in the convention has gone relatively unnoticed. Democrats’ participation, Johnson says, serves to normalize the fossil fuel industry’s role in policy conversations on climate and energy.

“The Democratic Party is our nation’s only legitimate shot here at fighting back the tremendous corrupting influence and power of the fossil fuel industry in politics,” Johnson explains. “We think this is a lapse in judgement.”

In Washington D.C., Johnson notes, tides are starting to turn away from the fossil fuel industry and the climate of denialism they helped build. “I’m hopeful that the blatancy of these events is a sign of desperation,” he said.

Climate Hawks Vote wasn't the only one to take issue with API’s sponsorship. At a Politico-API event on Wednesday, activists disrupted the panel over panelist and Colorado Gov. John Hickenlooper’s support for fracking. A banner—hung outside—read, “Frackenlooper Ban Fracking.”

“We need everyone on this panel to take a strong stance against fracking,” one protester burst out at the panel’s end, joined by a handful of others and noting the extractive process’ impact on indigenous communities. “You’re killing your constituency.”

In contrast to the discord on Wednesday, the mood on an all-male panel Monday seemed to be one of consensus. All agreed that climate change constitutes one of the most pressing issues of our time, diverging on how—and how quickly—to try and slow it. Finkel’s opening remarks pointed out how crucial natural gas production has been to driving down the United States’ greenhouse gas emissions. (This, as Bill McKibben has pointed out, is not true.)

Rep. Henry Cuellar (D-Texas) and Yale Environmental Law and Policy professor Daniel Esty, especially, were quick to denounce the “utterly polarized” conversation on climate and energy, lamenting that the extreme sides have taken over. Transitioning off of fossil fuels, they said, would need to be a gradual process.

“Why not involve the industry a little bit more?” Cuellar asked. “I’m hoping the Clinton administration will be more practical in allowing the industry to have a say.” Cuellar has been a major advocate for fracking in his home state, and his campaign committee has taken in more than $124,000 from the oil and gas industry—its top donor—in the last year.

Esty has served as a sustainability consultant for companies like Coca Cola and Unilever, and is the co-author of a series of books entitled “Green to Gold,” on how corporations can use sustainability to go from “bad guys who made good,” while continuing to turn a profit.

“You cannot do a big thing in our society with a one-party outlook,” Esty railed, in response to a prodding question from Johnson on the ethics of API’s sponsorship.

The panel’s framing offers a mirror—or example—of the fossil fuel industry’s new approach to talking about a warming world. As Politico itself reported, API—under threat of grassroots pressure to keep fossil fuels buried—recently created a task force to overhaul its messaging around a host of climate measures.

API member ExxonMobil has been reading the tea leaves, too. At the end of June, the company announced that it had doubled down on efforts to pass a carbon tax. The declaration coincided with a New York Attorney General Office investigation into the oil giant’s attempt to deceive the public about the existence of climate change, unearthed by a lengthy investigative report released by Inside Climate News last year.

To lighten the mood, perhaps, fortune cookies were offered at the entrance of Monday’s panel, with messages about “Our Energy Fortune.” Mine informed me that “More than 99.999% of oil & products shipped by pipeline arrive safely.”

Handouts placed on tables explored the potential impacts of “Pro-Energy Policies” and “Regulatory Constraints,” without further detail on either category. The latter, apparently—according to an API handout—will suck $133 billion from the United States’ GDP and kill 830,000 jobs by 2035.

I wanted to ask API about those numbers, as well as a slew of other questions. But API has not responded to multiple requests for comment. Finkel, who was present at both panels I attended, declined to comment in person. The communications staffer I spoke with in Washington, D.C. said that getting a comment from API this week would be tough. The reason?

“Everyone is in Philadelphia,” and their schedules are packed.