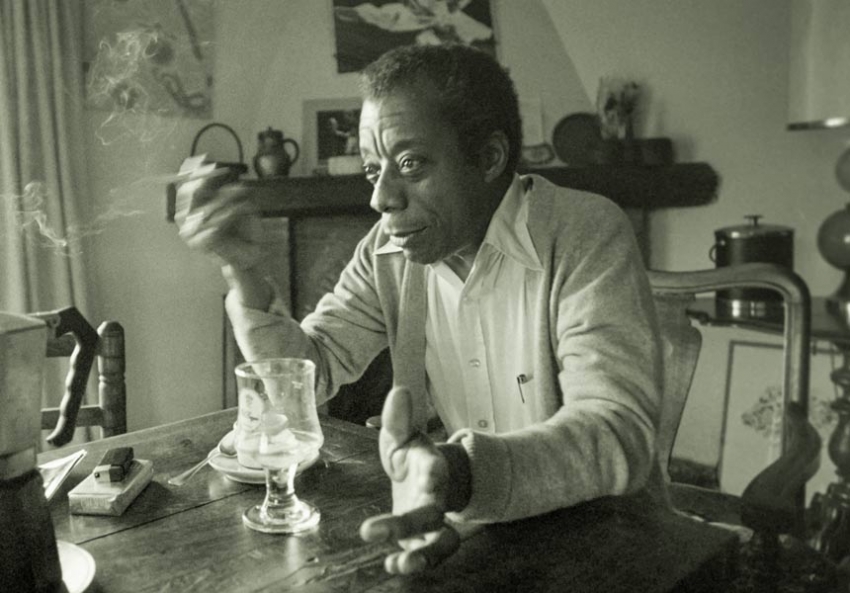 James Baldwin enjoys a cigarette at his home in Saint Paul-de-Vence on the French Riviera, on Nov. 6, 1979. (Ralph Gatti/AFP/Getty Images)

In the essay collection The Fire This Time, a new generation of black writers keeps Baldwin’s flame alight.

That we are all Trayvon Martin is just an iteration of the larger historical truth that black folks today are all the black folk who have come before.

The writer James Baldwin has long been relevant, but in 2016, 50 years after the civil rights movement’s peak, he seems downright prophetic. A poet at his core, Baldwin was that rare and rarefied black critic of his time who expressed hope and fear for the future of black America, and for America as a whole, in equal and passionate measure. In his essays, most famously “The Fire Next Time,” he argued with himself at length about how, and whether, this country could save itself from the white supremacy on which it had been built and to which it continued to cling, the successes of the movement notwithstanding. That question is still on the table, but the consequences of not putting white supremacy to rest have grown in each decade since the 1960s. In our very long history of tolerating one kind or another of terrorism, black folks now find ourselves at what feels like a breaking point.

The black writer’s response to that terrorism—chiefly the fatal shootings and other egregious treatment by police that have crowded news headlines for the last three years, and that have come to symbolize racism in all its enduring forms—is changing, and it’s this change that the new essay collection The Fire This Time seeks to document. These pieces, however, are less fiery than subtle. Like Ta-Nehisi Coates’ prize-winning Between the World and Me, also inspired by Baldwin, these works are rooted in a black dialectic tradition of protest and argument against white oppression, but depart from it by being individually reflective and not primarily concerned, as Baldwin was, with functioning as America’s racial conscience. These writers consciously look inward, charting the sometimes nebulous effects of racism on themselves and their own largely middle-class lives and aspirations, which are still limned by color. The Fire This Time freely weds the political with the personal in unconventional and often lyrical ways; though it takes police abuse as its starting point, it wanders. The book boasts a roster of contributors, mostly Obama generation or younger, that includes celebrated journalist Isabel Wilkerson, essayist Claudia Rankine, poets Natasha Trethewey and Kevin Young, and novelist Edwidge Danticat.

The book is edited by novelist Jesmyn Ward, who also contributes a piece, but I found her introduction more compelling. She sets things off by describing an epiphany she had after the acquittal of Trayvon Martin’s killer George Zimmerman in 2013, which sent her into an almost desperate search to connect with others who shared her outrage at the verdict.

What dawned on her, reading endless media reports, was that many Americans simply didn’t see Trayvon as she physically saw him: a young boy, a child. An innocent. They saw him as an incipient thug, if not an actual criminal. Ward knows this black-thug myth as well as she knows herself—indeed, she suggests they sometimes feel interchangeable. “[The myth] was as familiar to me as my own eyes, my own nose, my own hair, my own fragile chest,” she writes. “It was as familiar to me as the air I grew up in, air as dense and heavy and close and hot as the air Trayvon breathed before Zimmerman shot him.”

That we are all Trayvon Martin is just an iteration of the larger historical truth that black folks today are all the black folk who have come before. That truth is beautifully symmetrical and liberating in one way, unsettling in another. Its complications are evident in Rachel Kaadzi Ghansah’s “The Weight,” about the author’s pilgrimage to James Baldwin’s barely preserved home in Nice, France, a piece that is sharply observed, moody, elegiac—and in which an uneasiness about racial conundrums, past and present, is notably unresolved. Wendy S. Walters’ “Lonely in America” is the most straightforwardly written piece in the collection, almost academic, but is also the most haunting. Walters’ mission to dignify the deaths of black slaves buried and forgotten beneath New England towns highlights the almost unbearable tension between our stoicism, black people’s trained response to loss and invisibility, and our grief, what we actually feel about our past that has never been given any emotional space. “Lonely in America” is also funny in the tragic, absurdist way racism has always been funny to black people—e.g., a sprightly tour guide at a plantation house turns slaves into “servants”; a black laundress's listed value in a slaveholder’s estate is 50 bucks, 10 more than the listed value of the linens she washed. Ironic doesn’t even begin to describe it.

Claudia Rankine theorizes that black folks live in a perpetual state of mourning, because we get killed or savaged so consistently. “The Black Lives Matter movement can be read as an attempt to keep mourning an open dynamic in our culture,” she writes, “because black lives exist in a state of precariousness. Mourning then bears both the vulnerability inherent in black lives and the instability regarding a future for those lives.”

Then there’s “Black and Blue,” Garnette Cadogan’s sublime piece on walking city streets—his favorite pastime—and how the simple human act of wandering and discovery is never simple for black people, especially black men, in urban settings. Walking late at night in his native Kingston, Jamaica, whose streets are far from safe, is less stressful than doing the same thing in New York, where walking is essentially “a pantomime undertaken to avoid the choreography of criminality.” (In These Times reprinted an excerpt of “Black and Blue” on the back page of our September issue.)

Taking another cue from Baldwin, Ward divides the pieces into sections called “Legacy,” “Reckoning” and “Jubilee” that roughly correspond to past, present and future. Yet the divisions, as Ward admits in the introduction, are fairly arbitrary. Living black in America is timeless in that while outward conditions change, the wall of white supremacy that Baldwin named and that we keep running up against has not changed, not yet. But in all the angst and sobering self-exploration is some levity—let’s face it, things wouldn’t be black without it.

Kevin Young’s essay, “Blacker Than Thou,” is full of sly wit and pithy observations, including this one that he makes while ruminating on the meaning of Rachel Dolezal, the white woman from Washington state who passed for many years as black. “Rachel Dolezal could be conspicuously outraged all the time, filing lawsuits, marching,” Young writes, “because she didn’t have to save any energy for just being herself.” Later in the essay he deadpans: “Of course you can see why anyone would want to be black: Being black is fun. Don’t tell nobody.”

Too late. In this probing 21st-century breakdown of what it means to be black, we’re telling everything. It’s about time.

Erin Aubry Kaplan is a Los Angeles-based journalist, essayist and author of Black Talk, Blue Thoughts, Blue Thoughts and Walking the Color Line: Dispatches From a Black Journalista. Her next book, I Heart Obama, is due out next year.