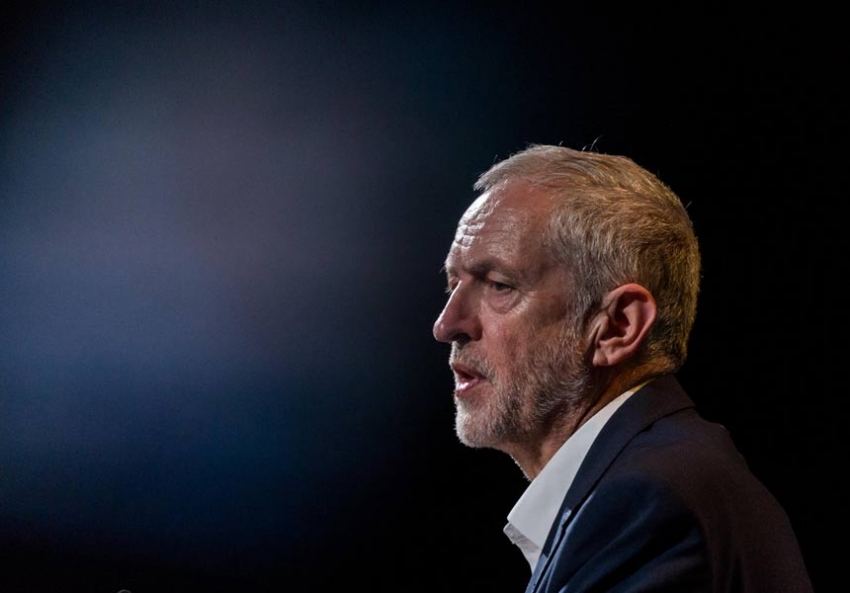 Most Labour MPs want Jeremy Corbyn out, despite overwhelming support for him from the party’s base. (AFP / Getty Images)

Can There Be a Party of the Left in Britain?

Party brass may not like it, but Jeremy Corbyn’s popularity could herald a new era for Labour.

Manufacturing had taken an enormous blow under Thatcher, as had unions. Neither revived under Blair.

We may be watching the Labour Party’s death throes. It gets harder by the day to recall that heady time less than 20 years ago when Labour won the General Election—after 18 years of Tory rule—with a huge majority. So what’s happened? Paradoxically, given its title, Richard Seymour’s Corbyn: The Strange Rebirth of Radical Politics charts a history of the party’s decline.

It’s a long story of successful efforts by the Labour Party establishment to keep its left wing under control and as far as possible from power. Under Tony Blair, the party was firmly centre-right. Yes, there were a few improvements on welfare and taxation, but Blair was in thrall to Thatcherism, and his government did little to reduce inequality and nothing to return privatised industries and utilities to public ownership. Manufacturing had taken an enormous blow under Thatcher, as had unions. Neither revived under Blair.

Some say it was Blair’s 2003 decision to join Bush in invading Iraq and the war’s disastrous aftermath, followed by “the expenses scandal”—MPs were caught getting fat at the public trough—that inspired this country’s current scepticism about politics, as demonstrated by the fact that the electorate has shrunk across all parties.

Then there was the world recession of 2008, which was not the Labour government’s fault. Indeed, Gordon Brown, who was then the prime minister and a vocal opponent of austerity, saved the UK and some of Europe from even greater economic catastrophe, but the recession probably cost Labour the 2010 election. For the next five years, we lived with a coalition government of Tories and Liberal Democrats.

During that period, Labour MPs were weak in critiquing that coalition’s austerity policies, and even promised more of the same. Their defeat in May 2015 owed a good deal to the almost total obliteration of Labour in Scotland and severe inroads made by the far-right UK Independence Party (UKIP).

The errors and misjudgements of Labour MPs let Jeremy Corbyn emerge as the party’s first-ever leader from its “hard” left wing. Corbyn’s candidacy inspired thousands of people, old and young, to join or rejoin the party to support him, as I did. Last summer Corbyn was elected by a huge majority of party members. He stands for nuclear disarmament and a genuine welfare state.

At the moment, there are 229 Labour MPs in the House of Commons and 172 of them want Corbyn out. They insist he is no leader, is incompetent, that he was lukewarm about Europe and is making their party unelectable. As I write, another leadership contest is planned. Again, members are allowed to vote, and about half a million have signed up—though this time, they will have to pay £25 to do so unless they can prove they’re long-term members.

Owen Smith is standing against Corbyn, and is not markedly more charismatic. But the party, most of the press and some of my friends are convinced that a party led by Corbyn is a party of protest, uninterested in power and therefore to be resisted.

There’s been a good deal of name-calling. Corbyn has been called “devious” and “vain” by some devious and vain senior politicians. Len McCluskey, a union boss and Corbyn backer, has called the whole thing “a squalid coup.” Corbyn supporters are accused of throwing bricks through an MP’s office window, while Corbyn himself is said to have locked himself in his office.

Corbyn may win this leadership contest again, in which case it seems likely that the party will split and cease to serve as an effective opposition. If there is a solution, and there may not be, it lies in electoral reform. Our first-past-the-post system, which in the May election resulted in a Conservative government that was supported by only 37 percent of the voters, no longer suits our differences and anomalies. But I doubt there is anyone or any party that will risk all to introduce some form of proportional representation.

I shall vote for Corbyn because of his policies, because he has inspired a lot of people to return to the Labour Party, and because the parliamentary party has refused to listen to him or to his supporters.

Class Traitors, Welcome to the Revolution