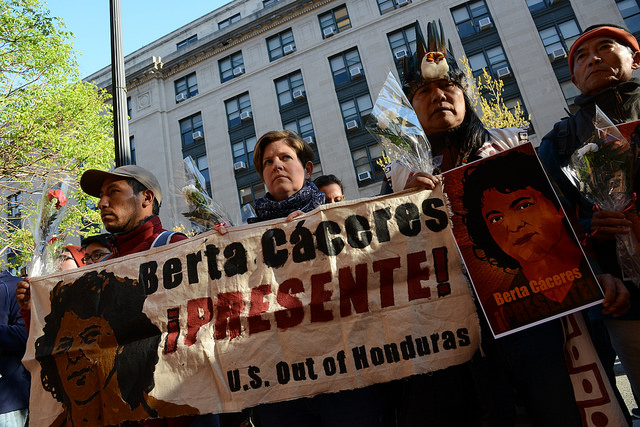 Rep. Hank Johnson talks about the struggle for human rights and the future of U.S.-Honduras relations.

'We’ve got to understand what we’ve been robotically doing over decades—and the fact that it’s not working.'

Environmental rights activist Berta Cáceres feared for her life and for the lives of her fellow activists in Honduras. She traveled to Washington, D.C., in April of last year to voice those concerns, and pleaded her case to various lawmakers, including Georgia Rep. Hank Johnson. Less than a year later, her fears became a reality.

Forces stormed Cáceres’ home in the Lenca community of La Esperanza on March 3 and shot her. Cáceres and her colleagues were outspoken about their opposition to a hydroelectric dam being built on the Gualcarque River, sacred land to the Lenca people, by private energy company Desarrollos Energéticos SA (DESA). News of her death was widely condemned throughout the international community, prompting some lawmakers to take action.

In June, Johnson introduced the “Berta Cáceres Human Rights in Honduras Act,” calling for the suspension of U.S. security assistance to Honduras until the government there investigates reports of human rights violations and opens an independent investigation into Cáceres’ death. The bill is supported by some 40 organizations and has garnered more than 30 co-sponsors in the House so far.

In These Times recently spoke with Johnson about the bill and the future of U.S. relations with Honduras.

His interview has been edited and condensed for clarity.

How did you get involved with crafting this bill and introducing it?

I’m very much concerned about human rights issues across the globe, here in America as well as in other places. I first became involved in Honduran issues back in 2012 when there was a drug operation that involved American military personnel—and four innocent civilians were killed at the hands of Honduran security officials, military or internal security. I wrote a letter at that time asking for investigations by the attorney general of the U.S. and also by the State Department. That is what led me to start paying attention to Central American issues.

My interest has continued about Honduras and then I was able to meet Berta Cáceres in April of 2015. She came to my office and we talked about the situation—the human rights issues going on down there in Honduras in so far as indigenous people who are fighting to retain their land, which is being expropriated. On the Gualcarque River, there’s the Agua Zarca Dam that a transnational company was building down there, which actually was stopping the indigenous people who have lived in the area for centuries from being able to sustain themselves. These human rights activists, who were led by Berta Cáceres, were protesting against the construction of the dam on that river and they had been successful in stopping the construction. But there were also a lot of deaths of innocent human rights activists down there that Berta was concerned about when she came here.

Those deaths are at the hands of people involved in the Honduran military and our country sends a lot of money for training Honduran military forces who also end up being security, internal security forces down there. These people are killing their own citizens and are using weapons that America provides. There's a symbiotic relationship between their military and our country.

This legislation seeks to withhold American support for the Honduran military until such time as the Honduran military can clean up its act and get rid of its corrupt officials, and those involved in human rights violations, to become the type of military that would uphold the ideals that our military upholds. So, that’s what the legislation would do—it would withhold military assistance until such time as our policymakers are satisfied that they’re complying with basic human rights norms in Honduras. When you withdraw military assistance, what it does is it influences the best practices of the Honduran military so they can reform themselves and become a better partner to the United States and a better servant to the Honduran people.

We have to go back to the Cold War to see why it is the United States has the policies that it has towards Central and South America. Back during the Cold War, America did not want communism to take root south of our border. Military assistance to dictators and governments of oppression became our norm. When you get people addicted to our military equipment, it’s part of the military industrial complex—you keep people purchasing our weapons and ammunition. We have continued to feed our military industrial complex by arming nations south of our border. The reason that we've been giving (security aid) is to combat the war on drugs, but I think it was probably first as a war against communism. So now we have this war on drugs, which (President Richard) Nixon declared back in 1971, and our country has been fighting this drug war, which has not worked south of our border, and it certainly has not worked here at home.

What we’ve been doing is making the world a more violent place, and we've been propping up dictators and government corruption south of our border through trying to fight a drug war. We've been trying to stunt production south of the border while we’ve been militarizing the streets of America in an effort to fight demand. It's a war on two fronts, fighting production and fighting demand, and neither war has been successful. It's really time for our government to start looking at a new policy for fighting drug addiction in our country. It’s a public health issue as opposed to a criminal justice issue, primarily. We’ve got to understand what we’ve been robotically doing over decades—and the fact that it’s not working.

Why should the American people care? With all that is going on in the world, why should the “Berta Cáceres Human Rights in Honduras Act” be a priority?

Well, it's a small step in a new direction that promotes human rights as opposed to sending weapons of war across the world. In other words, if Americans want to see a more peaceful world it means that we have to change some of the policies that we promote throughout the world. One of those policies has to do with providing weaponry to governments that then turn around and use that weaponry against their own people. We wouldn't want that to happen in our country. If we lived in Honduras, we would not want that to be happening in our country. We have to sometimes step back … and take a look at what's going on in the lives of others and what creates conditions that prevent other people from being able to fully contribute to the global economy.

If Americans are so concerned about illegal immigration, this is one of the causes, one of the drivers of people to our border. Violence caused by human rights abuses and the war on drugs south of the border, it drives illegal immigration and so Americans that are concerned about illegal immigration should look at this as something that will help stop it. And for other Americans, who are concerned generally about how our military assistance helps to promote either war and violence or peace and prosperity, this is a step forward to make the world a more humane and safe place—even if that's happening in another country. We’re concerned about that because we understand that we live in a global community and people are interrelated and interdependent upon each other. We understand the bigger picture.