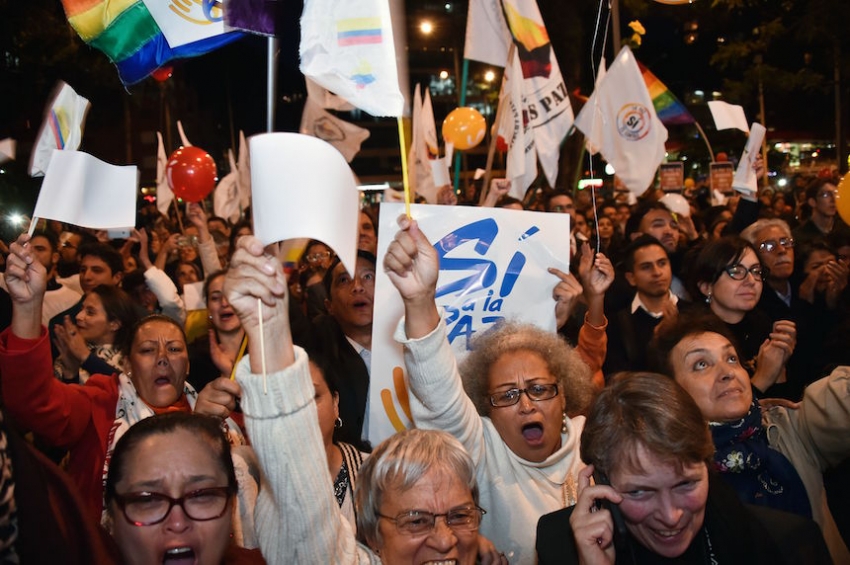 Generations of Colombians celebrate as they watch a broadcast of the signing of the treaty between the Colombian Government and FARC rebels. (GUILLERMO LEGARIA/AFP/Getty Images)

On October 2, Colombia’s citizens will vote to either accept or reject the agreement.

"It is the time to give peace a chance."

After almost four years of negotiations and over 50 years of war, Colombia's rebel FARC group and the government finally signed a peace accord in Havana, Cuba, late Wednesday.

“We won the most beautiful of all battles: Peace,” said the rebel group's top negotiator, Iván Márquez.

“The war is over,” the Guardian quotes Humberto de la Calle, chief government negotiator, as saying after signing the deal. “It is the time to give peace a chance.”

“Today marks the beginning of the end of the suffering, the pain and the tragedy of the war,” Colombia President Juan Manuel Santos said in an address to the nation after the announcement in Havana.

Colombia's government will hold a plebiscite on October 2 for citizens to either accept or reject the agreement.

“It's in your hands, of all Colombians, to decide with your vote to support this historic accord that puts an end to this long conflict between the children of the same nation,” Santos said, according to the Associated Press.

The terms of the accord are not necessarily approved of by all Colombians, the Guardian reports:

Under the agreement, the government commits to development programs and addressing gross inequalities in the country's long-neglected rural sector. It also agrees to widen the opportunities of political participation to smaller political movements, including the party that a demobilized FARC may create.

The FARC agrees to help dismantle and discourage the business of drug crops and trafficking that helped sustain its war financially for the past three decades.

The deal also includes reparations to victims and sets up a transitional justice system for crimes committed during the conflict. FARC members who committed or ordered atrocities but confess their crimes will avoid serving their sentences in jail, instead performing “community service” projects and acts of reparation.

“That point is at the center of controversy surrounding the accords,” the newspaper notes. “Critics say the accord should be renegotiated to include jail time for crimes against humanity and a ban on those convicted of such crimes from holding public office.”

Polls show the plebiscite vote is currently tied between those in favor of the deal and those opposed.

The peace accord has been negotiated since November 2012. A draft of the agreement's terms was released last fall, and the official signing of the deal follows a historic ceasefire declared in July.

The last serious attempt at a peace accord in the 1980s failed when right-wing death squads gunned down 3,000 members of a pro-FARC party, NPR notes.

The U.S. has long fought the FARC in Colombia, even going so far as to fund right-wing death squads under the Clinton administration in the 1990s, and in recent years helped Colombia's right-wing government “torture, spy on, and kill” FARC rebels, a 2013 Washington Post investigation revealed.

Nika Knight is an assistant editor and staff writer for Common Dreams. Prior to joining Common Dreams in 2016, Nika worked as a freelance writer and German translator. Her writing and reporting has appeared in Grist, Guernica, Narratively, and other places. She recently finished an MFA in nonfiction writing and literary translation at Columbia, and she has translated works of German fiction for Seagull Books and New York Review Books. Email: nika@commondreams.org. On Twitter: @nikaknight