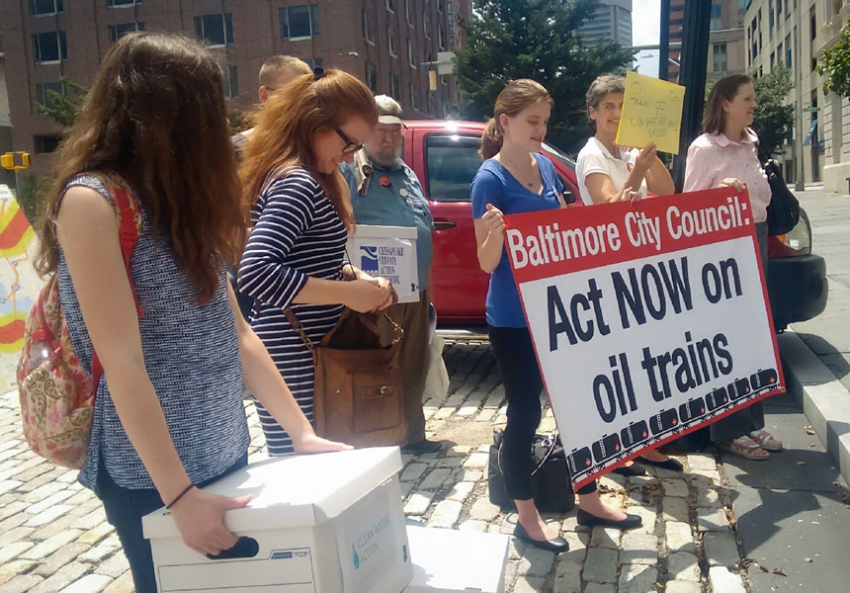 Anti-crude advocates are at a disadvantage, Edler adds, because federal rail safety law generally preempts local regulations. “The city of Baltimore couldn’t ban Bakken shipments inside the city limits even if it wanted to.”

Bakken crude oil was largely unknown to the general public when a 2013 railroad explosion and fire killed 47 residents of the tiny Canadian border town of Lac-Mégantic. Bakken wasn’t often mentioned on the streets of Westport in South Baltimore, where crime, poverty and deteriorated housing seemed more urgent. But Westport is a throughway for the dangerously flammable oil shipments, and a coalition of climate-change campaigners, social justice activists and rail safety reformers have been trying to make Bakken a household word.

Keisha Allen, president of the Westport Neighborhood Association, first heard of Bakken in December 2013 when a CCAN campaigner presented to her community. Allen was startled to learn that railroad giant CSX commonly routes Bakken shipments near her home and neighborhood. By CCAN’s estimate, some 165,000 Baltimoreans live in the “impact zone.”

“We are sitting ducks,” Allen says as she drives along Annapolis Road, just southwest of the Baltimore Ravens’ stadium and the glittering new Horseshoe Casino. She bumps over CSX tracks just a few hundred feet from Colleen’s Corner Tavern, where her neighbors often relax as the trains rumble by.

Baltimore has its own history of rail disaster: The 2001 Howard Street Tunnel fire fumed downtown for five days after a CSX chemical tanker derailment. And Lac-Mégantic is one of several Bakken-related train fires.

It is a fact of modern industrial life that railroads route dangerous cargo through densely populated urban areas, says Fritz Edler, a retired locomotive engineer active in workplace safety issues with Railroad Workers United. But, according to Edler, railroad companies often fail to pay adequate attention to safety issues. Bakken is even more dangerous and volatile than most other types of crude oil, he says. “A lot of people are wound up.”

Anti-crude advocates are at a disadvantage, Edler adds, because federal rail safety law generally preempts local regulations. “The city of Baltimore couldn’t ban Bakken shipments inside the city limits even if it wanted to.”

That means campaigners have to take an indirect approach. Allen is agitating for new safety measures that can be mandated by the city, such as large warning signs on the streets and a well-publicized safety plan.

Even as activists ratchet up public demonstrations, the Baltimore City Council has moved frustratingly slowly, Allen says. “We have to do something. We can’t just sit here and do nothing.”

Another approach connects Bakken shipments to air quality law. Leah Kelly, a lawyer with the Environmental Integrity Project (EIP), explains that in addition to the threat of explosion, emissions connected to the oil transit process have been linked to asthma and other respiratory problems, which are already common in Baltimore. When oil and gas company Targa Resources applied for a permit to ship crude oil, EIP attorneys filed legal comments raising concerns, and the Maryland Department of the Environment (MDE) asked Targa for more information. “This stuff enters the atmosphere,” Kelly says. Baltimore residents “have every right to know what is happening [and to object.]”

Targa did not provide the requested information and withdrew its emissions permit application in July. While Targa didn’t get its permit, another company, Axeon, currently ships crude oil in Baltimore. In 2015, a Baltimore Circuit Court judge ruled that MDE could make public information on Axeon’s activities—a disclosure Axeon had tried to prevent—revealing that over 50 million barrels are shipped through the city annually. Neither Axeon nor Targa also responded to requests for comment.

Right now, according to Edler, the volume of Bakken rail shipments is falling, as the current glut of oil on the market makes Bakken less profitable. But it’s important to press the issue nevertheless, he believes, as shifting market conditions could easily send massive new shipments nationwide.

“Oil prices will inevitably go higher,” says CCAN founder and director Mike Tidwell, and shipments will increase.  “We have to demand from the Baltimore City Council the new safety measures that are needed” to prevent a repeat of Lac-Mégantic, he says. CCAN is also working with Maryland State Delegate Clarence Lam on legislation to increase transparency and boost safety requirements.

The next steps are to press local officials with even greater urgency, Tidwell says. Those who promote and profit from Bakken crude are counting on public complacency, he says, and alliances like the one in Baltimore are the only thing standing in their way.