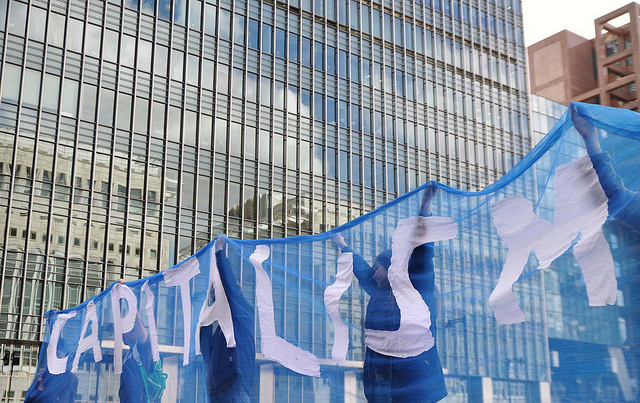 The transnational capitalist class thesis has been caricaturized by some critics as suggesting that contradictions between nation-states have disappeared into a global class-against-class scenario. Harris takes on this idea directly and with a level of detail that, on those grounds alone, makes his work a must-read book. (Darren Johnson/ Flickr)

Why Today’s Neoliberal Global Order Is Incompatible With Democracy

A new book by Jerry Harris explores the transformation of global capitalism and its implications.

"Harris offers his book as both an analysis of the growth of neoliberal globalization and a cautionary note on the dangerous road that it has placed before humanity."

In the years since the Cold War and the collapse of the USSR, the U.S. Left has sensed that something was morphing within global capitalism. This “something” was described more by its symptoms than by its essence, e.g., deindustrialization. In much of the rest of the world there was a growing awareness, however, that a particular form of capitalism was becoming dominant on a world scale, a form that came to be known as neoliberal capitalism or neoliberal globalization.

Jerry Harris offers his book, Global Capitalism and the Crisis of Democracy, as an instrument to better understand this transformation of global capitalism and its implications. Most of the book is devoted to helping the reader better grasp what Harris argues is the historical transition—underway—from capitalism centered around the nation-state to global capitalism. This work is successful, enlightening and engrossing. In the final two chapters, however, Harris shifts gears, laying the basis for a problem that I’ll discuss below.

The thrust of Harris’s argument is that since World War II, but especially since the late 1960s/1970s, capitalism, which as a system is always in need of expansion, has been evolving in such a manner that it transcends national borders. Contrary to theorists, such as the late Ellen Meiksins Wood, this is not a return to the era of high-level trade that marked the pre-1914 capitalist world (what some theorists have described as an earlier globalization). Rather, it is the emergence of an unprecedented interpenetration of capital on a global stage.

And with this interpenetration we start to see, over the last several decades, the rise of what has come to be termed as a “transnational capitalist class.” This class, as the name implies, is not rooted in one country but has assumed an identity that goes beyond specific nation-states. As Harris make clear, this does not mean that the nation-state no longer holds any importance—which is the thrust of the argument offered by Michael Hardt and Antonio Negri in their famous work, Empire—but that the role has shifted significantly, to a great extent servicing and serving the needs of the transnational capitalist class.

This analysis clashes with more traditional arguments on the Left but it speaks to matters that the traditional analyses have been unable to explain fully. A case in point was the U.S.-led invasion of Iraq. At the time of the 2003 invasion, much of the Left and the progressive anti-war movement argued that this was an effort, in effect, to recolonize Iraq under U.S. domination and seize its oil. In the aftermath of the invasion, however, something odd happened. Occupation forces opened Iraq up for business to global capitalism rather than reserve it for the United States alone.

The transnational capitalist class thesis has been caricaturized by some critics as suggesting that contradictions between nation-states have disappeared into a global class-against-class scenario. Harris takes on this idea directly and with a level of detail that, on those grounds alone, makes his work a must-read book.

Harris lays out his case in describing the development of global capitalism and the transnational capitalist class in the first three chapters. In chapters 4 and 5, he offers a marvelous examination of two concrete situations: Ukraine and China. With regard to Ukraine, Harris digs behind the headlines and looks at the class forces on both sides, the relationship that they have with capitalist class forces in other parts of the world, historic nation-state tensions and the wild card of right-wing populism and neo-fascism that is infecting both Russia and Ukraine. He examines the interrelationship of these forces in a situation—and world—that is undergoing a transition. And therein lies the key to understanding the transnational capitalist class thesis: It speaks to a phenomenon that is emerging and transitioning, rather than a phenomenon that is fully and totally developed.

Harris’ examination of contemporary China is just as illuminating and satisfying. Again, he examines the connections that the Chinese capitalists have developed with others in the transnational capitalist class, including the role of the Chinese State—ironically led by a party that calls itself “Communist”—in the integration of the Chinese economy into the larger global capitalist economy. Harris, along with other theoreticians of this school, argues that many—though not all—of the contradictions we are witnessing between China and the United States are a reflection of the efforts by Chinese capitalists, and their allies, to alter the terms under which global capitalism operates. In other words, the conflict is not a competition between traditional empires but, analogically, disputes within a gang.

Harris offers his book as both an analysis of the growth of neoliberal globalization and a cautionary note on the dangerous road that it has placed before humanity. Perhaps it is for that reason that his final two chapters examine alternatives to neoliberal globalization, including both failed alternatives as well as sources of hope. The problem is that this comes across as two different books. While it was clear that Harris was trying to get the readers to consider how to struggle against global capitalism and its tendency towards authoritarianism and barbarism, there was a missing transition.

Harris might also have been more successful had he integrated into his discussion a deeper analysis of the rise of right-wing populism (including but not limited to neo-fascism) in the context of neoliberal globalization. After all, right-wing populism posits itself as THE alternative strategy of neoliberal globalization. While Harris acknowledges right-wing populism at various points in the book, he tends to merge it a bit too quickly with other segments of the Right, including into what the theoretician Nicos Poulantzas referenced as “authoritarian statism” and what I have described as “neoliberal authoritarianism.” Drawing from Poulantzas, I would distinguish the movement towards authoritarianism by the so-called democratic capitalist state as not identical with the rise of right-wing populism, though the two tendencies can and do overlap.

Despite the abrupt transition, Harris’s discussion of alternatives is useful, though a bit of a distraction. In fact, I would argue that he should further develop his thinking on alternatives in a separate volume. And I would further argue that a deeper examination of right-wing populism in the context of neoliberal globalization deserves to be addressed by adherents to the so-called global capitalism school in order to flesh out their analysis.

Global Capitalism and the Crisis of Democracy is an exceptionally thorough and thought-provoking work. Very rarely, these days, do I use a highlighter when reading a book in order to remind myself of facts, points of interest or points of difference. In this case, the highlighter was with me till the end, with my knowing that I will return to this book as a resource for better understanding, as well as explaining, the development of global capitalism and its implications for the billions of people on this planet ravaged by it.