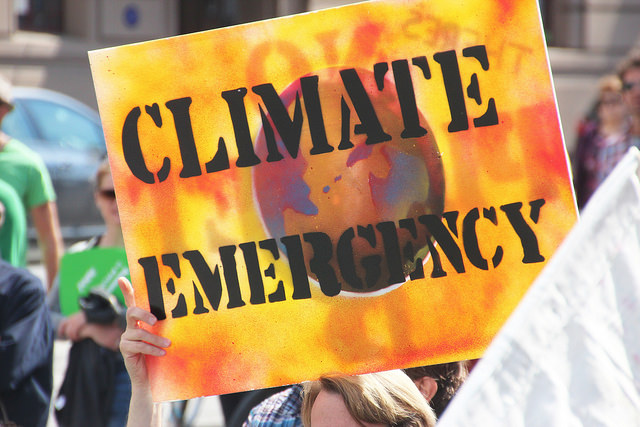 Trump’s economic plan is a love letter to coal, oil and natural gas executives. Clinton’s proposals for energy and the environment are leagues better, but they remain drastically out of touch with science’s ever-bleaker demands. (Takver/ Flickr)

Hillary Clinton Is in Her Own Form of Climate Denial

New data show the need for much more aggressive policies.

"Trump's candidacy has set the bar on climate for Hillary Clinton so low she might trip on it."

Amidst increasingly dire climate projections and Hurricane Matthew’s global warming-fueled devastation, the only mentions of the environment in this week’s vice-presidential debate lasted—generously—for all of five seconds.

“Yet again,” 350 Action Executive Director May Boeve wrote in a statement Tuesday, “tonight’s debate moderator dropped the ball on climate change. Silence is another form of denial and the TV networks are doing the public a great disservice by ignoring the issue, especially when there are such clear differences between the candidates.”

Given those differences, the most profound impact of Donald Trump’s campaign in terms of the climate may not be that he hopes to scrap the Paris Agreement, officially ratified by a critical mass of world governments Wednesday. It’s that his candidacy has set the bar on climate for Hillary Clinton so low she might trip on it.

The Paris Agreement has now passed the threshold needed to trigger implementation. Seventy-four countries—accounting for 58.8 percent of global emissions—have ratified the agreement, meaning it will go into effect November 4. Just before the U.S. election, then, world governments will officially endeavor to keep warming below 2 degrees Celsius while “pursuing efforts to limit the temperature increase to 1.5 °C,” per the agreement’s text.

Should every nation that agreed to the pact last December eventually ratify it, the best case scenario puts the planet on track to raise temperatures by about 3 degrees Celsius above pre-industrial levels by 2100. That future is predicted to leave 4.5 billion people worldwide exposed to heatwaves and create a devastating loss of arable land. Storms like Hurricane Matthew will become both more likely and more devastating as sea levels rise. Coastal cities like New York will become virtually uninhabitable, and food will be scarcer—especially in parts of the world where it already is. The places hit hardest by global warming now will bear the brunt of the pain.

That’s bad enough. What’s worse is that the climate models countries are basing their commitments off seem to exist in a fantasy land.

“There’s quite a gap,” says Glen Peters, “between where we are, what’s been pledged and where we need to be.”

Peters is a senior researcher at Norway’s Center for International Climate and Environmental Research (CICERO) and one of the world’s leading experts on climate modeling. Most of the warming scenarios world leaders use to understand climate change, he explains, rest on the assumption that there is already a prohibitive global price on carbon as well as so-called negative emissions technologies, like bioenergy and carbon capture and storage, or BECCS.

As of now, neither exists. In order to cap warming at 1.5 without BECCS, Peters tells In These Times, “You would have to shut down every coal and gas plant in the U.S. in the next 10 years.” On the same timeline, “You couldn’t have a single petrol car in the U.S., and the same for India, for China and for every country in the world. While you remove those, you have to build up new infrastructure, wind turbines, solar panels … a completely new car fleet, and so on,” all of which would require massive public and private investment.

“Getting to zero emissions in a single country in 10 years is over the top difficult,” he said. “I don’t think it would be possible without any carbon dioxide removal.”

Peters’ research shows that getting to the 1.5-degree target leaves the world with a strict mandate to emit no more than 200 billion tons of carbon dioxide. That's the same as about five years of emissions at current levels. Upping the target to 2 degrees expands the allowance to 850 billion tons. Given today’s technological and political constraints, staying within that limit is “possible,” Peters argues, “but only in a model.”

Undershooting 2 degrees—assuming (optimistically) that BECCS won’t be available until midcentury—means no new mines, pipelines, gas wells or oil rigs, according to a sobering new study from Oil Change International. It also means shuddering existing ones as soon as possible.

“If the current mines and wells that are currently in production are allowed to continue into their full lifespan we’ll blow past the 1.5 and 2 degree needs,” says David Turnbull, campaigns director at Oil Change USA. “We need to swiftly transition away and look at where it might be possible to shut down mines early.”

“The biggest gap between science and politics today,” he said, “is this feeling that we don’t need to stop digging fossil fuels out of the ground.”

Trump’s economic plan is a love letter to coal, oil and natural gas executives, threatening to emaciate the Environmental Protection Agency and ramp up every form of extraction imaginable. Clinton’s proposals for energy and the environment are leagues better, but they remain drastically out of touch with science’s ever-bleaker demands. Outside of a handful of new methane regulations, a commitment to cut subsidies to the fossil fuel industry and a pledge to stand by the Clean Power Plan, nearly every proposal is on the consumption end of the carbon budget—things like restricting energy waste in American homes and improving energy efficiency in cars and buildings. Production goes largely unquestioned.

There are promises to mend pipelines and build safer natural gas wells, along with stipulations for project labor agreements “to ensure new pipelines are built to the highest standards and support broad-based local economic development.” Among the noticeable absences from Clinton’s plan are a moratorium on fracking, an end to all fossil fuel exploration, a ban on extraction on federal land and its rapid phase-out everywhere else. Similarly missing is the change scientists are calling for most loudly: A carbon budget.

Of course, there are gaping differences between what a Clinton and Trump administration would mean for climate policy in the United States. Largely thanks to the climate movement’s urging, Clinton’s plan contains several key steps to clamping down on emissions. But there is also no scenario in which Clinton both keeps fossil fuel executives happy and enacts a climate plan that’s anywhere in line with the planet’s own timeline.

Along with several other green groups, 350 Action and Oil Change USA have backed Clinton, although they are under no illusion about what she’s likely do in the Oval Office. As Boeve put it, “We’re not endorsing Secretary Clinton—we’re endorsing our movement … November 8 is a vital day—but November 9 is just as vital.”

Even before then, it seems climate could occupy a bigger spot in the Clinton campaign than it has since the primaries. Focus groups for the campaign have identified the environment as a key wedge issue, something that could set Clinton apart from Trump among voters likely to tilt toward third parties without inspiration from her on the issues that matter to them. It’s especially key among young voters, who are showing surprisingly high levels of support for Gary Johnson and Jill Stein.

To draw in millennials skeptical of the political system and passionate about climate change, Clinton staffers made the baffling move of tapping Al Gore, Bill Clinton’s 68-year old former vice president. It’s a desperate move but a telling one: Clinton needs climate voters, and she’ll be working until the election to woo them. If it pays off, Clinton could be elected with the strongest popular mandate to take on climate change of any president in U.S. history.

Asked about his post-election plans, Turnbull says the first step “is to make it abundantly clear to whoever’s president that it’s not an either-or proposition. We can’t just invest in renewables. It’s imperative that we address limiting supplies of fossil fuels as well.”

“The good thing,” he adds, “is that there’s an incredible movement out there that gets that.”