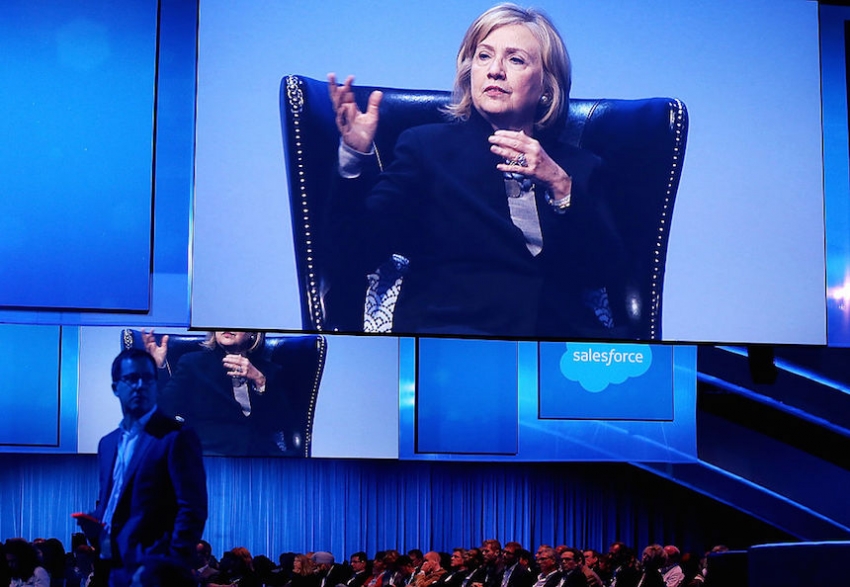 Confirming progressives’ suspicions, Clinton is shown hewing to the center on banking and entitlements.

Obama campaigned as a candidate who would get tough on Wall Street. But upon taking office, he immediately set about staffing his economic team with Wall Street-friendly industry insiders.

Nearly nine months ago, Hillary Clinton was first asked to release the transcripts of her paid speeches to Wall Street firms, for which she received $225,000 a pop. Speculation abounded about just what she said at the closed-door events. “Now if you give a speech for $225,000, it must be a pretty damn good speech,” Bernie Sanders remarked back in April. “And that is why I believe Secretary Clinton should share that speech with all of us.”

Now, thanks to the latest WikiLeaks release, the public has finally been able to read what appears to be a sampling of the speeches’ contents. A Clinton campaign staffer had excerpted the most politically damaging sections back in January, which were leaked last week. The excerpts suggest that if elected president, Clinton would carry on many of the Obama administration’s worst tendencies on Wall Street and economic issues.

In several speeches, Clinton spoke of the need to let Wall Street reform and regulate itself. In a speech given to Deutsche Bank in October 2014, speaking of the need to reign in “excesses in the economy,” Clinton told attendees: “Today, there’s more that can and should be done that really has to come from the industry itself.”

The year before that, at a Goldman Sachs-sponsored symposium, Clinton discussed the need to strike the right balance on financial regulation: not too little and not too much. “How do you get to the golden key, how do we figure out what works?” she said. “The people that know the industry better than anybody are the people who work in the industry.” In the same speech, Clinton called the idea that the U.S. banking system caused the 2008 financial crash an “oversimplification.”

These words suggest that as president, Clinton is likely to follow Barack Obama’s lead when it comes to financial regulation. Obama campaigned as a candidate who would get tough on Wall Street, and early in his term continued criticizing the “fat cat bankers on Wall Street” who “don’t get it.” But upon taking office, Obama immediately set about staffing his economic team with Wall Street-friendly industry insiders.

Obama’s appointments were the very epitome of the philosophy that “the people that know the industry better than anybody are the people who work in the industry.”

Obama named Timothy Geithner, for instance, as his Treasury Secretary. Geithner, who became known to bankers as their “man in Washington,” was a protégé of Robert Rubin, a former Citigroup chairman and Goldman Sachs CEO. As Bill Clinton’s Treasury Secretary, Rubin had worked to prevent the regulation of the very same derivatives market that contributed to the 2008 crash, as well as pushed to repeal the Glass-Steagall Act that for decades had kept investment and commercial banking separate. Its repeal helped pave the way for the massive, hyper-complex banks that became too big to fail and, if it didn't cause the 2008 crash, it certainly deepened the crash's impact.

In addition to this, Larry Summers, also a Rubin understudy who had helped Rubin prevent derivatives regulation in the ‘90s, was named senior White House economic adviser. Rubin’s son, James, and Michael Froman, another Citigroup executive, were tapped by Obama to name his economic team. He also re-nominated Bush appointee Ben Bernanke as chairman of the Federal Reserve and later appointed Mary Jo White, a former partner at a Wall Street defense firm, as head of the SEC.

“Some of the early nominations that he made were also comforting to Wall Street,” Wall Street lawyer Rodgin Cohen later said. “Wall Street viewed Geithner, Bernanke, Summers as a commitment by the incoming administration to balance a centrist view, not leaning way to the left.”

Geithner, who reportedly was in contact with the CEO of Citigroup as he helped design the Bush administration’s bank bailout in 2008 and throughout the Obama administration's subsequent response to the financial crisis, ensured that financial institutions would receive billions of dollars with no strings attached, while poor homeowners received a fraction of the total bailout funds.

Not only that, but the Obama administration failed to criminally prosecute senior Wall Street executives for the widespread fraud that helped tip the U.S. financial system into collapse, despite mountains of evidence.

Perhaps most notoriously, the Obama administration failed even to prosecute HSBC Bank for helping Latin American drug cartels launder billions of dollars due to its large size and “systemic importance”—the doctrine of “too big to jail.” The administration also declined to break up the largest financial institutions, leaving, as Bernie Sanders frequently alluded to in his speeches, 11 of the top 15 banks that received bailout money in 2008 bigger now than they were when they were originally considered “too big to fail.” Today, the unregulated derivatives market continues to grow, while hedge funds are turning to new risky financial products.

Much as Obama raised more money from the financial industry in 2008 than any other candidate in history, Clinton has raked in by far the most money from Wall Street this election season, with nearly one third of total Wall Street donations in 2015 going to her campaign. Couple that with Clinton’s private comments to members of the industry, and it’s difficult to see why the outcome under a Clinton presidency would be any different than an Obama one.

Clinton looks to be following Obama’s legacy in another way, as well. In two separate speeches, Clinton praised the work of the Simpson-Bowles Commission, set up by Obama in 2010 as part of his ongoing quest to create a “grand bargain” with the Republicans to cut the national debt. The unpopular plan, drawn up by former Republican Senator Alan Simpson and former Clinton Chief of Staff Erskine Bowles, failed to get enough support in Congress and died.

In a speech for financial services firm Morgan Stanley in April 2013, Clinton told the audience that the commission “put forth the right framework.” While the “specifics can be negotiated and argued over,” she said, “the big elements of it were right,” namely its aim to restrain spending, create adequate revenues and incentivize growth.

The Simpson-Bowles plan was a classic case of “centrist” deficit cutting that squarely took aim at “entitlements.” It would have raised the retirement age, cut Social Security benefits by changing the inflation formula and raised the Medicare eligibility age, all while cutting the corporate tax rate. At the time, economist Paul Krugman—an ardent Clinton supporter—called it a “terrible” plan that was “something the center-right and the hard right can agree on,” and charged that the Beltway insiders praising the plan were “the same people who told us that Paul Ryan was the answer to our fiscal prayers.”

Some have argued that Clinton was merely praising the general aims of the commission in the speeches, rather than the specifics of cutting Social Security. Devoid of context, this may sound reasonable. But the Simpson-Bowles plan cannot be separated from its goal of cutting welfare programs.

According to its two architects in 2012, the deal would have been the perfect moment to “do something big to reduce the deficit, reform our tax code and fix our entitlement programs.” Or as Bloomberg put it in describing Simpson and Bowles’ road trip around the country lecturing Americans about the plan: “Audiences get an earful about Washington profligacy, the political system’s cowardice and the need to take an ax to a whole array of supposedly sacrosanct programs.”

When you combine that with the fact that the campaign to push the plan was financed and chaired by executives from Wall Street firms like Goldman Sachs, JP Morgan Chase, Citigroup and, yes, Morgan Stanley—the very firm to whom Clinton was singing the praises of the plan (and on whose board Bowles sat)—it beggars belief that she was not supporting the commission’s vision of slashing “entitlements.”

The Clinton campaign has tried to make a virtue out of following in Obama’s footsteps throughout the election cycle, framing itself as the inheritor of the Obama administration’s legacy. Unfortunately, as Clinton’s private words to her Wall Street financiers make clear, that means also embracing some of the administration’s most harmful policies.