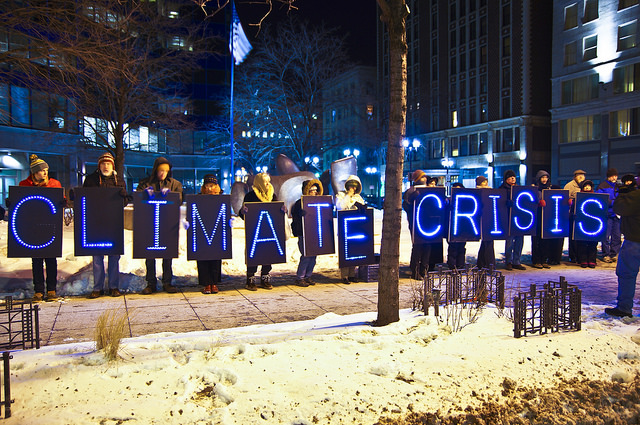 A new proposal suggests that taking over coal, oil and natural gas companies could be the best way to take them down. (Joe Brusky/ Flickr)

Could a Socialist Plot Save the Planet?

Nationalization could slow the climate crisis. But email leaks show how hard a sell it will be to a Clinton administration.

'You’d need a manageable plan over five years or so to buy and phase out these companies. That’s doable under public ownership and it’s probably not doable using regulation, given how powerful these companies are.'

For those concerned about the future of earth and the people living on it, there are plenty of things to be worried about in the latest round of email leaks about Hillary Clinton: her hawking natural gas as a “bridge fuel,” praising oil and gas exports and admiring Canada's pipeline and extraction-heavy energy agenda. Much of this, though, will come as no surprise to those who have followed Clinton’s career, including her well-documented role in selling fracking to the world as Secretary of State. And even given her many faults on energy and the environment, there remains a yawning divide between Clinton’s climate policies and those of her opponent, Donald Trump, who promises to re-open shuttered coal mines and has called global warming a hoax invented by the Chinese.

So what do the latest round of WikiLeaks emails tell us that we didn’t already know? They reveal some of the Clinton campaign’s strategy for defeating Vermont Sen. Bernie Sanders in the primaries. With that, the emails offer a behind-the-scenes glimpse into how her administration might approach the climate crisis—and what policy measures could get left off the table. In demonizing Sanders’ proposals as spendthrift socialism, Clinton may be foreclosing on a potentially key tool for capping emissions: Nationalizing the fossil fuel industry.

Like socialism, nationalization has been a taboo word in American politics since the Cold War and before, conjuring up images of disastrous five-year plans and authoritarianism. But a new proposal suggests that taking over coal, oil and natural gas companies could be the best way to take them down. It’s bold and exorbitantly expensive and might just work. But nothing could be farther from the Clinton campaign’s thinking—on either climate or the economy.

Crafting their line of attack against Sanders, campaign chairman John Podesta and Clinton’s senior staff sought to paint Clinton as the more reasonable and pragmatic of the two candidates. On Wall Street reform, for instance, advisors looked to foster a public common ground between the two candidates, arguing that Clinton had the more realistic plan to reign in the banking industry. (“We don't need to prove he's bad on Wall Street … that’s not really credible,” one staffer wrote. “We need to prove we're ok.”) Their key differences, the campaign insisted, were on tactics, not goals. In a few cases, these offensives veered into outright red-baiting, targeting Sanders’s self-described Democratic Socialism.

In a message to senior campaign staff, Lanny Davis, Clinton’s special counsel, proposes organizing a “Sanders Truth Squad” of Clinton surrogates to flood cable news shows and “challenge Sanders on his non-facts and misleading ‘free’ proposals that will substantially raise middle class taxes or leave Millennials with trillions of dollars of debt to pay off for the rest of their lives.”

Stating that “most of our attacks haven't been working” in one email, longtime Clinton advisor Mandy Grunwald laid out a series of digs at Sanders to be deployed in the days after the New Hampshire primary, which Sanders won in a landslide. “Why not use the old stuff,” she writes, “to prove how wacky this thinking is?”

The first suggestion, entitled “YOU PAY FOR SOCIALISM,” advises that Clinton go after Sanders on the basis of how much his reforms—from free healthcare to free college to expansions in Social Security—could cost taxpayers.

“Bernie Sanders says he wants to restructure America’s economy to make it work like it does in the socialist countries of Europe,” the memo reads, “But Sanders does not mention that the middle class picks up the bill in these countries, paying nearly sixty percent of their income in taxes.”

Other suggestions go on to accuse Sanders’ plans of increasing government spending by 50 percent and deceiving voters as to the true cost of his proposals.

The same memo warns that Sanders “proposed the complete government takeover of all oil companies, gas companies, electric utility companies, phone companies, health care companies, and all television networks.” The jab is a reference to Sanders’s time in Vermont’s Liberty Union Party (LUP), where he served as party chair in the early 1970s before leaving in 1977. At a rally in 1973, he challenged his state’s congressional delegation to “give serious thought to the nationalization of the oil industry,” and later called for a “public takeover of all privately owned electric utilities in the state.” After leaving the LUP, to run for office as an Independent, Sanders continued to call for nationalization, though softened on the question over the years until it faded from his agenda entirely.

For some, though, nationalization is not such a radical proposal. A new working paper from the Next System Project (NSP)—authored by Gar Alperovitz, James Gustave Speth, Ted Howard and Joe Guinan—outlines a plan for the U.S. government to take over the fossil fuel industry, using $1.15 trillion in public funds to do it. If the red-baiting tactics Clinton’s campaign used against Sanders are any sign, making it happen under her administration will be an uphill battle, to say the least.

What the NSP lays out is quite a bit different. Rather than propping up coal, oil and natural gas firms indefinitely, the authors propose to “take over the companies, wind them down, and do it in a way that does not load the taxpayers with the costs.”

The idea that such a taxpayer friendly purchase is possible is rooted in something called Modern Monetary Theory, a sub-genre of Post-Keynesian economics that holds that governments can print and spend money in a way that isn’t directly correlated to taxes, and with relatively little risk of inflation. “Modern Money,” or fiat currency, isn’t backed by gold, as it was in the United States before 1971. Instead, its creation is controlled by a series of computers housed in the Federal Reserve Bank. More importantly, those decisions rest with the White House-appointed officials who control those computers, like Fed Chairwoman Janet Yellen.

Reigning economic dogma paints a direct relationship between taxes and the federal budget; for every dollar we spend beyond Americans’ collective tax revenue, the national debt grows. Politicians—Clinton and Trump included—compete over who can cap spending and lower taxes the fastest and most fairly across income brackets, while meeting their budget priorities. As Guinan argues, though, “sovereign governments around the world create money out of thin air all the time. It’s the dirty secret of monetary and fiscal policy.”

The federal government spent $3.7 trillion backing major banks and insurers after the financial crisis, effectively nationalizing firms like AIG with a few keystrokes known as Quantitative Easing (QE). That figure puts the seemingly massive $1.15 trillion needed to buy out the fossil fuel industry in perspective, as does the $2 trillion spent on the Iraq War between 2003 and 2014. Absent concerted action, climate change itself could end up costing millennials $8.8 trillion in the coming years.

“Clearly we couldn’t buy and shut down these companies overnight,” Guinan tells In These Times. “You’d need a manageable plan over five years or so to buy and phase out these companies. That’s doable under public ownership and it’s probably not doable using regulation, given how powerful these companies are.”

“If there were another way to beat them that would be great, but we don’t seem to be winning and the clock is running down,” he added.

Keeping warming below the 2 and 1.5 degree Celsius guardrails agreed to at the Paris climate talks last year means leaving the vast majority of the fossil fuel industry’s known reserves buried. This, of course, contradicts that industry’s business model, to find and sell as much coal, oil and natural gas as possible—a model it spends millions lobbying each year to protect. The benefits of such a buyout, then, would be two-fold: Bringing an end to a world-wrecking industry and kneecapping its ability to stymie the transition away from it. Ironically, the move might also result in a better deal overall for fossil fuel executives, who would receive the full value of their companies rather than waiting for them to wither away into bankruptcy under the weight of impending regulations and climate rules.

The last time the U.S. government used QE, it bailed out the banks. If enacted, the NSP’s proposal would bail out the climate—at least to the extent that any one, heavily-polluting nation can. Complimenting the proposal, Guinan suggests, would be a Green Investment Bank created by the Treasury and with bonds taken out by the Fed, using the European Investment Bank as a loose model. Such a bank would allow for the creation, and sustainable funding, of things like an equitable and comprehensive job transition program for fossil fuel workers, a massive scaling-up in renewable energy sources and research and development into new green technologies.

As Guinan admits, there are several pieces left to figure out about such a massive purchase, including its impact on financial markets and—perhaps most urgently—how to make it palatable to a political landscape defined by fear-mongering about deficits and entitlements. While socialism is gaining legitimacy, especially among millennials, Clinton staffers’ tactics in the primaries show just how tough a sell public ownership could be. Key, in this context, will be loosening the dogma around taxes and nationalization that seems to reign everywhere from the far-right to the Clinton campaign. If NSP’s proposal takes root in the climate movement, Sanders might be just the tip of the public ownership iceberg for Clinton post-Election Day.