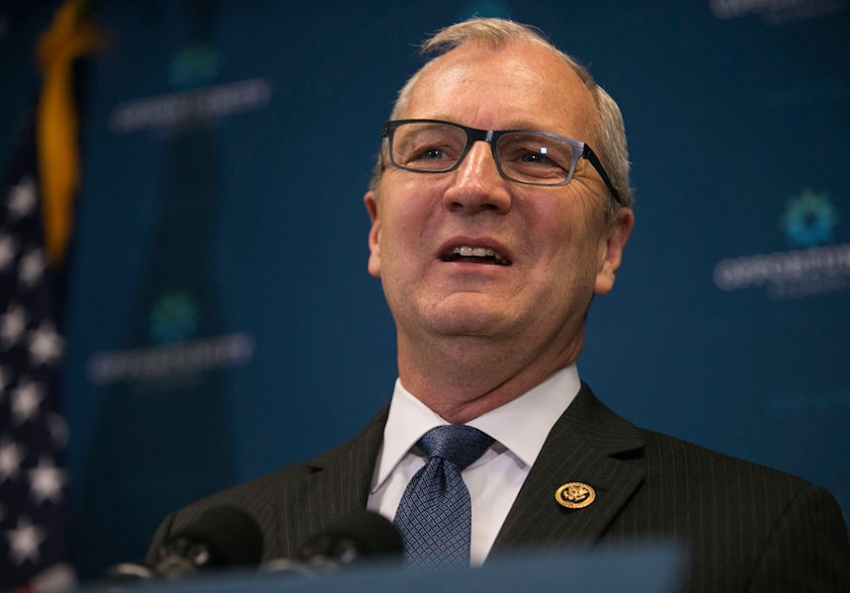 And other takeaways from yesterday’s debate between Clinton and Trump’s energy advisers.

Donald Trump probably hasn’t heard of the Dakota Access pipeline—at least according to Cramer. “I’m not sure he’s aware of it, frankly,” Cramer said when asked.

Yesterday afternoon, the 2016 presidential campaign saw its first substantive debate on questions of climate and energy policy. The candidates themselves were nowhere to be found, but their surrogates—energy advisers Trevor Houser and Congressman Kevin Cramer (R-N.D.) of the Clinton and Trump campaigns, respectively—were pitted head-to-head in the University of Richmond law school’s Moot Courtroom. In the audience were conscientious law students and (optimistically) dozens of people following along via a sub-C-SPAN-quality livestream. The YouTube video of the debate has fewer than 400 views as of publishing time, including In These Times’ fact-checker.

The questions posed by moderator Noah Sachs were remarkably detailed, compared with those asked of Clinton and Trump in each of their three televised face-offs. By both Houser and Cramer’s own admission, yesterday’s debate packed more policy substance into eighty minutes than any showdown between Trump and Clinton, going into levels of detail neither candidate could. That no one will see it is a sad sign of where mainstream media outlets’ priorities lie.

Like other debates, yesterday afternoon’s showdown delivered the Trump campaign’s trademark laxity toward facts. Here are some takeaways:

Donald Trump’s energy adviser does not know how electricity works. In response to an audience inquiry about promoting renewable electricity sources, Cramer punted the first response to Houser, saying of the question, “this is a good nerdy one.” When his turn came, Cramer said, “Great question. … It is complicated when you talk about the movement of electricity. You know, neurons go where neurons want to go once they’re on the line, right?” Contra Cramer, neurons are nerve cells in animal nervous systems (including humans’) engaged in electrochemical processes that allow us to think and feel and follow through on basic cognitive functions. Unlike electrons, they are not generally found flowing through the electric grid. Cramer serves on the House Committee on Energy and Commerce, is a former member of the House Committee on Science, Space and Technology, and was previously North Dakota’s Public Service Commissioner, a role that involved overseeing the state’s electric utilities.

Donald Trump probably hasn’t heard of the Dakota Access pipeline. At least according to Cramer, who also happens to the sole House representative from North Dakota, site of the pipeline controversy. “I’m not sure he’s aware of it, frankly,” Cramer said when asked. “I haven’t talked to him about it.” Somehow, the topic has never come up. For reference, the Dakota Access pipeline is the massive fossil fuel infrastructure project at the center of some of the biggest environmental protests since the Keystone XL pipeline’s defeat last year, and reportedly the single largest gathering of Native Americans in over a century. News about the demonstrations surrounding it have been in several major newspapers, and Trump himself has close financial ties to the companies building the pipeline. (Houser also declined to comment, as Clinton herself has not issued an official statement on the pipeline.)

Donald Trump’s energy adviser thinks the Paris Climate Agreement is “another bad trade deal.” He also seemed not to understand that a total of 85 nations and counting have already ratified the Paris Agreement, nations that in sum account for over 60% of worldwide emissions. “If [reducing emissions] is such a great idea,” Cramer asked, “why is everyone else depending on us to do it?”

Donald Trump’s energy adviser believes climate change is an exaggerated threat because glaciers. When Sachs referenced in one question that the ten hottest years on record have all occurred since 1998, Cramer opined: “I come from North Dakota—Fargo, North Dakota—and the area I grew up in is … a glacial lake bed that was created millions of years ago by glaciers. I think we’d have to be a bit proud to think that somehow these last hot years are the fault of man, and not some larger, regular cycle of climate.”

He then pivoted abruptly to talking about how many tax dollars Clinton’s climate plan would cost, then loosed a disjointed critique of the Paris Agreement that included a reminder that “China is a communist country.” While he didn’t echo his boss’s suggestion that climate change is a hoax invented by the Chinese, when asked again by an audience member later on in the discussion if he believed in man-made climate change, he said the threat was “grossly exaggerated.”

Like Trump and other Republicans, Cramer plucked talking points straight from the fossil fuel industry’s lobbying arm, which isn’t entirely surprising given that the oil and gas industry is his biggest donor source, followed by electric utilities. His assertion that the Obama administration’s carbon regulations are “picking the winners and picking the losers” in the energy economy, for instance, could have been lifted almost verbatim from a similar claim made in January by American Petroleum Institute head Jack Gerard during his “State of American Energy” address.

Cramer wasn’t the only imperfect debater; like Clinton’s own climate plan, Houser’s answers also left plenty to be desired. But—also like his boss—Houser was able to rattle off facts and figures and plans, many of them promising, while the Trump campaign merely rambled.

The choice in November on energy and climate policy, then, mirrors the choice on most policies: Between a technocrat being pushed into progressivism, and a stream of dangerous nonsense. Debates like yesterday’s may be one of the few chances before election day to see how vast that difference really is.