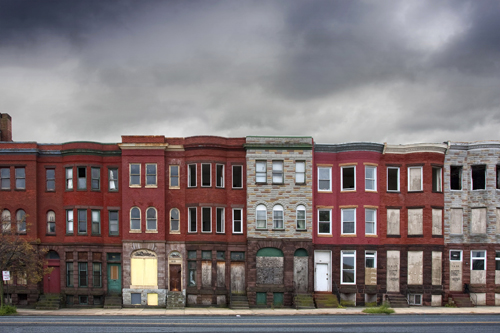 Affordable Housing is Vanishing. These Ballot Initiatives Could Help Stem the Crisis.

This November, voters in cities including Baltimore, San Francisco and LA will decide on measures that could fund more affordable units and improve services for the homeless.

Affordable housing may not have received much attention in the presidential election, but it’s on the minds of many voters. A national survey released by Ipsos Public Affairs in July found that six in 10 Americans say it’s a key issue for them, and nearly sixty percent of respondents say their local officials are not doing enough to improve housing affordability.

Faced with rising housing costs, at least twelve cities will be voting on affordable housing ballot initiatives come Election Day – with most of them revolving around constructing more affordable units and providing more support for the homeless.

In addition to pushing for bond and loan referendums that would create new financing for these ends in pricey areas like San Francisco and Oakland, community activists are confronting a deepening housing crisis in Baltimore, a city that’s often overlooked in discussions of affordability. Baltimore residents will have the opportunity to vote on a ballot initiative that would amend the city’s charter to create an affordable housing trust fund – an entity to provide housing assistance for families making 50 percent or less than the area median income. The fund could also support a variety of other affordable housing efforts, such as providing homeownership workshops and credit counseling, developing new low-income housing or rehabilitating vacants.

Many Americans think of places like New York, Washington D.C., and San Francisco as the most unaffordable places to live, but though they have higher rents, they also also higher median incomes. Johns Hopkins graduate student Philip Garboden analyzed the most recent American Community Survey and American Housing Survey data and found that of the top 25 largest cities in the country, Baltimore ranks fifth for rental housing burdens, behind only Detroit, Los Angeles, Philadelphia, and Memphis. (Los Angeles residents will be voting on two housing initiatives this November – one that would raise property taxes to fund housing for the chronically homeless, and another that would require large housing developments to set aside a portion of units for low-income residents.) Despite Baltimore rents ranking as average among the 25 largest cities, only six cities have lower median incomes, and all of those six cities have lower median rents.

For the 34 percent of Baltimore renters who live below the poverty line, the challenge of finding affordable units on the private market has grown increasingly difficult—not to mention that the majority of poor renters in Baltimore receive no housing subsidies from the government. The city has also seen sharp rent increases in recent years, so middle class families with stagnant incomes have also experienced unprecedented housing burdens. In the past six years, the number of cost-burdened middle-income renter householders in the city shot up from 1,800 to more than 7,500.

Affordable housing trust funds are not a new idea, but they’ve attracted more attention as of late. “They have definitely been picking up at a greater clip,” says Mary Brooks, the senior advisor of the Center for Community Change’s Housing Trust Fund Project. “When I started working on these in the late 1980s there was only a handful, and now there are 770 existing in cities, counties, and states across the country.” They’re no panacea – plenty of costly cities, including San Francisco, Chicago, and Boston have them – and a housing trust fund’s effectiveness depends largely on how committed the local jurisdiction is to funding it. But they can be powerful tools: in Washington D.C., their formidable trust fund receives annual allocations of $100 million.

Brooks says that housing trust funds tend to be politically popular because their dollars are extremely flexible – there are fewer strings attached to how money can be directed, so funds can be used at different times for different things. “A community could say, ‘Okay, we want to improve existing properties’ – and they do that for a few years,” says Brooks. “And then they could say, ‘Okay, now let’s start producing new housing.”

Housing for All Baltimore, a coalition of local groups, including the ACLU of Maryland, the Community Development Network of Maryland, CASA de Maryland, Enterprise Community Partners, and United Workers campaigned for the referendum. Volunteers needed to collect 10,000 signatures to get the initiative on the ballot, and ultimately gathered more than 18,500 over the summer months. The Baltimore Board of Elections then certified 12,057 of those signatures.

United Workers, a Baltimore-based human rights organization, did a lot of the organizing legwork to collect petition signatures. Members stationed themselves all over the city—from grocery stores, to churches, to community festivals. “I was surprised by the diversity of interest in this issue,” says Todd Cherkis, an organizer with the group. “There really just hasn’t been robust public policy around affordable housing and community-driven development in this city, and we found that that there really was widespread support.”

Last January United Workers unveiled their “20/20 Vision” campaign – a call for $20 million annually invested in public bonds for community land trusts, and $20 million annually invested in public bonds to hire the unemployed to deconstruct Baltimore’s notorious vacant housing. “The 20/20 campaign is a set of demands and goals that attempt to rewire the city to actually meet people’s housing demands, create jobs and do sustainable development,” says Cherkis. “The housing trust fund would be a vehicle to help raise resources directly to do some of this. It’s only a first step.”

If the measure passes, steep challenges will remain. Chief among them, the ballot initiative does not come with any source of funding because the state constitution prohibits appropriations by referendum. Instead, the referendum would empower the City Council to direct funds into the trust fund. At present, only the mayor has that authority. “That’s why we needed the referendum,” explains Odette Ramos, the executive director of the Community Development Network of Maryland. “We thought if we tried to do it through the legislative process, the mayor would veto it.” When asked how much she anticipates going into the trust fund, Ramos says she’s “hopeful” that that they can raise between $15 – 25 million. The fund would be open to public financing, including from state and federal sources, as well as private financing, like individual donors and philanthropic organizations. Advocates say they’re exploring different dedicated revenue sources, like a tax on AirBnB rentals. There are also discussions around pressuring local universities to pay directly into the housing trust fund, as they are currently exempt from paying property taxes. “We’ll throw everything on the wall and see what sticks,” Ramos says.

Not everyone is enthusiastic about the initiative. Carol Ott, a local housing advocate, says she’s voting against the trust fund this November. “This is what Baltimore does,” she tweeted. “Invests in strawman ‘game changers’ that change little to nothing for those who need it the most.” Ott calls for creating a program that allows middle-income affordable rental housing to coexist with homeowner-occupied homes, as well as diverting more resources from subsidized downtown developments to neglected, poor neighborhoods (something United Workers also supports).

While the goal of raising $25 million for a Baltimore housing trust fund seems relatively paltry compared to the likes of Washington D.C., Mary Brooks says not to underestimate what even a modest housing trust fund could accomplish in Baltimore, and notes that funds in other cities – like Nashville and Richmond – have increased their revenues over time. If the ballot measure passes, supporters say they don’t expect to see money come out of the trust fund until at least 2018. Advocates will also have a brand new city council and mayor to work with following November’s election. According to The Baltimore Sun, about half of current councilmembers are retiring, seeking other office, or lost their April mayoral primaries.