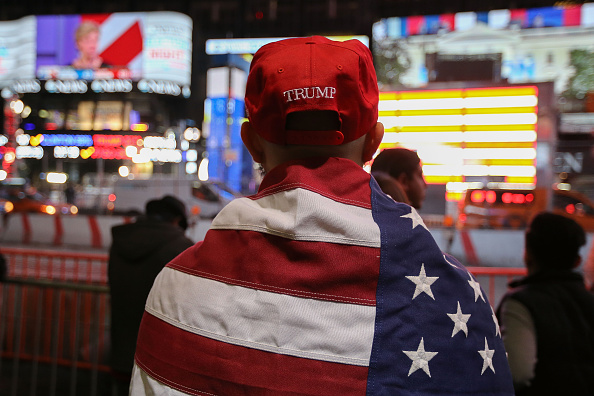 Before November, progressives’ task was to show that Trump has no place in American politics. Now, we have to grapple with the fact that he does. (Photo by Michael Reaves/Getty Images)

After Trump’s Win, Our Job Is More Clear Than Ever: Organize.

People have mobilized to defeat authoritarians in Trump’s mold before. Now it’s up to us to fight like hell, together.

"This is not a presidency for which we have scripts. For that, we need to look abroad."

Against every odd and without a fraction of Hillary Clinton’s ground operation, Donald Trump was just elected president of the United States. His campaign was built on a foundation of hate, with Trump grafting himself on to a decades-running drive by the GOP to secure the interests of wealthy white men—at the expense of everyone else. Last night, Republicans scored what might be their biggest win yet.

The question now is whether to accept Trump as our president. To be sure, this is a different situation than a simple conservative White House, like those of previous GOP administrations. On top of being a bigot—which many Republicans are too, in quieter ways—Trump is an authoritarian without much regard for things like civil liberties and basic rights, who talks openly about imprisoning political opponents. His election means that life for those people who were not eligible to vote before the 14th Amendment will become more unpleasant by leaps and bounds, first through post-Brexit style vigilantism and then through policy. The drive to legitimize him—as anything other than a snarling sociopath—will only continue as he prepares to take the oath of office.

This is not a presidency for which we have scripts. For that, we need to look abroad: To Silvio Berlusconi and a campaign fueled (like Trump’s) by sexism. We should also consider the Balkans and campaigns of ethnic antagonism that led to the decimation of minority populations there. Europe’s rising far right—in Germany, France, the UK and elsewhere—will welcome him with open arms. To be clear: We do not have a precedent in the United States to help us understand a Trump regime, and looking to brutal and authoritarian ones abroad may be our best hope.

People, coming together, have defeated dictators in Trump’s mold: Strongmen who thought the country was their playground and the people were theirs to imprison. Looking to January, do we treat him as a president-elect or as a tyrant? And do we start picking up the tools organizers in other countries have used to bring down authoritarians? Is he our president?

Before November, progressives’ task was to show that Trump has no place in American politics. Now, we have to grapple with the fact that he does.

Both liberalism and the left have failed to mount a tangible response to the deep pain wrought by a neoliberal status quo. As many look to blame the electorate, it’s worth remembering a few lessons from Brexit: Not all of the people who voted for it (or him) are hardened sexists and racists (though many are); a protest vote is not necessarily a vote for evil and many of the people paid to write about politics are deeply out of touch with most of the country.

Worth remembering, too, is that the left is stronger than it has been. More than 12 million people voted for an avowed socialist, Bernie Sanders, who—ironically—will probably be blamed in the coming days for Trump’s victory. Once fringe policies like a $15-an-hour minimum wage, ending mass incarceration and raising taxes on the wealthy are now popular ideas. These and still more transformative proposals could form the backbone of a firmly left vision for a fairer country and economy that includes the people Trump hates and the ones who voted for him as a way to register discontent.

But the results themselves are also a moment of reckoning for white America, which voted overwhelmingly for Trump. Not all of Trump’s support can be chalked up to economic anxiety. Any path forward for the left needs to be led principally by people of color and place abolishing white supremacy at its core. Liberalism and Third Way Democrats have imploded. Despite Trump’s election, the choice still remains: Socialism or barbarism?

Either way, it’s going to mean a fight.