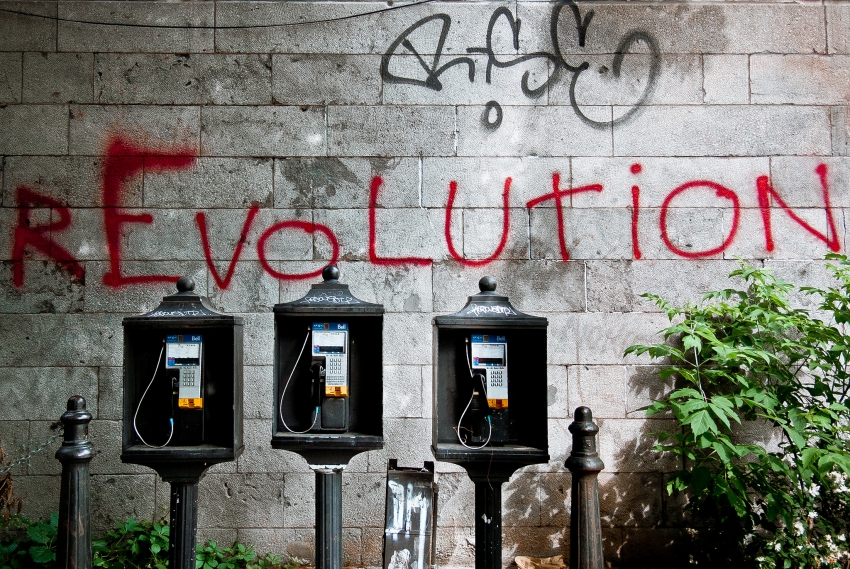 The Left must organize and persevere to 'Trump' oppression over the next four years. "rEvolution!" in Rue Prince Arthur, Montreal, by Albert on Flikr (CC BY-NC-ND 2.0)

Trump’s Victory Is a Wake-Up Call to the Left

Did we do enough in 2016? And how can we build a broader electoral movement?

But we cannot afford a repeat of what happened during this electoral cycle, which was to show up late to the game and then not take the other team seriously.

There is simply no other way to put it: The election of Donald Trump was a disaster for the Left and for all those struggling against exploitation and oppression in the United States. We face an energized white nationalist movement, a right-wing-controlled legislature and executive branch, and soon, a Supreme Court hostile to labor and progressive causes.

One of the things we desperately need at this moment is hope. Real hope. As in, “we're going to freaking win” hope. And there is a lot of fodder for hope, despite what we will be up against in the next four years. Millions of people, including many who have never attended a protest, are asking what they can do to change our country's politics. Students are walking out of high schools and colleges. Individuals everywhere are pledging to support those who will be the direct targets of the new administration's repression.

For me, part of getting to real hope is having clarity about what happened—having the courage to be self-critical and grow. And I think this starts with a basic acknowledgement: The Left failed the test of this election.

To be clear, I don’t believe the Left bears the brunt of the blame for Hillary Clinton's defeat, and I reject arguments that try to score political points through guilt-tripping. Both long-term and short-term factors worked against a Clinton victory. The Democratic Party alienated large sections of the working class over the past two decades and then threw its weight behind a deeply flawed candidate with a dubious record on economic and racial justice. Clinton also confronted enormous amounts of sexism throughout the election. The FBI pushed a politically motivated leak in the final week. The list goes on.

Still, the election confronted the Left with a few key questions:

Many on the Left did not feel that Trump's candidacy posed a large enough threat to advocate for someone they saw as the genuine candidate of the ruling class—Hillary Clinton. They took this attitude for various reasons: Trump had little to no chance of winning; Trump would not be able to move a radically racist and right-wing program upon assuming presidency; a Trump administration would spark greater social movement activity than a Clinton administration; Clinton was arguably a greater danger in terms of foreign policy; Clinton was arguably more neoliberal than Trump, etc.

Many preferred a Clinton victory over Trump but believed the Democratic party (or electoral politics more generally) is ultimately a dead-end for political organizers serious about radical change, and that serious engagement with Democratic candidate campaigns serves to drain movements of transformative potential. Therefore, because of their larger vision around electoral strategy, they felt unable to call on the Left to mobilize voters for Clinton.

So for one reason or another, many regarded the Clinton campaign with indifference or hostility. I disagreed and still disagree with this position, but this short note is not intended as a polemic against my third-party and anti-electoral comrades, most of whom are now in the streets alongside us. Instead, this note is meant for the leftists and progressives who, like me, believed Trump to be a historic danger, believed it important to both build social movements and be involved in electoral politics, were not opposed to engaging with a Democratic candidate in principle, and yet failed to play a significant role in this election.

I don't mean that this failure occurred on an individual level: People didn't do nothing. (Although I certainly criticize myself on those grounds: I called voters in Pennsylvania the weekend before the election on behalf of Clinton—the first time I ever stepped inside a Democratic Party campaign headquarters—but I could and should have done more.) And plenty of people did much more. Many of my friends spent 10- or 12-hour days turning out the vote for Clinton in battleground states, either through unions or the Working Families Party. Others organized their friends to fly to those swing states for electoral work, registering ex-offenders in Virginia and people of color in Florida. Others led the important multi-racial feminist fightback in the wake of the Trump-Billy Bush tapes.

So many of us did all that could be reasonably expected, and more. But: We did not add up to more than the sum of our parts. We didn't have a collective vehicle for the Left to play a role in this election. We didn't have a discussion about how to move resources in a way that accorded with our political assessments. We were unable to broadly legitimate voting for Hillary in swing states as a left position. Perhaps we were in one of the key left groups that were too internally divided to develop an independent, militant means of participation in this election. But we cannot afford a repeat of what happened during this electoral cycle, which was to show up late to the game and then not take the other team seriously.

We must, of course, unite with all to defeat Trumpism in the streets: protesting, blocking raids in neighborhoods and workplaces, building a movement for sanctuary cities or sanctuary schools, upping our support for the Movement for Black Lives and Standing Rock, etc. Our priorities are disrupting the Trump administration, grassroots resistance, organizing militant activists in unions and community organizations, even sheer survival. And if these efforts grow, other possibilities open up: Remember how in February of 2011 massive demonstrations against Wisconsin's Gov. Scott Walker's anti-labor legislation pushed state lawmakers to leave the state in order to deprive the legislature of quorum? And in the wake of the Pulse shooting, public sentiment drove federal legislators to organize a Congressional sit-in for (flawed) gun control legislation. We could see a repeat of this—where mass mobilization and outrage push lawmakers to find creative ways to gum up the gears of government.

But I believe that if the Left is going to be relevant in the fight against Trumpism in the electoral arena, then the fragmentation of leftists who are otherwise united broadly around an inside/outside strategy—social movements and electoral politics, inside and outside the Democratic party—will have to change. Through this past election, leftists who agreed on the overwhelming necessity of defeating Trump lacked a vehicle for coordinating our resources and efforts, amplifying our ideas and experiences, engaging progressives and liberals, and building political unity through the process. This will be an even larger problem in the years ahead. Electoral politics will be one of the central foci of struggle, and in the next several years most of our people, our communities, will see defeating Trump in 2020 or flipping Congress in 2018 as the basic condition of any progressive change. I am not calling on folks to leave their left organizations to start a new one, but either we decide to be leaders in this struggle as a Left (rather than simply individuals or a scattering of grassroots organizations), or the Left remains marginal for another turn of the historical wheel.

In 1980 Ronald Reagan began his campaign at the Neshoba County Fair close to Philadelphia, Mississippi. That's the city where three civil rights workers had been murdered in 1964 during Freedom Summer. His speech pledged his commitment to states' rights, a barely-coded sop to white supremacy. Four years after Reagan won that election, we saw a social democratic, multi-racial Rainbow Coalition grow out of a combination of militant fight-backs and local electoral victories. Chapters of the Rainbow supported local organizing while also coordinating nationally with other chapters to support Jesse Jackson's campaign to be the Democratic Party's nominee for president.

Today we have a number of inspiring movements (and encampments!) that will continue under the Trump administration. We have incredible multiracial alliances—from the National Domestic Workers' Alliance to Grassroots Global Justice—all across the United States. We have cutting-edge work in electoral politics through our mass organizations at the local level (like San Francisco Rising or the South Bay Labor Council) reaching into the state level (with New Virginia Majority and New Florida Majority). There's a lot going for us, but whether we are able to build a worthy successor to the Rainbow, which replicates its achievements while avoiding its quite obvious failures, depends on us moving beyond what we've been doing.

But: Our folks are brilliant. Our folks are wickedly talented. We have the capacity to reflect, be self-critical, and grow. And we're going to freaking win.

In unity and struggle,

Special thanks to Kayan Cheung-Miaw, Lucia Lin, David Monkawa, Dan DiMaggio, and Joe Schwartz for feedback on this article.

Lynn Koh is a student and labor activist in the San Francisco Bay Area.