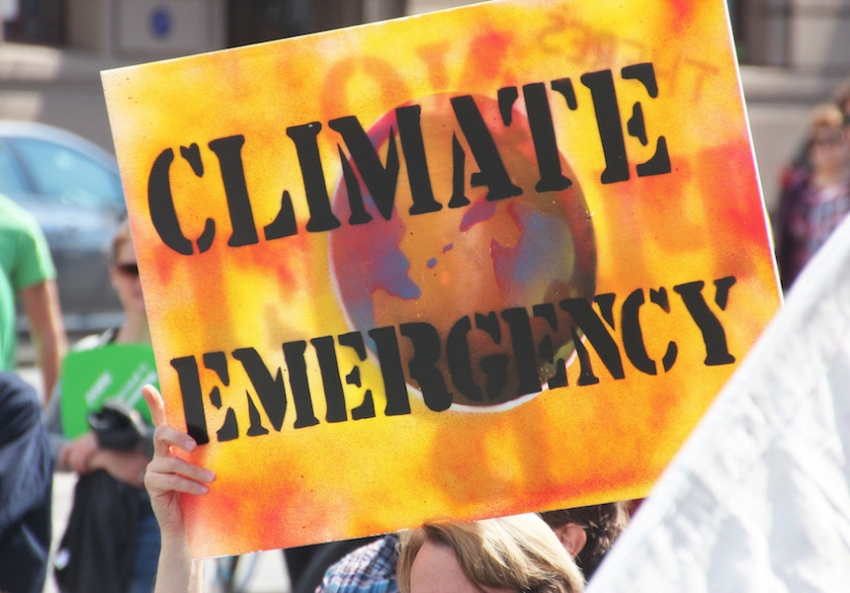 The election of Donald Trump constitutes an emergency for progressives. (Takver / Flickr)

There’s no compromising with the far right—but progress can still be made around the world, and at the local and state levels.

There are some very obvious reasons for those who care about climate change to rebel against a Trump presidency: Foremost, his campaign promises. On the trail, Trump pledged to let the Keystone XL pipeline move forward, emaciate the EPA and open the floodgates for all manner of coal, oil and natural gas drilling and exploration. For each new federal regulation, he would eliminate two. He would also cancel every “unconstitutional” executive agreement issued under the Obama Administration, including the Clean Power Plan.

Trump’s pick to head the EPA’s transition is none other than famed climate skeptic Myron Ebell, who has complained that he would like more funding in the role to “combat the nonsense put out by the environmental movement.”

Then there are the less obvious reasons, the ones that don’t fit neatly into the world of climate policy. Rising temperatures could drive as many as 1 billion “climate refugees” from their homes by 2050, and the United States is already beginning to resettle its own from Isle de Jean Charles, La. Globally, an estimated 22.5 million people were displaced by climate impacts between 2008 and 2015, though whether they can claim the legal status of a refugee remains up for debate. Millions have been displaced by the war in Syria, known to have been exacerbated by extreme drought.

So what does this have to do with Trump? During the campaign he promised to round up and deport some 11 million undocumented immigrants, and recently affirmed that pledge with one to deport 3 million people in the days after taking office. Since election day, his staff have begun drafting plans to force immigrants from predominantly Muslim countries to register with the federal government. A growing far right in Europe looks to solidify these kinds of policies abroad, as Conservative British Prime Minister Theresa May has already done, and France’s Marine Le Pen could do if elected to the French presidency next spring.

Climate chaos, then, isn’t marked simply by melting glaciers and parched deserts, but by the harsh and already existing realities it stands to exacerbate. And it’s already begun: Look at Hurricane Matthew, a storm aggravated by rising temperatures, which killed one thousand people in Haiti, and 46 in the United States.

Through the threats climate poses to things like food security and water supplies, an estimated 400,000 people worldwide already die from climate change each year. The same study—commissioned by 20 governments in 2012—found that including other health hazards from fossil fuels, such as air pollution and dangerous workplaces, bumps that number up to nearly 5 million people per year. And while climate impacts disproportionately hurt the Global South, the report warns that rising levels of carbon in the atmosphere already pose a “high” risk to all of North America—especially those communities that are already vulnerable to other kinds of state-sanctioned violence.

That many still consider climate change a far-off threat represents the systematic inability of the media and the environmental movement itself to convey or even to recognize the humanity and suffering of people of color, in particular. To treat climate change as anything other than a clear and present danger is to deny that black life matters, and millions of others alongside them.

To pledge to work with Trump—as Al Gore has—is to do the same and still worse. The League of Conservation Voters appears to be basing its strategy around convincing Trump; Thomas Friedman, in his New York Times column last week, wrote, “I’m not going to spend every day hoping you fail,” pleading with the president-elect to “help heal the planet’s climate change problem.”

If we take Trump at his word, though, climate organizers should both hope and hasten his failure—from his infrastructure privatization schemes to his Muslim registry to his blank check to the oil and gas industry to his border wall. That some greens would be so willing to work with Trump begs the question: What would make them unwilling to collaborate with him?

Old habits die hard, but Trump’s election should prompt a reckoning for green groups and politicians who have eschewed a genuinely progressive politics in favor of attempts at fruitless compromise: Either stand against Trump or stand against the communities he is determined to rip apart. As the Climate Justice Alliance wrote recently on their website, “Negotiating with climate deniers and placating right-wing populists like some have begun to do is a dead-end that undermines the progress our movements have made and could make.”

So amidst this doom and gloom, what might a way forward look like? At home, we must ensure none of Trump’s regressive policies go through—this means we must blocking him every step of the way. No deportations, no pipelines and no devastating cuts to either the EPA or the welfare services on which millions depend. At the state and city levels, it may still be possible to go on offense with renewable energy installation, fracking bans and other measures.

But much of the action is now international. As organizers Nicholas Hearinger and Tadzio Müller argued recently, this month's election means that other nations will have to ramp up their own commitments—and that movements will need to hold them to a total freeze on fossil fuel development.

In addition, with Trump at the helm, the U.S. should be treated as the pariah state it now is. The international community, which met recently in Marrakech, Morocco, could—as Naomi Klein recently suggested—impose sanctions if and when we fail to comply with preexisting agreements.

In part, Peters went to Marrakech to launch this year’s global carbon budget, which lays out how much carbon each country has spit into the atmosphere through 2016. This year’s numbers show that China (which accounts for about 30 percent of emissions worldwide) has plateaued its emissions over the last three years after a spike through the 2000s—a bit of good news in dark days.

Asked about the role of civil society and social movements in the coming years, Peters says they’ll need to “keep the bastards honest,” and pressure world governments to pick up the considerable slack left by the United States.

As another place where social movements can play a big role, he adds that tackling climate change will most likely involve redefining what progress and economic development look like:  “GDP is a rather arcane way to measure progress, but everyone lives and dies by it.”

“What happened has happened,” Peters reasons. “We have to find pathways that deal with it. I think there’s been too many people saying it’s game over. You’ve got to keep fighting to survive. It’s game on.”

Any hope of curbing catastrophic warming in the long term now depends on unseating Trump and the GOP’s dominance at the national level, and putting comprehensive federal policy back on the table in 2018. With the Democrats’ centrist Third Way-ism defeated, the path toward a low-carbon future is through an ambitiously progressive popular front, hell-bent on wrestling state power away from the right. Building that front—and ensuring the planet has a role in it—should be at the top of every environmentalist’s agenda. Working with Trump, on the other hand, should have no place on it.