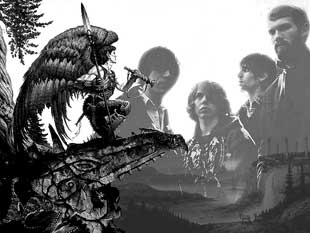 Return of the Elves

Magic—or more precisely, the “magical”—was one of the first casualties of punk rock. As guitar solos contracted and song structures were shaved to a stump, with amazing speed we lost our dragons, our druids, our talking trees—the whole seeping, twittering realm of the fantastic was suddenly banished, as if by a lobotomy. It survived, lurkingly, in the lower realms of heavy metal and Goth, but no one would ever again fill a stadium by singing about Gollum, the evil one. Punk rock had killed the elves.

Or had it? Dead Meadow, a quartet from Washington, D.C., whose fourth studio album Feathers was released by Matador on Feb. 22, are on a mission back into the magical. Schooled in D.C.’s punk and post-punk scenes, singer-guitarist Jason Simon and bassist Steve Kille discovered, almost as soon as they began playing together, a shared attraction to a state of pre-punk awe. “We found ourselves trying to get back to the music that had blown our minds as kids,” says Kille. “Pink Floyd, Led Zeppelin, the records your older brother played you.” A steady stream of literary intoxicants—J.R.R. Tolkien, H.P. Lovecraft—flowed into the music, and the sound of Dead Meadow was born: spacious, weighty, enthralling, an almost ritualized reenactment of the moment at which ’60s airy-fairyness nosedived into ’70s drug rock.

“From the heights of the town/ her handmaids will announce/ her undying presence within/ the seven-pillared house,” run the lyrics to “At Her Open Door.” “We’re definitely looking for that escapist feel,” says Kille. “You know, you’re 10 years old, sitting on a shag rug, dreaming about other worlds.” The creation of other worlds demands a grand sense of scale, of the highs and the lows. On Feathers, vintage psychedelia is earthed in a rugged blues-metal base, and titanic riffing suddenly softens to the opiated trudge of Dark Side of the Moon-era Pink Floyd.

In a happy irony, it was the DIY climate of D.C.’s famously intense punk scene that empowered these musicians to take the plunge, to telescope backward into the music of their dreams. “I think it’s just the nature of growing up in that area,” says Kille. “You feel like you can do it, follow your own vision.”

Not easily pigeonholed, Dead Meadow’s music has been called everything from stoner rock to psychedelic revivalism. “The labels don’t make much sense to me,” says Kille. “Are we a heavy band? Are we a melodic band? I think we’re a pop band that plays heavier songs, which is maybe how Black Sabbath would have described themselves, before the whole idea of ‘heavy’ got so rigid and prefabricated.”

Dead Meadow’s capacity for unforced heaviness is indeed remarkable. There is no oppression in their volume. Their heaviest moments have a quality of subsidence, of something gentle yet enormous sleepily changing position. Nothing breaks the reverie. “You read an Edgar Allan Poe story,” says singer-guitarist Simon, “and it’s all about keeping a mood, maintaining a certain mood and holding it through every word and phrase. And in music, if you’re trying to match every note to a certain feeling it becomes almost like a raga. How can we hold this feeling through a whole song?”

Simon’s frail, drifting voice—like a less virtuosic Thom Yorke (of Radiohead)—is the emotional key to Dead Meadow, undercutting the epic strokes of his guitar with a sort of wonderstruck humanness. Simon is almost addicted to wonder—his list of favorite fantasy writers goes way beyond H.P. Lovecraft, into the less charted territory of Algernon Blackwood, William Hope Hodgson and the Londoner Arthur Machen, whose 1914 story, “The Bowmen,” was directly responsible for the World War I legend of the Angels Of Mons, in which archers from the age of Agincourt appeared over the battlefield and rained celestial arrows on the German army.

“These writers, to me, are just a celebration of pure imagination,” Simon says. “And it seems like the imagination is suffering these days—so many images coming at you, so shallow and so fast. We’re trying to create songs with some space in them, some imaginative space, to give people some room.”