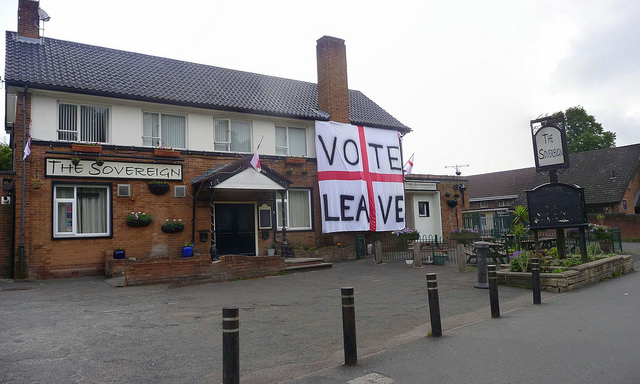 For months, organizers in Britain have been grappling with questions their U.S. counterparts are now facing. (Ian/ Flickr)

“Hope Not Hate”: A Roadmap for Navigating the Racist Backlash Against Neoliberalism

"How can movements honor feelings of voicelessness and economic pain while excising white supremacy? What does taking back power look like?"

There have been more than 1,000 reported incidences of hate speech and intimidation since the election, from Swastikas drawn on cars and community centers to physical assaults, according to the Southern Poverty Law Center. In California, a woman with lupus—who wears a head scarf to protect her from the sun—had her car windows smashed and her purse stolen. The assailants left a note referencing her “hijab.”

The number of new attacks spiked right after the election. But as the post-November wave of backlash has started to taper off some, more white nationalists have found a home in the President-elect’s cabinet. Stephen Bannon, former head of the far-right website Breitbart News, was named Trump’s chief strategist. Jefferson Beuregard Sessions III—who called the Voting Rights Act of 1965 a “piece of intrusive legislation” and was fond of the Ku Klux Klan before finding out some members smoked pot—is set to be confirmed as U.S. Attorney General.

For residents of the UK, this script might sound familiar: an electoral coup from the right followed by a rash of violence against immigrants and people of color, and then by the institutionalization of hardline views into the highest levels of government. Hate crimes shot up in Brexit’s wake this summer, and a right-wing attack claimed the life of Labour MP Jo Cox, an outspoken supporter of migrant rights whose killer shouted “Britain First” (a white nationalist mantra) as he ambushed her. Now, Theresa May’s conservative government has put forth its own UK Independence Party (UKIP)-esque immigration proposals, promising to prosecute those who offer housing and banking services to undocumented immigrants.

For months, organizers in Britain have been grappling with questions their U.S. counterparts are now facing. What does defending those communities most vulnerable to xenophobic attacks entail, and what does bringing those same communities into the ground-floor of a multi-racial movement-building strategy look like? Why are progressive organizations—most housed in major cities—so out of touch with voters who feel the economy has left them behind? And how can movements honor feelings of voicelessness and economic pain while excising white supremacy? What does taking back power look like?

“People are looking for an alternative”

Started in 2004 with the aim of taking on the far-right British National Party (BNP), Hope Not Hate has in recent years embraced a community organizing approach to anti-fascism to start to answer some of those questions, with an even more dire sense of urgency since Brexit. As organizers in the United States navigate their next four years in Trump’s America, its example might point a way forward.

“We judge our success on the basis of whether or not we have brought a community together when the far-right are seeking to divide it, rather than whether we have physically confronted the far-right,” says Hope Not Hate organizer John Page.

One Hope Not Hate effort—part of what Page calls a “jigsaw of interventions”—is aimed at organizing and building a sense of solidarity in towns throughout “Leave” Britain, particularly those hard-hit by deindustrialization and too-often forgotten by the UK's left and progressive circles.

“There’s a degree to which the neoliberal project is running out of steam,” Page reasons, reflecting on voters’ thirst for anti-establishment politics. “People are looking for an alternative. The right wing is happy to use racism to build an electoral base to progress their brand of politics.”

While “Leave” voters in these areas sided with UKIP in the summer’s vote, fringe far-right formations like the BNP and white nationalist English Defense League have never gained much ground—a fact Page credits to the towns’ union past and a lingering sense of working class solidarity.

For this and other reasons, he cautioned against writing off “Leave” voters—even those hostile to immigrants.

“Those people who voted for Brexit on the bases of their anti-immigration stances are not hardline racists,” Page told In These Times. “They’ve simply accepted what’s widely accepted as common sense: that there are too many immigrants, which is the message that has been pumped out by newspapers for the last 10 years.”

Part of that work, Page argues, is “accepting that those people are going to have racist views,” and not starting off conversations with questions of policy or identity. “We have to start being relevant to them before we can have a discussion about geopolitics. We’re not going to go in there and talk to them about immigration. We’re going to talk to them about poverty and job losses, and that they’re more likely to die,” Page said.

“We try to get people to work together”

A recent study found that the gap in life expectancies between rich and poor areas of Britain has grown starkly over the last 20 years—by 41 percent among men and a staggering 73 percent among women. Thirty percent of children in Britain live in poverty, which puts them at greater risk for a whole host of potentially deadly illnesses. Among infants, those from poor families are at 10 times the risk of sudden death than those from better-off homes.

As industry and unionization rates collapsed in towns across Britain, so too did social networks and local institutions, pubs and union halls alike. “People have become very atomized and isolated,” Page says. As a corrective, Hope Not Hate is working to rebuild lost points of connection, and help meet both social and economic needs by starting up community groups and darts teams.

“We try to get people to work together,” Page says, “setting up cooperatives, and working with schools to help young people coming to school to get a decent breakfast. We’re very keen to look at this issue of health.”

The effort is still in its early days, starting off with four pilot projects, including one in the former Welsh mining town of Merthyr Tydfil, ranked in 2007 as the United Kingdom’s fifth-worst place to live. In July, the town was one of more than one hundred around the country to host a community meeting around the theme of “More in Common,” followed in September by small festivals in honor of Jo Cox.

The events are intended to seed a decentralized network of Hope Not Hate chapters. One dispatch from a meeting in Sheffield, which voted narrowly leave the EU, reported that among the attendees were “[l]ocal counsellors, community development professionals, teachers, lecturers, small business owners, students and first timers like myself. All motivated to come and stand up to the upsurge in racism our recent Brexit vote had engendered.”

Hosts of a Manchester meeting reported that, “All but two attendees were new to Hope Not Hate, and most poised a determination that they could no longer sit by and watch our social problems grow.”

“This is a huge step for all of them”

On a related front, Hope Not Hate is also supporting multi-racial movement building work around Britain. Having not worked extensively with communities of color before, the group is now helping foment a national network of people of color-led organizing outfits. For the last several months, Hope Not Hate organizer Tatiana Garavito has been crisscrossing the island, building up a network of organizers of color—most of whom have never been activists. They held their first national gathering at the end of November, gathering various groups to map out strategies at the grassroots and policy levels.

When we spoke, Garavito was in Cardiff, the Welsh port city and capital that has suffered since the region’s coal industry all but collapsed. When she arrives in a new city, she sets up “at least 60” one-on-one conversations, after which, she says, “I realize the major issues that people have there, and organize meetings for them to get to know each other … and start creating a culture within the group to start working on whatever they have chosen to organize around.”

Without prompting, she told me, people relay stories of the abuse they’ve faced since Brexit, like being refused service in shops and getting assaulted for wearing a hijab. Yet while migrant communities and communities of color have borne the brunt of post-Brexit violence, “the organizations working with migrant issues … are led by very lovely white middle-class people, who just don’t experience the same things,” Garavito says. So in addition to training organizers at the local level, Hope Not Hate’s work with communities of color is explicitly interested in building leadership to take on roles at a national level, as well.

Campaigns look different in each city. In Bristol, for instance, a newly-formed group plastered the city with poems authored by writers of color, and the names of refugees who died en route to Europe through the Mediterranean. In Cardiff, organizers are targeting the banking giant Barclays, which has started to close the accounts of refugees and asylum seekers.

“The actions change based on what they want to do,” Garavito says, “and all of these people have never been involved in activism. This is a huge step for all of them.”

From activism to politics?

As in the United States, the question remains as to whether new-found excitement for taking on the far-right can be channeled into a successful electoral challenge. Having undergone a rightward shift under Tony Blair, the Labour Party saw its membership numbers creep downward starting in the mid-1990s.

“For a long time people felt that the Tories had nothing to offer to people in these post-industrial communities,” Page says. “With the rise of UKIP, that has been displaced … these are people who say, ‘the Labour Party no longer offers us anything.’”

Membership has spiked since Jeremy Corbyn’s successful campaign for Labour leadership in 2015. Still, Garvito and Page—while excited about Corbyn’s leadership and Labour’s leftward shift—both cautioned that even the party’s activist wing has had trouble connecting with communities of color and disenfranchised whites.

Democrats in the United States may now be facing their own Corbyn moment—complete with the challenge of building a winning and diverse coalition. Progressive leaders like Bernie Sanders and Keith Ellison—now in the running for DNC chair—seem poised for a takeover, albeit on a smaller scale. Still, part of the challenge of the next several years will be correcting for the serious blind spots around race that hobbled Sanders’s primary campaign, peeling Trump protest voters away from his base while creating a forward-facing vision for what an egalitarian and multi-racial democracy can look like in the United States.

Whatever the prospects for taking back Congress in 2018, one task in the short-term seems bracingly clear: defend the communities most vulnerable to a Trump regime and demonstrate a hopeful alternative to the right’s fear-mongering and division—town by town.