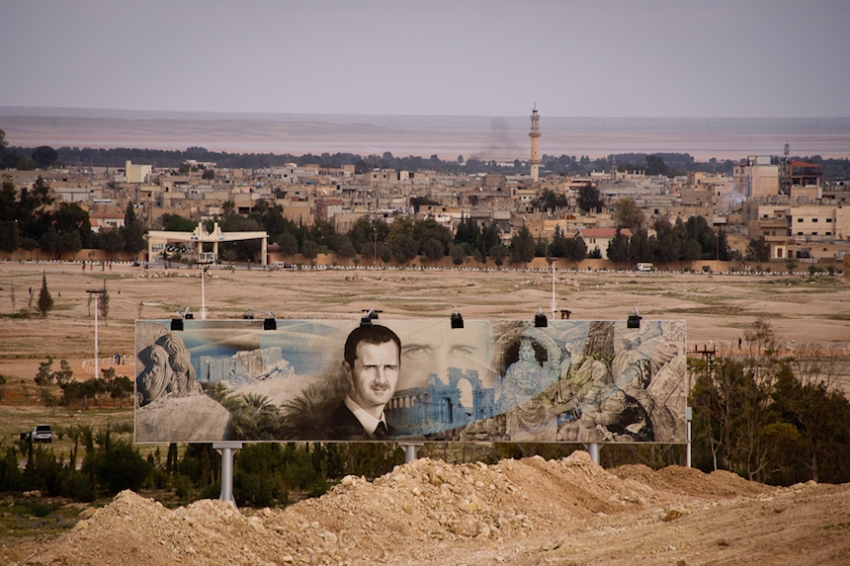 Billboards of Bashar al-Assad, whose regime has besieged and displaced millions, could be found throughout Syria prior to the Arab Spring Movement. (Wojtek Ogrodowczyk / Flickr)

How the Syrian Civil War is Creating a Nation of Exiles

Assad’s strategy of sieges, bombings and civilian evacuations means many will never see their homes again.

The regime is re-conquering territory through displacing a civilian population it can never hope to rule through consent.

The world watched, throughout November and December 2016, as conditions in the rebel-held area of Aleppo became unbearable. There, amid heavy snowfall, thousands of residents were forcibly displaced from their homes. Most were sent to rebel-held Idlib, where the regime is concentrating its opponents and may soon concentrate its military might. Some of those sent to regime-held west Aleppo were reportedly arrested, including Ahmad Mustafa, a journalist with Halab Today, and Abdulhadi Kamel, a volunteer with the Syria Civil Defense. Others were forcibly conscripted by the regime army.

Aleppo is only the latest opposition stronghold to follow a now-familiar pattern. Pro-Assadist ground troops, often Iranian-backed Shia militia from Lebanon, Iraq or Afghanistan, enforce a siege on the rebel-held area. No one is allowed to exit; those that try are detained or shot by snipers. Nothing is allowed to enter, including basic food items or medical supplies. Bashar al-Assad's regime grants few requests by humanitarian agencies to access besieged communities. The sieges, which amount to the deliberate starvation of the civilian population, are accompanied by a campaign of intense regime and Russian bombing. Internationally prohibited barrel bombs, chemical and incendiary weapons are dropped on residential areas. Agricultural lands, medical facilities and rescue workers are deliberately and systematically targeted. Weakened and exhausted, the besieged population is then forced to capitulate in a “local truce deal” often accompanied by the eviction of the whole, or part of, the population. And finally, the regime sends green buses to evacuate civilians, who may never see their homes again.

A recent report by Siege Watch estimates that as of October 2016 there were more than 1.3 million people trapped in at least 39 besieged communities across Syria. Of the 1.3 million, 91 percent are besieged by the Assad regime and its allies. The exceptions include Deir el-Zour, where the siege is primarily enforced by ISIS—although the regime is imposing additional restrictions internally, such as regulating humanitarian aid distribution and restricting freedom of movement for civilians. In Idlib, Islamist rebel groups have besieged the predominantly Shia towns of Foua and Kfraya, using civilians as a negotiations tool—these civilians were also evacuated from their homes in the December Aleppo deal. All those trapped in these open-air prisons are vulnerable to displacement. The regime’s “starve or surrender” policy can mutate at any time to “surrender or risk annihilation.” In October, Syrian and Russian planes dropped leaflets over eastern Aleppo reading: “If you do not leave this area immediately you will be finished. You know that everyone has given up on you. They left you alone to face your doom.”

Throughout its strategy of sieges and displacement, the regime is re-conquering territory through evacuating a civilian population it can never hope to rule through consent. On December 30 and January 6, following a reduction in hostilities, Syrians were once more on the streets in Aleppo, Idlib, Homs and Damascus, demonstrating their continuing opposition to Assad’s rule. And the regime cannot hold re-conquered territory alone. As the city’s residents left eastern Aleppo, Russian occupation forces moved through deserted streets. Fears now abound for those displaced, who have been forced into ever-decreasing opposition-held territory, or into camps of exile in the winter cold.

Around the capital, revolutionary strongholds have faced a similar fate to Aleppo's. Daraya, for example, a suburb of Damascus, fell to the regime in August 2016. This town, a model of non-violent civil resistance and democratic self-organization, was a living example of what a post-Assad Syria could look like. Following a 1,368-day siege, and bombardment with napalm and barrel bombs—roughly 9,000 of the latter, according to local activists—Daraya’s residents were forced to surrender. As part of the truce deal negotiated between rebel groups and the regime army, the entire remaining population was forcibly displaced. Assad’s soldiers chanted pro-regime slogans as Daraya’s residents boarded the buses under United Nations supervision. Fighters were sent to rebel-held Idlib and civilians to regime-held areas of Damascus province.

Soon after, in October, rebels and the regime negotiated a truce deal in Moadamiyeh to end the four-year siege and aerial bombardment there. Moadamiyeh was one of the towns in the Ghouta region hit in the August 2013 sarin attack, where hundreds were gassed to death. Fighters and their families, but not civilians, were transferred to Idlib, and regime security re-entered the town after its long absence. As the UN had received heavy criticism for assisting the forcible transfer of Daraya’s population, they refrained from assisting in subsequent evacuations. There is no independent monitoring of areas that have come back under regime control, and residents of Moadamiyeh have reported recent arrests and disappearances since the return of Assad’s tyranny.

In western Damascus, the town of Khan al-Shih (which contains the “Al Awda” camp for Palestinian refugees) has also seen recent evictions. Despite the efforts of Al Awda residents to remain neutral during the revolution and war, they were subjected to arrest campaigns and regular shelling. Over the summer, regime and Russian airstrikes intensified in renewed clashes with rebel groups in the Khan al-Shih area, and the camp’s schools and hospitals were targeted. All main access roads to the camp were sealed, trapping 12,000 residents (out of what was once 30,000) inside. Facing dwindling food supplies as well as power and water shortages, they reached a deal to ease conditions in the camp in return for the evacuation of fighters and their families—as well as many activists, journalists and other civilians, according to on-the-ground reports gathered by the Action Group for Palestinians of Syria. In November and December, residents boarded the green buses to Idlib. For those who had fled Palestine in 1948, this was a second Nakba.

In Al-Waer neighborhood, the last remaining revolutionary stronghold of the city of Homs, opposition fighters and the regime reached an agreement in August to evacuate rebels and their families to Idlib in return for an end to the siege and aerial bombardment and the release of—or update on the fate of—some 7,300 local detainees. Since then, over 600 rebel fighters and their families have left, yet only 194 detainees have been released, stalling further evacuations. Those who have left will join the 6.6 million Syrians who are no longer living in their own homes but have been internally displaced by the conflict, not counting the five million who have fled the country as refugees since 2011.

Those who leave may never return. Old Homs, once called the “capital of the revolution,” returned to regime control in 2014. Over two years later, official statistics say only 40 percent of the estimated 300,000 that fled the city have returned. Many will not return to regime-controlled areas for fear of reprisals, arrests or forced military conscription. Others no longer hold property documents or are afraid of going to state departments to validate them. Even to rent a property today can require security clearance from thirteen different departments. In some cases those who have returned find new families living in their homes. Others may find their home in ruins. According to Human Rights Watch, thousands of houses in opposition strongholds in Damascus and Hama have been demolished by the regime, using explosives and bulldozers, effectively erasing entire neighborhoods from the map.

Through these evacuations Assad is able to regain control over lost territory. The regime’s first priority is to empty rebel strongholds of the fighters who defend them, enabling it to concentrate its military resources elsewhere. Assad also knows he cannot win the loyalty of dissenting communities that have suffered so much at the hands of his regime, so civilians, too, are often evicted. Many are sent to rebel-held Idlib, where the huge influx is placing increasing pressure on opposition bodies to provide for the population despite limited resources. The dominance of extremist groups such as Jabhat Fatah al-Sham (previously known as Jabhat al-Nusra)—al-Qaeda’s former affiliate—in Idlib provides a ready excuse for regime assault in the name of its “War on Terror.”

There’s an ethnic dimension to Assad’s cleansing of opposition strongholds as well. Opposition communities are mainly comprised of Sunni Arabs, which make up the majority of Syria’s population, whilst most minority communities, particularly from the Alawite sect to which the president belongs, have stayed loyal to the regime. When Old Homs was “evacuated” in 2014, reports emerged of Alawite and Shia loyalists from nearby villages being moved into vacant Sunni homes. Foreign settlers have also moved into areas cleansed of locals. Around 300 Iraqi Shia families have reportedly relocated to Daraya and Moadamiyeh, reportedly provided with a house and financial incentives. Iran has been buying real estate around the capital and in Homs, including the homes of those who have been displaced, pricing locals out of the market. Even in the old city of Damascus, which never slipped regime control, Christian residents have complained about the presence of large numbers of Iranian, Iraqi and Lebanese Shia militia changing local demographics.

Through such demographic engineering the Syrian regime is attempting to ensure a loyal constituency in the areas it deems useful. Some observers have welcomed local truces as a prelude to peace. Yet the accompanying acts of forced population transfer and the implantation of settlers should be considered war crimes. The international community must place real diplomatic and economic pressure on the regime and its allies to end the bombing and lift the sieges, allowing freedom of movement for civilians and access for urgently needed humanitarian aid. This will not be possible without sustained pressure from a global public standing in solidarity with the oppressed Syrian people and calling on responsible parties to end their suffering. Any just peace must also include the right of return, so Syria’s millions of displaced people can safely return to their homes.

Leila Al Shami is a British-Syrian activist who has worked with the human rights movement in Syria and elsewhere in the region. She is co-author of Burning Country: Syrians in Revolution and War (2016).