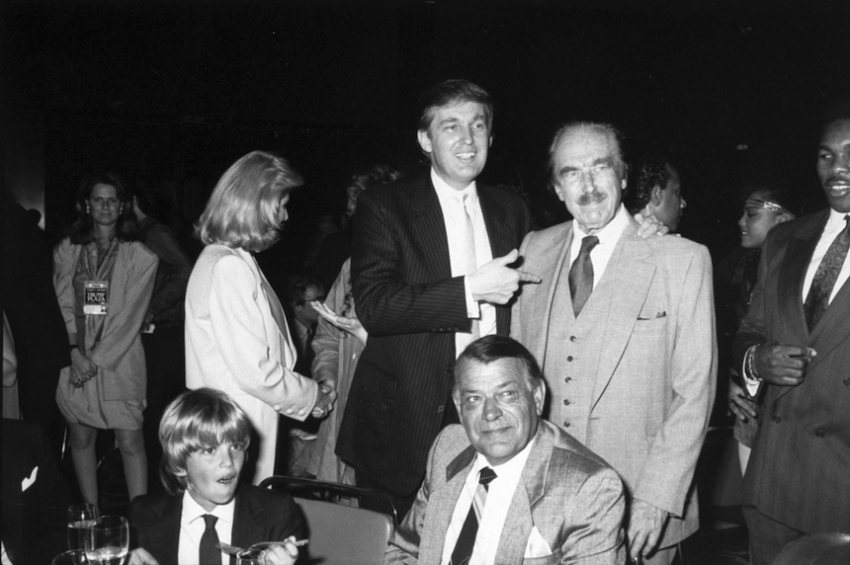 The man alleged that Fred Trump told him to “get rid” of the black residents in the complex by offering to pay their $500 down payment for cheap housing elsewhere.

This week the FBI released to the public nearly 400 pages of documents associated with the bureau’s 1970s investigation of racial discrimination in the Trump family’s real estate company, Trump Management, Incorporated. Donald Trump was at the time the president of the company, while his father Fred Trump was chairman.

While related documents had already been obtained and reported on by the Washington Post and other outlets via the Freedom of Information Act, this new release is significant because it provides the public immediate access to material from the investigation. The documents offer an unmediated view into Trump’s long record of racism, a personal history that sheds light on a watershed moment in civil rights history.

The federal lawsuit brought against Donald Trump and his father Fred Trump started the same way as so many other civil rights cases: with a test. In 1972, the Urban League decided to “test” the companies’ housing policies by sending both white and black volunteers seeking apartments. In case after case, they allege, black applicants were told there were no vacancies while white applicants were shown an apartment and given an application. Housing activists became so convinced of their case against Trump Management, Inc., that they alerted the Department of Justice (DOJ). The DOJ charged Trump and his company in violation of the 1968 Fair Housing Act—which forbade discrimination in housing on the basis of race—in October 1973.

The DOJ’s investigation into Trump would not have been possible without pressure from a powerful grassroots fair housing movement, which relentlessly advocated for integration, expanded tenant’s rights, and an end to exclusionary and exploitative practices like redlining, which barred communities of color from access to mortgage loans, and blockbusting, in which real estate agents would convince white homeowners in racially transitioning neighborhoods to sell their homes at low prices, and then re-sell them at inflated prices to black homebuyers.

When Martin Luther King arrived on the West side of Chicago in 1965, intending to make fair housing a focal point in the Northern civil rights movement, he partnered with a grassroots open housing movement already in full swing. By that year, the National Committee Against Discrimination (NCDH), a legislative-lobbying organization devoted to combating housing discrimination, counted 1,000 fair housing groups in the U.S., many of which were concentrated in the urban North. The strength of fair housing activism can be seen in the legislative success of fair housing laws. NCDH supporters and state and local housing groups successfully pressured “state after state and city after city to pass fair housing laws,” writes historian Thomas Sugrue in Sweet Land of Liberty: The Forgotten Struggle for Civil Rights in the North. By 1967, 24 states had passed laws against housing discrimination.

In New York City the fair housing movement was particularly strong. In 1958, a whole decade before the passage of national legislation, the city enacted its Fair Housing Act, which banned discrimination in residential housing. Along with the New York Urban League, in 1964 NCDH used federal funding from the War on Poverty to pilot a new program, Operation Open City. A 1967 Open City report stated that the project’s objectives were to combat “the housing discrimination which keeps non-white New Yorkers in racial ghettos.” Along with promoting integration through education programs, Open City provided assistance to minority families moving into majority white neighborhoods. In so doing, however, the Urban League uncovered widespread discrimination from landlords across the city. In 1967, the Organization began routinely sending “checkers” to apartments in majority white neighborhoods—including Trump’s properties.

The Trump files are illuminating in their ability to reveal what Sugrue describes as the “furtive tactics” real estate agents used after the Fair Housing Act to maintain segregation. The FBI documents reveal systemic discrimination against potential black renters—including allegations of fabricating rental leases, lying about the cost of rent and rejecting financially qualified black applicants.

Trump employees, according to the files, were instructed to write codes, including the letter “C” for “colored,” on the rental applications of blacks and Puerto Ricans. Trump’s coding system recalls the real estate codes used by the federal government’s Home Owners Loan Corporation during the New Deal. In “residential security maps” based on common practices in state and local ordinances as well as the real estate industry, the government color-coded areas with high populations of people of color as “red”—high-risk. This practice, known as redlining, denied mortgage capital to neighborhoods with high populations of non-whites—shutting out African Americans from homeownership and the accompanying wealth creation.

Many of the FBI documents reference “phony leases” that Trump employees allegedly showed to black applicants to convince them that an apartment had already been rented. In an interview with federal investigators, one employee stated that he believed phony leases were a “common practice” at the company and had heard about their use from at least two building superintendents. Another employee detailed how he was instructed by management to lie about the cost of rent to deter black applicants. A doorman who had worked at 2650 Ocean Parkway in Brooklyn submitted a handwritten statement alleging that his supervisor instructed him to tell African Americans “the rent was twice as much as it really was.”

Subtler forms of discrimination mentioned in the files included requiring that applicants’ income be more than four times the monthly rent, which made even cheap apartments out of reach for many low-income black renters.

Even if black applicants could afford the rent, they were routinely turned away. A former rental supervisor at Tysens Park apartments in Staten Island—a complex that was overwhelmingly white—told the FBI that he had been instructed by a superior not to rent to African Americans or people on welfare. After a financially qualified black couple submitted an application, the supervisor recounted that he was told, “they’re black and that’s that.” Moreover, the man alleged that Fred Trump told him to “get rid” of the black residents in the complex by offering to pay their $500 down payment for cheap housing elsewhere.

Similarly, a former building superintendent at Lawrence Towers Apartments in Brooklyn says he “received instructions from the Trump Management Office concerning special handling of applications from Black families.” This two-track system meant that financially qualified white applicants were automatically approved, while black applicants were sent directly to the Trump office.

While the files do not clarify what happened to black applicants once they arrived at the Trump office, evidence suggests they were directed to apartment complexes with majority nonwhite residents. This practice, known as steering, involves directing white renters and buyers to majority-white neighborhoods, and black buyers and renters to majority-black neighborhoods. It was common within the real estate industry after the passage of the Fair Housing Act in 1968. The Washington Post reports allegations that Trump and his associates frequently steered minorities to one Brooklyn complex, Patio Gardens, that was 40 percent black. Other Trump-owned locations, including Ocean Terrace and Lincoln Shore apartments, had almost no black residents.

Ultimately, the DOJ suit resulted in a federal court order—called a “consent decree”—in which the Trumps and government officials came to an agreement on a proposed remedy. The Trumps were ordered to “thoroughly acquaint themselves” with the Fair Housing Act and place ads informing people of color that their properties were open for all.

Donald Trump, for his part, continues to deny any wrongdoing, consistent with his position at the time. He filed a $100 million countersuit for defamation against the government in 1973 (the countersuit was dismissed). The language of the consent decree itself states that the settlement was “in no way an admission” of guilt.

The Justice Department felt differently. As the Washington Post has reported, DOJ lawyers regarded the settlement as a victory for the enforcement of the Fair Housing Act, “one of the most far reaching [settlements] ever negotiated.”

The legacy of the Fair Housing Act and the open housing movement is itself mixed. While some view passage of the 1968 law as a victory against housing discrimination, which had been excluded from previous civil rights bills, others see the law as mostly symbolic. According to sociologists Douglas Massey and Nancy Denton, the act was “intentionally designed so that it could not work.” They argue that the bill was stripped of all enforcement measures as a way to ensure Republican votes. Indeed, the legislation does not permit the Department of Housing and Urban Development to bring lawsuits. Instead, the DOJ retains full power of enforcement, with mixed results. Sugrue argues that the toothlessness of the law puts most of the onus of enforcement on “private individuals” and “underfunded open housing groups.” Even when DOJ suits were won, damages were usually low. Settlements like the one in the Trumps’ case were most common.

And even with full enforcement of the housing law, it is not clear that the problem of residential segregation would be solved. Segregation persists today, and it is not only a result of income disparities. Massey and Denton have found that middle- and upper-class blacks are not more likely to live near whites than lower- and working-class blacks. Entrenched segregation continues to devastate black communities, propelled and exacerbated by job loss due to the suburban flight of businesses away from cities, massive disinvestment in urban low-income communities and predatory banking practices like the ones that fueled the Great Recession.

Donald Trump today bills himself as an ally of black Americans, conjuring up dystopian images of the dilapidated inner city and threatening to call in federal troops to address the “carnage” of violent crime in Chicago. In light of such bombast, it is worth taking a first-hand look at the case that put him in the news four decades ago. It will tell you all you need to know.