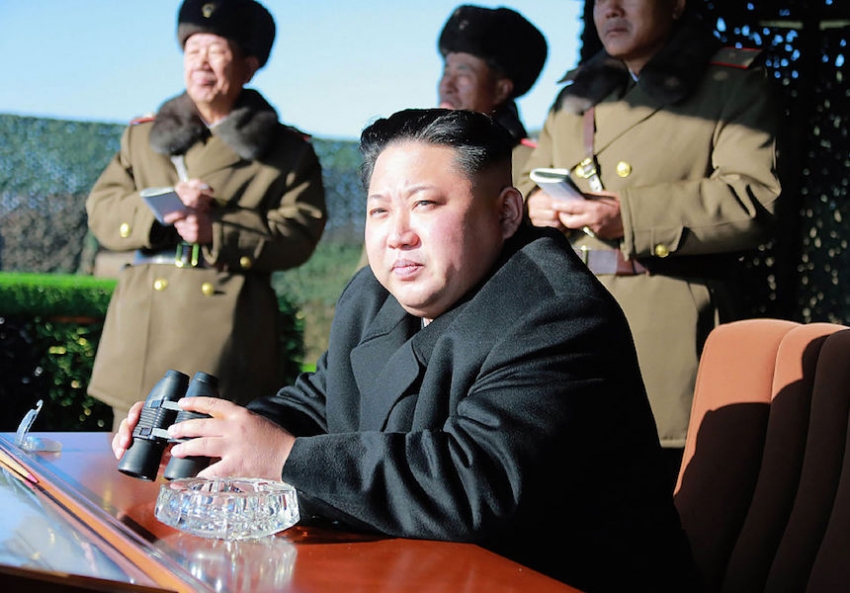 Kim Jong-Un may be a dictator—but much of the blame for the region's unrest lies with a history of U.S. violence. (KCNA via KNS/AFP/Getty Images)

Why the U.S. Is a Bigger Threat Than North Korea

Decades of military adventurism have done more to destabilize the world than any of the “rogue states” the U.S. targets.

The idea that the Bad is always bad and that the Good is always good resurfaces with predictable regularity.

This piece first appeared at Alternet.

A few years ago, I asked a retired Iraqi Air Force officer what it felt like to be bombed periodically by the United States in the 1990s. Whenever U.S. President Bill Clinton felt irritated, I joked, he seemed to bomb Iraq. The officer, a distinguished man with a long career serving a military whose political leadership he despised, smiled. He said with great lightness—“When our leadership said something threatening those words itself were taken to be terrorism; when the United States bombs, the world does not even blush.”

To me this is an intuitive statement.

I was thinking about it as I watched the parade in Pyongyang (North Korea) to celebrate the birth of Kim Il-sung. The imagery from North Korean television was grand—the vast Kim Il-sung Square packed with soldiers as the massive arsenal of North Korea was paraded past its leadership. On Twitter, amateur arms experts gave a run-down of this undersea missile and that trans-continental one. It was breathtaking to watch the performance and feel the anxiety in the Western media that North Korean would launch an attack on someone, somewhere. North Korea watchers poured over the sights, building fanciful theories based on what was being presented. Belligerence, it seemed, was on display here.

It is always the “rogue state” that is the threat to the world order—Iraq here, North Korea there. And in that “rogue state” it is always the dictator who commands the entire monstrosity. Mockery is the guise with Kim Jong-Un as it was with Saddam Hussein. These men have no taste: Saddam with his garish disco mustache and anachronistic military uniform and Kim with his New Wave haircut and his strangely out of proportion laughter. Threats are made to emanate from them—they itch to attack and are only held back by the democratic role of the United States, who sanctions the countries till they starve or patrols their waters with massive war ships to intimidate them into surrender. But the United States is not a threat. It is merely there to ensure that the real threats—Iraq then, North Korea now—are kept in check.

The author, in other words, is always the Eastern Despot.

Professor Charles Armstrong of Columbia University, one of the leading experts on the Korean War and on North Korea, writes that the U.S. bombing campaign against North Korea “more than any other single factor, gave North Koreans a collective sense of anxiety and fear of outside threats, that would continue long after the war’s end.” In fact, this anxiety and fear lasts into the present. It is easy to dismiss the North Korean attitude as one of brainwashing by the government. But if one looks seriously at the contemporary history of the North and the devastation caused by the U.S. bombing of the 1950s, then one would ask not of the brainwashing inside North Korea but of the brainwashing inside the United States.

Imagine what it must have been like in North Korea to hear that another U.S. battle group—the USS Carl Vinson and its allied ships – was moving to rendezvous in the Sea of Japan with Japanese naval vessels? It must have been chilling to hear U.S. President Donald Trump saying that Kim Jong-un “gotta behave,” the full meaning of the vernacular only available in the audio where Trump’s special menace is reserved for the word “gotta.” If they don’t behave, he suggests with the snarl, then the cruise missiles on the USS Carl Vinson and the MOAB bombs are ready.

Little wonder that North Korea’s Vice-Foreign Minister Han Song-ryol told the BBC that if the U.S. violated North Korean sovereignty, then “all-out war” would result. More chillingly, he said, “If the U.S. is planning a military attack against us, we will react with a nuclear pre-emptive strike by our own style and method.” These statements—in light of North Korea’s history—sound less like threats of war and more like threats of preservation. The North Koreans are not foolish. They look towards North Africa and see Libya, which had given up its nuclear program to its peril. It is the nuclear shield that protects them and it is one that they will hold up to the light as often as possible. In any actual military exchange, North Korea would be pulverized. This they know. But they also know that this is their only armor.

The idea that the Bad is always bad and that the Good is always good resurfaces with predictable regularity. The “rogue states” are always bad. That is self-evident. When they “kill their own people,” then it is worse. That has been the standard with Syria’s Bashar al-Assad. What makes him worse, say the pundits in the U.S. media and political class, is that he “kills his own people.” The chemical attack south of Idlib is the latest example of his mendacity. Investigations are irrelevant. It was evident to the media and to the political class in the West that only Assad could have authorized such an attack. This was a scenario that did not need explanations. A chain of associations was enough: chemical attack, children and Assad. No more detail was necessary.

It was more complex when the “rebels” bombed a convoy leaving the besieged towns of al-Foua and Kfraya, outside Aleppo, killing at least 126 people—including about 80 children. It was not Assad who did this attack, but the “rebels” which makes outrage suddenly unavailable. There was no outrage, indeed, when U.S. aircraft killed 30 civilians on Monday in a bombing run on the village of al-Bukamal near Deir az-Zor in eastern Syria. Three homes were flattened by the U.S. aircraft and civilians—including children—from six families were killed. There was no hue and cry, no denunciations in the United Nations Security Council, no hashtag, no media campaign for the United States to take action against the perpetrators. Ivanka Trump did not rush to her father with pictures of the dead children, awakening in him a conscience few knew existed. In at least one of the cases, the United States was the one that did the killing. Silence met these tragedies.

The Iraqi officers statement should say a lot to an American national. Or at least it begs the question of who is the real threat and why its belligerent actions are not considered to be the most dangerous problem facing the planet. It is easy to see “them” as the problem—the “rogue states” that are almost seen to be genetically predisposed to be erratic and dangerous. Far more difficult to accept that the history of U.S. violence against North Korea or the malice unfolding in West Asia is not the source of the great devastation that tears across the planet.

Vijay Prashad is professor of international studies at Trinity College in Hartford, Connecticut. He is the author of 18 books, including Arab Spring, Libyan Winter (AK Press, 2012), The Poorer Nations: A Possible History of the Global South (Verso, 2013) and the forthcoming The Death of a Nation and the Future of the Arab Revolution (University of California Press, 2016). His columns appear at AlterNet every Wednesday.