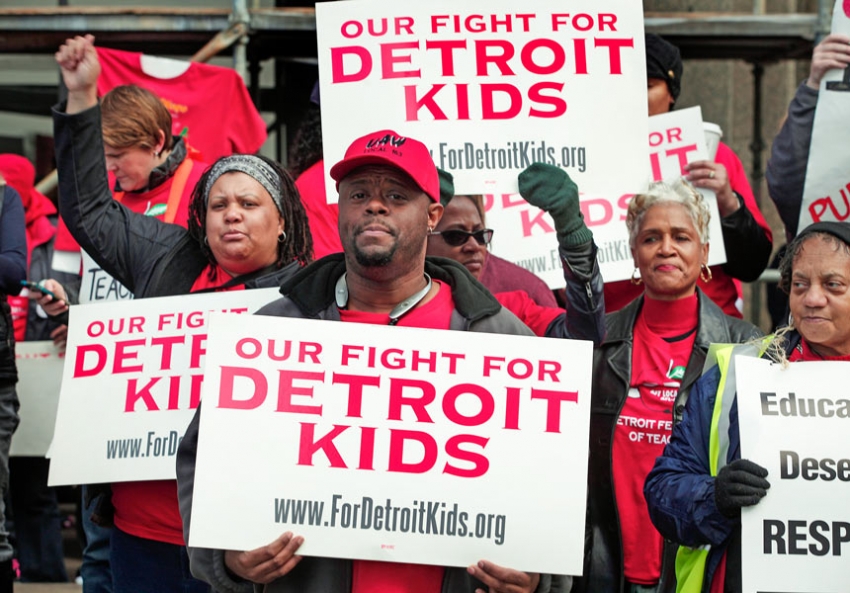 The Entire Public Sector Is About to Be Put on Trial

The Right’s assault on public-sector workers is an assault on the public sector itself.

For years, the Right has been hammering through state-level “right-to-work” laws in an effort to kill public sector unionism. It would see victory in the Janus case as the coup de grace.

Within the next year, the Supreme Court is likely to rule on the latest existential threat to workers and their unions: Janus v. AFSCME. Like last year’s Friedrichs v. CTA—a bullet dodged with Justice Antonin Scalia’s unexpected death—the Janus case is a blatant attack on working people by right-wing, moneyed special interests who want to take away workers’ freedom to come together and negotiate for a better life.

For years, the Right has been hammering through state-level “right-to-work” laws in an effort to kill public sector unionism; it would see victory in the Janus case as the coup de grace.

Right-to-work laws allow union “free riders,” or workers who refuse to pay union dues but still enjoy the wages, benefits and protections the union negotiates. Not only does this policy drain unions of resources to fight on behalf of workers, but having fewer dues-paying members also spells less clout at the bargaining table. It becomes much more difficult for workers to come together, speak up and get ahead. In the end, right-to-work hits workers squarely in the paycheck. Workers in right-to-work states earn less and are less likely to have employer-sponsored healthcare and pensions.

As a judge, Neil Gorsuch, Scalia’s replacement, sided with corporations 91 percent of the time in pension disputes and 66 percent of the time in employment and labor cases. If the court rules in favor of the Janus plaintiff—an Illinois public sector worker whose case not to pay union dues is being argued by the right-wing Liberty Justice Center and the National Right to Work Foundation—then right to work could become the law of the land in the public sector, weakening unions and dramatically reducing living standards for millions of workers across the country.

That’s the Right’s immediate goal with Janus. Then there are the more insidious effects. The case is the next step in the Right’s long and unrelenting campaign to, as Grover Norquist famously said, shrink government “to the size where I can drag it into the bathroom and drown it in the bathtub.” The Trump team has made no secret of this goal. Trump advisor Steve Bannon parrots Norquist, calling for the “deconstruction of the administrative state,” and Trump’s budget proposal cuts key federal and state programs to the quick. According to rabidly anti-worker Wisconsin Gov. Scott Walker (R), Vice President Mike Pence indicated in a February meeting with him that Pence was interested in a national version of Walker’s infamous Act 10, which eliminated public sector collective bargaining and gutted union membership.

An assault on public sector workers is ultimately an assault on the public sector itself. The Right can strike two blows at once: demonizing government and undermining the unions and workers who advocate for the robust public services that communities need to thrive. A ruling against AFSCME in Janus would decimate workers’ power to negotiate for vital staffing and funding for public services. Across the country, our loved ones will wait longer for essential care when they’re in the hospital, our kids will have more crowded classrooms and fewer after-school programs, and our roads and bridges will fall even deeper into disrepair. The progressive infrastructure in this country, from think tanks to advocacy organizations—which depends on the resources and engagement of workers and their unions—will crumble.

Public sector unions are working on building stronger unions, organizing new members and connecting more deeply with existing members to stave off the threat posed by Janus. AFSCME alone, where I serve as an assistant to the president, has a goal of having face-to-face conversations with one million of its members before the Supreme Court rules. So far, union leaders and activists have talked to more than 616,000 members about committing to be in the union no matter what the court decides. Even so, Janus will make it harder for public sector unions to lead, or even join, fights on social and economic issues that benefit all workers, union or not. And that’s just what the Right wants.

We need the entire labor and progressive movements to stand with us and fight for us. We may not survive without it—and nor, we fear, will they.

Naomi Walker is the assistant to the president of the American Federation of State, County and Municipal Employees, writes the “9 to 5” column for In These Times.