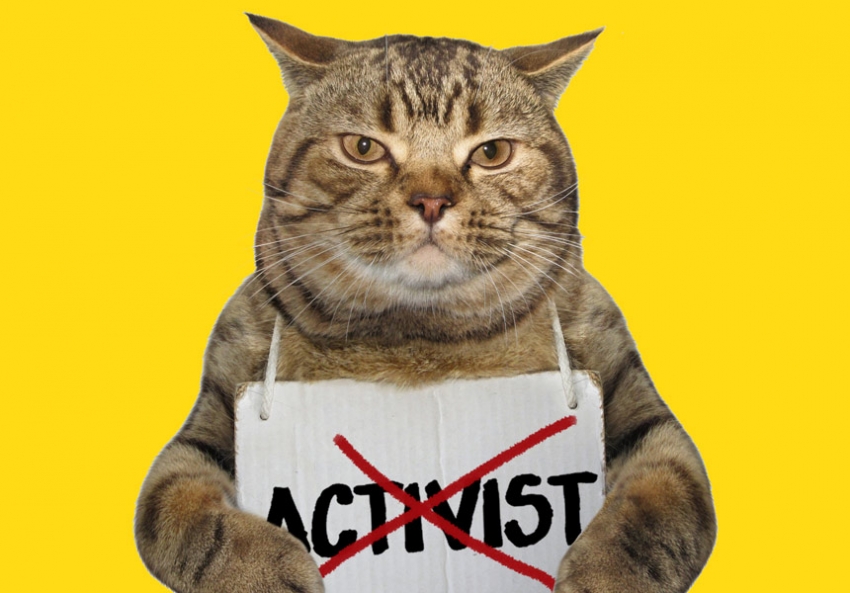 Why We Should Stop Using the Word “Activist”

Contesting power isn’t a hobby or a subculture—it’s a collective project pervading all facets of our lives.

Is there any reason to use a label that prevents people from considering anything we do or say?

One way that progressive political groups create barriers between themselves and society is through the construction of a relatively new category of political actor: the activist.

The word activist was first used about a century ago to describe those Swedes who advocated for Sweden to abandon neutrality and enter World War I on the side of the Kaiser. But as it is now used, the term became part of our lexicon in the 1960s. Today, activist carries important meanings absent in words that described earlier manifestations of collective action. Classifications like abolitionist, populist, suffragette, unionist or socialist all referenced specific contents. Activist, on the other hand, is a “contentless” label that traverses political issues and social movements.

Negative stereotypes about activists can negatively affect opinions about a given political issue once the issue is associated with activism. Consequently, because the term repels many people, it cognitively blocks their entry into collective action.

Yet, some people are attracted to activism for that very reason. Many activists take pride in activism partly because it is an expression of their willingness to do something that is unpopular. Indeed, some come to see their own marginalization as a badge of honor, as they carve out a radical oppositional niche identity.

This clustering of activists into silos fits into a broader trend in advanced capitalist nations toward greater individualistic self-expression and less civic participation. With this backdrop, it is as if activism has morphed into a specific identity that centers on a hobby—something akin to being a skier or a theater person or a foodie—rather than a civic or political responsibility that necessarily traverses groups and interests. In a society that is self-selecting into ever more specific microaggregations, it makes sense that activism itself could become one such little niche—that activism would become its own particular community of interest that self-selecting individual activists join. The problem is that, when it comes to challenging entrenched power, we need more than little niches and selfselectors. We need much larger swaths of society.

A fledgling movement that attempts to attract only individuals as individuals, one at a time, will never grow fast enough to effect big systemic change. Powerful political challengers have never built their operations entirely from scratch, but rather by means of politicizing, activating and aligning existing social blocs and institutions. Participation in the civil rights movement, for example, was hardly an individual matter; it tended to arise in relation to already established membership in communities and institutions—especially membership in black churches, historically black colleges and chapters of the NAACP. In the 1980s, Ralph Reed and other leaders of the emergent Christian Right studied the civil rights movement and emulated its approach, organizing whole congregations. In this way, fundamentalist churches became a major base of power that has maintained the hegemony of a right-wing alignment between Wall Street and social conservatives for the last few decades.

The Right seems to have learned more lessons of political strategy from the civil rights movement than has the liberal Left, which professionalized political involvement, producing a plethora of single-issue, nonprofit 501(c)3 organizations that are prohibited by law from contesting power in the electoral arena and whose memberships (if they have members at all) are, by and large, passive participants—useful mostly for sending donations.

At the same time, the radical Left dramatically imploded. Many movement veterans were understandably traumatized by the repression and intensity of the 1960s and 1970s. The remnant that stayed active created a common narrative that consisted of a constellation of shared meanings and reference points. Newcomers to “the movement” would then orient themselves toward the center of that constellation, learning the proper radical lingo, which was profoundly out of touch with the language, worldview and social practice of most Americans. Over time, this alienation and marginality vis-à-vis American society became deeply internalized in the practices and psychology of many radicals.

Thus, modern activism has been shaped by both the liberal and the radical Left. Idealistic, social justice-oriented young people today tend to take for granted that activism as such has always existed—that it is the category they must step into in order to take collective action. Consequently, most activists fail to question this construction.

When new activists enter a cultural space where political activity occurs only in a milieu of like-minded activists, the end result is that society’s most idealistic and collectively minded young people voluntarily remove themselves from the institutions and social networks they were best positioned to influence and contest. The idea that activism occupies a special space unto itself—that it is an activity disembedded from the day-to-day lives, cultural spaces and workplaces of most people in society—encourages activists to check their activism at the door when entering “non-activist” spheres. Alternatively, they may proudly and defiantly wear their activism on their sleeves, but more as self-expressive fashion that distinguishes them from the group—and likely inoculates others against taking them seriously—than as part of a genuine attempt at strategic political engagement.

Naturally, social justice-oriented people gravitate toward safe spaces where they feel appreciated. The slow work of contesting and transforming messy everyday spaces is, however, the essence of grassroots political organizing. When we do not contest, from within, the cultures, beliefs, symbols and narratives of the existing institutions and social networks that we are part of, we walk away from the resources and latent power embedded within those institutions and networks. This is not a winning trajectory. In exchange for our own shabby little activist clubhouse, we give away the farm.

Should we then abandon the “activist” label? A better question would be: Is there any compelling reason to persist in using a label that inoculates so many people against us and our messages? If this word effectively functions as a cognitive roadblock that prevents most people from considering anything we do or say, while also excusing sympathizers (who don’t consider themselves “activists”) from joining us, then inertia is not a good enough reason to hold on to such a disadvantageous label.

Abandoning the label, however, will only get us so far. It is more important that we break out of the cultural niche that the label has prescribed. Our work is not to build from scratch a special sphere that houses our socially enlightened identities (and delusions). Our work is, rather, to politicize everyday spaces; and to weave politics and collective action into the fabric of society.

Frederick Douglass famously said, “Power concedes nothing without a demand.” We can righteously shout slogans at the halls of power until we’re blue in the face, but in the long run we have to take responsibility for constructing the collective power needed to make our demands potent.

This essay was adapted from Hegemony How-To: A Roadmap for Radicals (AK Press)

Jonathan Matthew Smucker is a sociology doctoral student at the University of California, Berkeley, a political organizer and strategist, and the director of Beyond the Choir, a nonprofit that works to expand the base of social justice organizations.