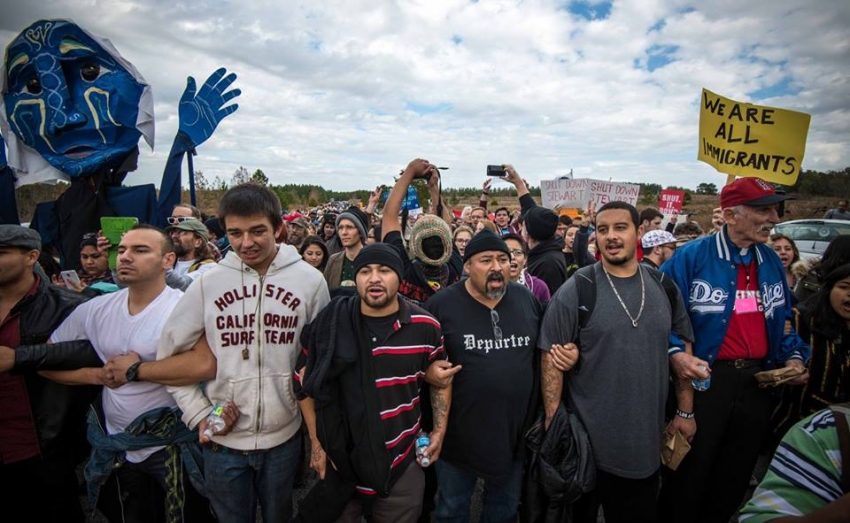 Like immigrant prisons across the country, the Stewart Detention Center in southwestern Georgia is plagued with accusations of human rights abuses. (Steve Pavey/ Hope in Focus)

Under the Shadow of Trump, Dismantling Obama’s Deportation Machine

Communities are fighting back against an immigrant prison in rural Georgia.

"Those targeted by multiple systems of oppression pay the greatest price."

Like immigrant prisons across the country, the Stewart Detention Center in southwestern Georgia is plagued with accusations of human rights abuses, including charges that its authorities routinely deny healthcare, provide substandard food and water and subject people to prolonged segregation. After a 27-year-old Panamanian national committed suicide at the facility on May 15, following a 19-day stint in solitary confinement, a coalition of social justice organizations is demanding that the detention center be shuttered on the grounds that it constitutes a deadly human rights violation zone that cannot be salvaged.

Stewart is not the only Georgia facility that has raised the alarm of the coalition, which includes Project South, the Black Alliance for Just Immigration and Georgia Detention Watch. Earlier this month, the groups protested outside the downtown Atlanta offices of U.S. Immigration and Customs Enforcement (ICE) to demand the closure of centers, including the Atlanta City Detention Center, which was the custodian of Atulkumar Babubhai Patel, a 58-year-old Indian national, when he died this month, reportedly of complications from congestive heart failure.

“We need to shut down these detention centers and end solitary confinement, which does irreversible damage to mental health,” Lovette Thompson, an organizer with the Black Alliance for Just Immigration, told In These Times. “It is very important that we end these detention centers altogether. Prisons are the problem with our society and definitely not the solution.”

Thompson is one of countless organizers across the South shining a light on immigrant detention centers, which are often hidden away in rural and remote areas. Many of those on the front lines of these efforts conceive of their work as part of a larger movement to challenge harsh, anti-immigrant policies, as well as the prison-industrial complex in a country that is by far the world’s largest jailer. They are organizing to defend black and brown migrants and refugees, disproportionately targeted by President Donald Trump’s crackdown, and funneled into the deadly deportation apparatus fortified and expanded by former president Barack Obama.

Like others in this movement, the Georgia coalition finds itself in the crosshairs of a Trump administration hell-bent on implementing the racist, anti-immigrant incitement that shaped its campaign. During the first three months of the Trump administration, immigration arrests spiked 38 percent compared to the same period last year. Despite the increase in arrests, deportations fell 12 percent during this period, according to Thomas Homan, the acting director of ICE. This means that, of the 41,318 people who were arrested by ICE between January 22 and April 29, many find themselves trapped in prison-like facilities, which have been rocked by hunger strikes and protests over abusive and indefinite detention.

But the coalition also faces the challenge of dismantling the deportation machine that was built by Obama before it was handed over to the Trump administration. Between 2009 and 2015, Obama deported more than 2.5 million people, an increase of 23 percent from his predecessor George W. Bush. This number does not take into account those individuals who died seeking entry to the United States, were turned away at the border or self-deported.

Obama’s historic deportations were coupled with high levels of incarceration. The Department of Homeland Security reports that, in fiscal year 2016, ICE locked up close to 353,000 people. In 2014, Obama made “family detention centers” a centerpiece of his response to large-scale, violent displacement from Central America, incarcerating mothers with their children in prison-like facilities.

“It is a real disgrace that Obama didn’t dismantle family detention before he left office,” Cristina Parker, an organizer with the Texas-based group Grassroots Leadership, told In These Times. “He put it into the hands of an extreme administration. Obama really perfected the system with respect to mass deportations.”

History of abuse at Stewart

With a capacity of 1,752 people, Stewart is operated by the private company CoreCivic, formerly the Corrections Corporation of America, under contract with ICE. This private ownership is emblematic of a nationwide trend: In 2015, 62 percent of ICE detention beds were operated by for-profit companies, as compared to 49 percent in 2009.

This month, Project South and Penn State Law released a report on Stewart and the Irwin County Detention Center in Ocilla, Georgia. It found that the living conditions at both do not “comply with the international standards of detention.” Due to the remote location of the facilities, those detained are torn away from their families and legal counsel, the report states. In addition, “the food and water provided in these detention centers are not hygienic. Either the food that is provided is stale or spoiled, or several foreign particles are found in it.”

According to the report, one unnamed man from Somalia, detained at Stewart, said that he was placed in segregation in retaliation for participating in a hunger strike. “There were about twenty other Somali detainees in segregation for the hunger strike,” he told researchers, without providing a precise date. “In segregation, I could not see outside and did not know if it was day or night. I could see the other detainees through a small window.”

Such practices are confirmed by recent reporting. Citing documents obtained through a Freedom of Information Act request, The Verge reported in February, “Beginning last April, and picking up in the weeks following the November election, dozens of detainees at an Immigration and Customs Enforcement facility in rural Georgia [Stewart] went on hunger strike in protest of their detention.” According to journalist Spencer Woodman, “staff began immediately locking them in solitary confinement for their participation in the non-violent protest.”

As recently as this month, a federal judge ruled that Stewart can force-feed Vitaly Novikov, a 61-year-old detained Ukrainian man, who had been waging a hunger strike. The forced feeding of people incarcerated in Guantanamo Bay was condemned as torture by the United Nations’ human rights office in 2013.

Also this month, Stewart was named as one of the facilities in an American Civil Liberties Union (ACLU) lawsuit seeking information about abuse and retaliation targeting hunger strikers in ICE facilities, including forced feeding and solitary confinement. “ICE has refused to turn over documents related to hunger strikes,” Carl Takei, an attorney with the ACLU’s National Prison Project, said in a press statement about the suit, adding: “We want to know just how widespread the abuse is.”

Fighting to save lives

Despite support from the outside, some people do not survive their ordeals. Jean Jimenez-Joseph, the 27-year-old Panamanian national who committed suicide at Stewart, died after nearly three weeks of solitary confinement. El Refugio, an organization close to Stewart that supports separated families, reports that, the day before Jimenez-Joseph took his life, a volunteer tried to visit him but was “turned away because of the conditions of his segregation (solitary confinement).”

Bryan Cox, a spokesman for ICE, confirmed to In These Times that Jimenez-Joseph was in “disciplinary segregation” for 19 days preceding his death, adding that his “treatment was in full accordance with agency’s detention policy.” He said he did not know how many people at Stewart are subjected to prolonged solitary confinement.

Investigations are underway in the recent deaths in ICE custody in Georgia, Cox claimed. CoreCivic and the warden’s office at Stewart did not immediately return requests for comment.

However, studies suggest that ICE cannot be trusted to investigate itself. A 2016 report released by the ACLU, Detention Watch Network and the National Immigrant Justice Center found that ICE’s violation of its own medical care standards contributed to at least eight in-custody deaths between 2010 and 2012. Instead of instating policies that could review deaths in the future, ICE failed to properly inspect such deaths and its own violations, the report found.

Meanwhile, those targeted by multiple systems of oppression pay the greatest price.

“We know that black immigrants are more likely to be in prison and detained by immigration because of this,” said Thompson. “We see it with people of color experiencing mass incarceration and criminalization on a grand scale. We definitely want to uplift and call for there to be some sort of change or reform in how our system is. Incarcerating more people is not the solution.”

Thompson’s assertions are confirmed by a recent report, which notes that black people in the United State are far more likely to be arrested and imprisoned, meaning they are also more likely to be targeted by immigration enforcement.

Thanks to long-term organizing led by communities on the front lines of such oppression, movement infrastructure for resistance already exists. Throughout the Obama years, community organizations and family members mobilized outside immigrant detention centers across the country, staging vigils, protests and public pressure campaigns to support those on the inside. In December, protesters shut down an intersection in Harrisburg, Pennsylvania, to demand the closure of the Berks County Family Detention Center and call attention to mothers forced to spend the holidays incarcerated with their children.

Such direct support efforts take place in cities and rural areas alongside a revitalized push to expand sanctuary nationwide, to include safety from police as well as ICE, and to mobilize communities to participate in direct defense against deportations.

“We do visitation, we amplify their stories with press statements, and we base our demands on what people inside detention centers are asking,” Azadeh Shahshahani, legal and advocacy director at Project South, told In These Times. “The only way you can really address the issue at a fundamental level is to shut [immigrant detention centers] down. We definitely feel that we’re part of larger movements to end mass incarceration and the targeting of black and brown people.”

This article is part of the Resister’s Digest series, aimed at amplifying the stories of front-line communities organizing in the era of Trump.