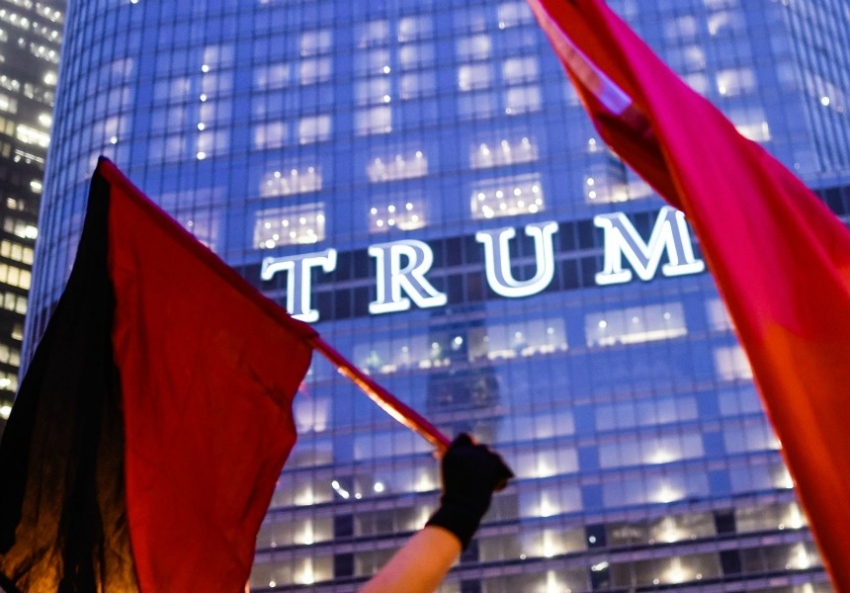 The Portland Killings Show Why We Need a Robust Antifascist Movement

It is time to find common cause in anti-fascist action. The stakes couldn’t be higher.

Every lone wolf attack requires the overwhelming power of unity to disperse the collective shock and regenerate ties of love and mutual aid.

The senseless killing of two Portlanders on public transit has shaken the nation. On Friday, May 26, a white nationalist named Jeremy Christian verbally assaulted two teenage women of color. When three men approached him to intervene, he stabbed them in the neck, killing two and critically injuring the third. The murders led many to contemplate what led Christian to such a heinous act and how to prevent such events in the future. Such sober reflections on a robust and strategic antifascist resistance require a careful accounting of antifascist formations that have years of experience organizing against figures like Christian despite continued marginalization by the broader left.

At first, the police attempted to play down the Islamophobic content of Christian’s attack. “He was talking about a lot of different things, not just specifically anti-Muslim,” Sergeant Pete Simpson said. “We don't know if he's got mental health issues, we don't know if he's under the influence of drugs or alcohol or all of the above.” Similarly, the media in Portland initially emphasized that, while Christian had joined a recent alt-right rally in Portland, he “appears to support an array of causes, some of which are violent.”

After local journalists dug into Christian’s biography and social media profile, a more accurate picture was exposed. Christian spent a life-changing period of time in jail. When he came out, his friends said he was a changed man.

“He was pretty hard to miss if you're involved with the metal scene in Portland,” according to one former friend of Christian’s who asked not to be named. “He wasn’t political at all.” He would get obsessive about comic books and heavy metal, but “I’ve never seen him get violent,” his friend told In These Times. “I did get worried when he started getting involved in those free speech rallies. I have no idea when he got sucked into that.”

According to his Facebook page, Christian supported Bernie Sanders and loathed both Hillary Clinton and Donald Trump. He also supported the idea of “Cascadia,” a bio-regionalist term indicating that the physical geography of the Pacific Northwest gives it a specific identity. However, when Clinton defeated Sanders, it seems to have triggered a baseline misogyny.

As the illiberal current of Christian’s thought brought him to support Trump’s campaign, he became increasingly obsessed with fascist politics. His rejection of monotheistic religion, common in the metal community, became an avenue for anti-Semitic rants. His prior “anarchist-nihilism,” a kind of libertarian rejection of society common in subcultural milieus, turned toward fascist recruitment available through the black metal scene and white supremacist “pan-secessionism.”

By October, he had started identifying as an indigenous Viking and insisting that the Pacific Northwest should be made into a “whites’ only zone.” He clearly parroted white nationalist ideas about racial separation through regionalist secession movements, calling his fantasy land “Vinland” and saying he would stab protestors outside of a show by a fascist metal band boycotted by local antifascist group, Rose City Antifa (RCA). Through his belief in the spiritual rebirth of an ultranationalist community based on Viking heritage in a reconstructed white territory of the Pacific Northwest, Christian had made the transition from an anarcho-nihilist metal head to a full-fledged Nazi.

As Christian grew increasingly angry with the resistance to Trump, he came to support the “free speech” movement as a thinly veiled excuse to instigate violence against antifascists. After Portland’s 82nd Avenue Rose Parade was canceled for fear of protests against a Republican contingent that had staged a violent rally in Lake Oswego weeks prior, a local far-right group called Warriors for Freedom, also known under leader Joey Gibson's video blog handle, “Patriot Prayer,” held a rally to challenge antifascists to open conflict. This was Christian’s moment.

Counter-demonstrators instead dressed as clowns and proceeded to ridicule the angry far-right protestors for hours. Draped in an American flag and brandishing a baseball bat, Christian made a bee-line directly toward the clowns but was intercepted by police. He spent the rest of the time screaming and sig heiling.

While members of the alt-right attempted to deflect criticism by disowning Christian and calling him a “Bernie Bro,” the neo-Nazi secessionist Harold Covington posted online that “it does look like he was one of ‘our’ many fringe characters, not Bernie Bro.” According to former friends, the Trump campaign was responsible for radicalizing him and leading him to the fascist movement.

The convergence of fascist metal bands, bioregional white nationalist politics and the far-right Patriot movement is precisely the milieu warned against by antifascist groups like RCA that have been marginalized and upbraided over the past ten years for being “alarmists” or “hysterics.” Many Portlanders are today coming to the realization that sorely needed antifascist efforts have lacked robust societal support.

A number of people of both left and liberal persuasions ask, “have the antifa groups played a role in escalating these violent conflicts.” The alt-right openly hopes to instigate violence in order to build up popular sympathy while brutalizing those who disagree with them. Yet, when one recognizes that the most recent antifascist demonstration in Portland consisted of a group of clowns playing games in the park, it becomes obvious that the far right has been using a strawman of antifa oppression as a foil. When their demonstrations are approached peacefully and with satire, vicious murders still ensue and fascists continue to escalate their “rallies” under the aegis of liberal universalism, free speech and self defense.

Some falsely identify all antifascism with the black bloc tactic and anarchist ideology. In reality, antifascism is autonomous from political ideology and its methods are far more diverse and involved. Antifascists generally do not denounce acts like property damage, but open discussion on strategy remains important. In a recent statement about a planned counter-protest against the coming far-right demonstration in downtown Portland this Sunday, RCA actually indicated that tactics like property damage may not prove wise in the current climate of state repression. “Putting ourselves at risk for mass arrests for very little tangible victory is not a sustainable model,” the collective states. Meanwhile, a second counterdemonstration is being planned by socialists and allies nearby.

To defeat fascism and prevent attacks like Christian’s, liberals and leftists must agree that antifascist work is valuable and refuse to endorse the smear campaigns against antifascist groups and individuals launched by the far right. Too often, liberals and leftists adopt strategies from other movements, disregarding and even discounting those who have more experience in the struggle against creeping fascism. To stop fascism, community groups must break this trend and rally around antifascist action to find common cause, recognizing that every lone wolf attack requires the overwhelming power of unity to disperse the collective shock and regenerate ties of love and mutual aid.

Alexander Reid Ross is a lecturer in geography at Portland State University and the author of Against the Fascist Creep (AK Press, 2017). His articles have been published in ROAR Magazine, Waging Nonviolence, Think Progress, and Truthout.