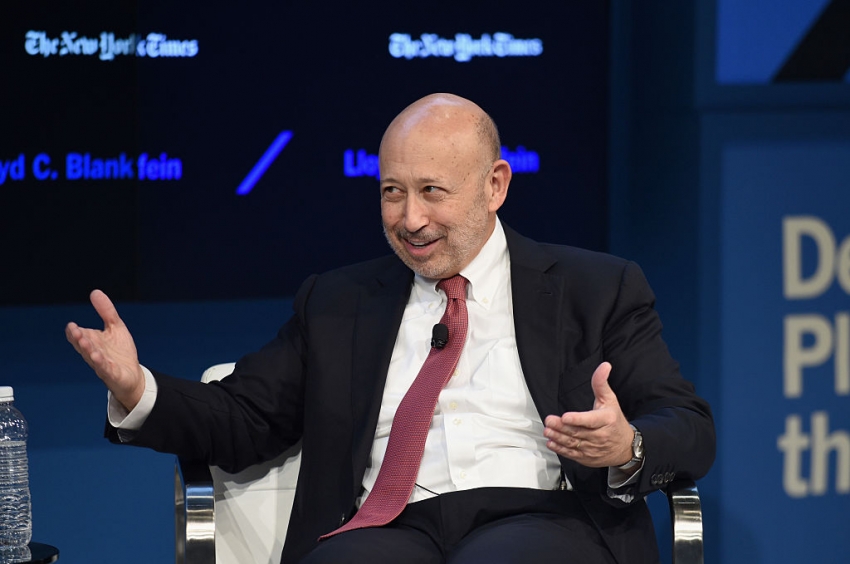 Blankfein fired up his long-dormant Twitter account to express support for the Paris Agreement. (Photo by Bryan Bedder/Getty Images for The New York Times )

Goldman Sachs CEOs are not your friends—even if they believe in climate change.

"If there is a pragmatic case to be made that the transitioning off of fossil fuels is economically prudent (and there is!), then business leaders will chase those profits. In the meantime, let’s not applaud them or other billionaires for believing in a scientific consensus or trying to make money off of it."

Thursday, Blankfein fired up his long-dormant Twitter account to express support for the Paris Agreement. Here’s what his post said: “Today’s decision is a setback for the environment and for the U.S.’s leadership position in the world. #ParisAgreement.”

On the whole, that’s not a bad tweet! The Paris Agreement, while deeply flawed, is generally a positive and even momentous step in the world of climate policy, and we would all be better off if our walking train wreck of a president hadn’t announced that he was pulling us out of it. Blankfein, meanwhile, played a central role in careening the United States into a crippling financial crisis from which many have not recovered. He made more than $54 million at his job in 2006—even as he was helping to create the recession. His bank also happens to be a financier of the Dakota Access Pipeline, which oil began coursing through this week despite several safety hazards and outstanding legal challenges. In other words, Blankfein is the worst, and no one should help Goldman Sachs with its PR by retweeting its CEO.

But the real point isn't that Blankfein is scum—though he is. It’s that siding with Blankfein and other “1 percenters” is a politically suicidal move for the climate movement to make in 2017 and could sabotage any hope the United States has of implementing any sort of adequate climate policies before it’s too late.

Environmentalists have traditionally had trouble not turning celebrities and billionaires into heroes, making people like Al Gore and Leonardo DiCaprio some of the most recognizable faces in the fight against rising tides. A similar spirit arose Thursday, with organizations like the Natural Resources Defense Council praising Blankfein’s tweet. Several major oil companies even joined in on the fun of endorsing the agreement, despite the fact that they’re selling a product that could turn the planet into a hellscape.

Climate change is being painted by the right as an issue that only elites and a handful of radical leftists care about. Nearly every poll conducted on the issue shows that this is patently false. But greens praising Blankfein help the Steve Bannons of the world make their case for them.

For one, these people do not actually care about slowing climate change. Part of the reason why oil giants like Exxon and Chevron and Shell like the Paris Agreement so much is that it contains some weak language. Getting behind it, for them, is an easy way to look like they care about the planet and the people living on it without actually doing the thing that would serve the planet best: Closing their doors entirely. Symbolic statements about the Paris Agreement, whether you're an oil company or a banking giant, are just good PR.

Still, there’s a certain logic behind lifting up these 1 percenters: Environmental issues have long sat in a fringe silo, and one of the United States’ two ruling parties is doing everything in its power to make earth unlivable. People like Gore and DiCaprio bring a kind of mainstream appeal. Vast swaths of the American public know who they are even if they can’t name a single environmental organization, and—if they can use their star power to help spread the gospel on climate change—the message will reach more people. A similar line of thinking extends to business leaders: If the people greens want to convince to pursue action on climate change are elites (business leaders, politicians, etc.) making it clear that their peers are taking steps toward sustainability should be a powerful incentive to get onboard.

Now, more than ever, though, that approach is painfully out of touch with an American political climate in which people across the ideological spectrum are railing against establishment politics and economics.

Trump’s speech this week helps show us why retweeting Blankfein is such a bad idea. The Rose Garden announcement leaned heavily on a couple of tropes about climate change invented by the right, and adopted with aplomb by the Bannon and Breitbart wing of American politics. The White House painted the decision to withdraw from the agreement as a defense of America’s “forgotten” men and women against a globalist plot, calling it a scheme cooked up by the world’s elites to effect a “massive redistribution of United States wealth to other countries.”

“The Paris Agreement handicaps the United States economy in order to win praise from the very foreign capitals and global activists that have long sought to gain wealth at our country’s expense,” Trump garbled. “They don’t put America first. I do, and I always will … It is time to put Youngstown, Ohio, Detroit, Michigan, and Pittsburgh, Pennsylvania … before Paris, France.”

This is nonsensical, especially considering the Paris Agreement itself has virtually nothing to with Paris other than the fact that it was drafted there. Yet the president’s statement draws (read: fabricates) some pretty clear political lines: Hard-working, down-on-their-luck Americans versus a cabal of elites out to screw them over. In this context, praising the 1 percenters who disagree with Trump may not be the best way to erode the perception that only wealthy people care about climate change.

There’s also literally no reason to do this. If there is a pragmatic case to be made that the transitioning off of fossil fuels is economically prudent (and there is!), then business leaders will chase those profits. In the meantime, let’s not applaud them or other billionaires for believing in a scientific consensus or trying to make money off of it.