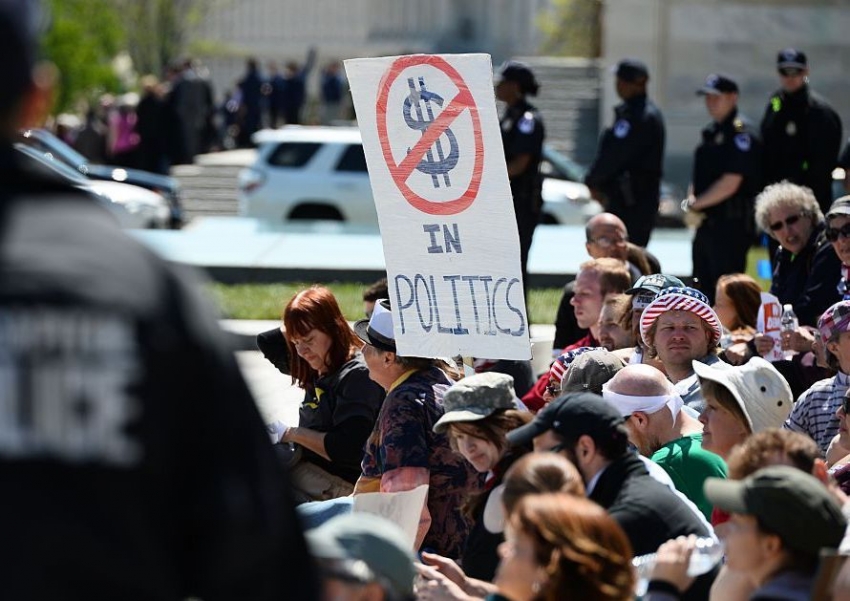 Protesters wait to be arrested during a Democracy Spring demonstration in Washington, D.C., on April 13, 2016, calling for democracy reform. (ANDREW CABALLERO-REYNOLDS/AFP/Getty Images)

10 Years Ago, Connecticut Got Big Money Out of Its Elections. Now Democrats Are Gutting the Program.

The landmark public financing system is under threat.

Why would Democrats so readily put public financing on the chopping block?

Most Americans recognize that our democracy is under assault by big money. According to a 2015 NYT/CBS poll, a full 84 percent of Americans believe money has too much influence in our elections, and 85 percent want fundamental changes to our campaign financing system. Last year, 10 ballot initiatives to enact democracy reform passed across the country, from liberal cities such as Berkeley and San Francisco to the deep red state of South Dakota.

These initiatives ranged from campaign contribution limits to lobbying restrictions to arguably the most important method of cleaning up our elections: public financing. This upswell is encouraging, but it is only the start. Those working to clean up the system would do well to look toward the few states where citizens have already passed groundbreaking and even further-reaching legislation to reduce the role of big, private money in state elections. Among the top of the list is Connecticut, a state that, with the introduction of the Citizens’ Election Program (CEP) in 2005, seriously curbed the influence of corporations and the rich on state elections.

Yet, this beacon of American democracy could soon dim, as the state legislature is on the verge of gutting the law that gave the state its democratic promise.

Giving the rich the boot

In 2005, after a major corruption scandal involving then-Republican governor John Rowland rocked the state, Connecticut overhauled its elections process with the CEP. Based on similar initiatives in Maine and Arizona, this program provides full public financing for eligible candidates seeking a state political office. These grants, unlike partial public financing, cover all election-related costs. Candidates qualify for CEP by collecting a specific number of $5 to $100 donations from citizens in their district or, if they are seeking statewide office, from anyone in Connecticut. These donations must be from individuals only, not corporations or PACs. (The CT Mirror explains the qualification process and how much money is allocated to each office in more detail here).

The CEP is funded not by taxes but by the sale of abandoned property in Connecticut. In total the program is allocated an average of $10-11 million a year, which is enough to cover all races in the state over a four-year cycle. Using CEP funds is voluntary, but almost 90 percent of current Connecticut state legislators and 100 percent of current state officers (governor, lieutenant governor, secretary of the state, treasurer, comptroller and attorney general) chose CEP funding for their election campaigns, according to an analysis by the League of Women Voters of Connecticut.

“The passage of the Clean Elections program in Connecticut was an extraordinary achievement,” explains Nick Nyhart, who was involved in the original drafting of CEP and is now president and CEO of the good government group Every Voice Center (formerly known as Public Campaign). “Thanks to unrelenting grassroots pressure, the state’s political leaders came together across partisan lines to enact sweeping reform. It was the first time in any state that incumbent lawmakers had voted to eliminate big private donations for their own seats, replacing that money with public funds and small donations from their constituents.”

The benefits of public financing are countless. As Connecticut state senator Gary Winfield puts it, public financing “not only leveled the playing field, it completely upended the playing field.” Moreover, he recently explained, CEP “opens up politics to people who don’t have access.” The American Prospect reports that CEP “increased competition for legislative seats. In both 2000 and 2004, at least one of the major parties failed to field a candidate in nearly 40 percent of Connecticut’s legislative races. By 2010, that percentage had fallen to 29.”

State Rep. Matthew Lesser ran for office in 2008, the year the CEP was launched, and was among the first candidates to use the public financing option. “I took on an incumbent, and at the age of 25, nobody thought I had a chance,” he says. “But the Citizens’ Election Program made that and many other improbable wins possible. I understand that’s threatening to incumbents and special interests, but it’s important and we need to protect it.”

Public financing also allows candidates to spend more time talking to voters. Barnard College professor Michael Miller, author of Subsidizing Democracy: How Public Funding Changes Elections and How It Can Work in the Future, estimates that full public financing leads to thousands more interactions per election cycle between publicly financed candidates and voters. According to his analysis, participation in such programs reduces the proportion of time spent on fundraising from 11 percent to 2 percent. Candidates who were freed from fundraising spent their time with voters.

Given the Supreme Court decisions like Citizens United, big money can still play a large role in elections through independent expenditures (spending not coordinated with a campaign), especially in the gubernatorial race. But overall the state has succeeded in reducing the corruption—and the appearance thereof—that plagued the state before CEP.

Death by a thousand cuts

Over the years, however, legislators have chipped away at the program’s funding. As Miller explained to In These Times: “One of the most common tactics for opponents of campaign finance laws is to incrementally weaken the related laws and create loopholes. It is a process of ‘death by a thousand cuts.’” In total, from 2009 to 2012, the legislature cut the program’s funding by 40 percent.  Nevertheless, at $10-$11 million a cycle, the program kept the bare minimum needed to survive.

But in the last two years, CEP’s very existence has come under threat with bipartisan vigor.

In fall 2015, facing budget shortfall, the state Democrats advocated for the suspension of CEP to “save” money. But citizens across the state responded with outrage, flooding their representatives with angry calls. The board of the State Elections Enforcement Commission (SEEC), the five-member, bipartisan citizens’ committee in charge of administering CEP, made the extraordinary move of approving a resolution opposing and condemning the plan.

“[The] Commission unanimously opposes the Democrats’ proposed budget that would suspend the successful and nationally recognized Citizens’ Election Program for the 2016 election cycle,” wrote the Commission in a press release. “Such a suspension would set the CEF on course for permanent underfunding and would return our candidates for elected office back on the path to the reliance on special interest money for their campaigns and reverse a decade of progress.”

Within a few days, the Democrats rescinded their plan.

The CEP appeared safe. Yet, fewer than two years later, the Republican minority has dropped CEP from its 2017 budget altogether, and the Democratic majority wants to cut another $5 million from the program for each of the next two allocation cycles (approximately a 25 percent cut over four years).

According to the SEEC, these cuts would slice at the heart of the program. A $10 million cut over two years “would drastically impact our ability to award CEP grants in 2018 and beyond,” says Michael Brandi, executive director and general counsel of SEEC. “It’s pretty simple: Without this money going forward, we estimate we will be about $10 million short of what’s needed to operate the clean elections program.”

Why would Democrats so readily put public financing on the chopping block?

One reason might be that the program provides the same amount of funding for incumbents and challengers, which decreases the advantage of incumbents. Studies have shown that while full public financing does not always diminish the likelihood of incumbents winning, it translates to a smaller margin of victory. Tighter elections can keep incumbents more accountable to their constituents, for they realize reelection is not always guaranteed and that anyone—regardless of wealth—could mount a viable challenge. The number of primary challengers also tends to increase, likely making incumbents even uneasier. Not surprisingly, therefore, incumbents in the few states with public financing are often the most willing to express opposition to clean elections programs. In fact, Miller says his survey found that many politicians often run with public funds in their first election, and then turn to private funding sources in subsequent elections.

“For years, corporate-backed legislators and special interests in Connecticut have exploited our budget shortfalls with attempts to gut clean elections under the false pretense that our state cannot afford the program,” says Lindsay Farrell, executive director of the CT Working Families Party.  “What is unconscionable is that legislators who have used the program to run for office would consider undermining the program for future candidates.”

Connecticut’s budget shortfall is grim, indeed. The state is projected to have a $5 billion-plus deficit for the next two years. That said, cutting $5 million from the CEP or eliminating it altogether would only save a negligible amount of dollars (according to the League of Women Voters of Connecticut, CEP represents 0.0001 percent of the state budget) while also dealing a major blow to fair elections in the state. And, in light of the rising citizen anger toward big money in politics, weakening CEP would be a bad political decision.

Moreover, “cutting CEP will cost the state money, not save it,” Miles Rapoport, former Connecticut secretary of the state, and current senior practice fellow in American democracy at Harvard’s Kennedy School, tells In These Times. “In addition to all its advantages for democracy, I have zero doubt that the program has saved Connecticut hundreds of millions of dollars, by avoiding the tax breaks, regulatory tweaks, and hidden subsidies that lobbyists routinely got through in the days when legislators depended on them for campaign funding. This makes no sense even in budget terms.”

In 2012, Karen Hobert Flynn, then vice president of state operations for Common Cause—now the organization’s president—gave a statement that rings even more true today. “I know these are difficult times,” she said, “but you can’t put a price on clean government. What’s really set Connecticut apart so far is leadership that has been willing to make the hard choices needed to preserve clean elections. If you lose that, you begin the slippery slide back to ‘Corrupticut.’”

It’s now up to Connecticut residents to fight for their gem of an elections program.