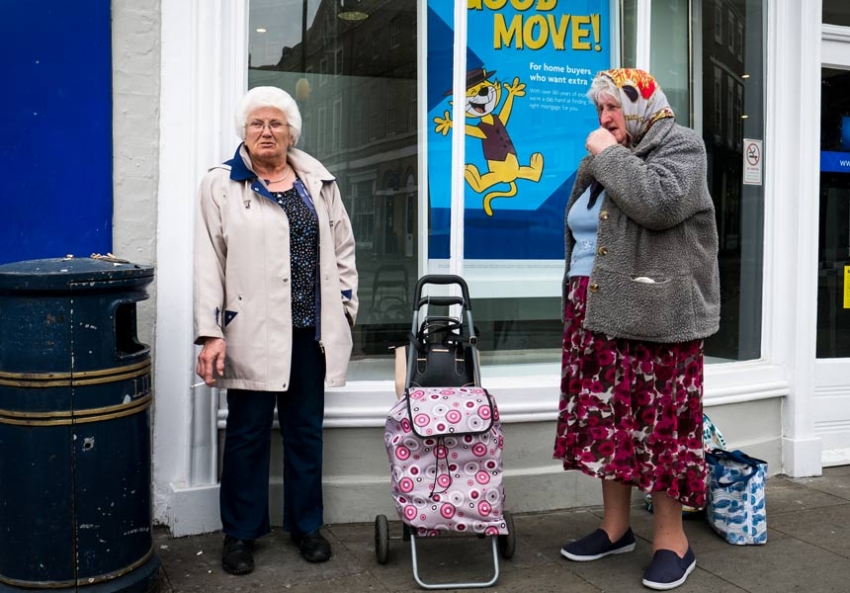 Two women stand in Boston, a Lincolnshire town where 75 percent of voters chose Brexit. Are they Somewheres or Anywheres? (Jack Taylor/Getty Images)

Those Who Leave and Those Who Stay: Examining Britain’s Populist Revolt

David Goodhart’s The Road to Somewhere goes nowhere worth following.

Goodhart’s is a disembodied voice, one that disavows its own ideological roots and its visceral hostilities.

There was once, apparently, a golden age of unity and consensus in British society. It corresponded—roughly and fancifully—to the heyday of the Empire, and preceded, by a few happy years, our joining what was then the European Economic Community in 1973. Now, according to former Financial Times journalist David Goodhart in The Road to Somewhere: The Populist Revolt and the Future of Politics, British society is worryingly split. Not by class or income, but by education and mobility. He divides us into “Anywheres” and “Somewheres,” and claims that he began as the first, but is now sympathetic to the second.

Anywheres are characterised by the length of time they’ve spent in school and their consequent ease with being “abroad.” Somewheres, by contrast, left school without qualifications, have a limited experience of other places and people, and fear change.

These camps are, of course, mapped onto the Brexit split, and Goodhart also suggests that some such division might explain the rise of Trump and of so-called populism in continental Europe.

Goodhart is determined to believe that many Somewheres voted for Brexit out of “common sense” and not racism, and that these “decent” people have been patronised and misunderstood. The Anywheres rule the land and ignore the needs and interests of the Somewheres, who are the majority, by refusing “to accommodate moderate national feeling,” cynically promoting multiculturalism and looking down on women who don’t work outside the home. Most of them have been, in his view, Labour voters. Oddly missing are the leaders of the Brexit movement: the Tory politicians, almost all of whom are university educated.

Goodhart’s villains are the Labour Government Anywheres, who, beginning in 2004, let in a million Central and Eastern European workers. He worries that so many immigrants will fail to assimilate. He blames left-wing councils that busied themselves with “cordoning off minorities in their own districts with their own leaders and social centres,” while schools encouraged immigrant children to wear national dress and speak their mother tongues at home. (And so they should, by the way, bilingualism being an indubitably good thing.) In short, the Anywheres continued “the colonial heritage with a smiley face pasted on.” This is clever, subversive and unfair. At the very end of his book, and circumspectly, Goodhart congratulates Theresa May on getting things right. He is a lot less neutral than he pretends.

One thread runs through the book that is worth considering. When I was at Cambridge in 1952, fewer than 4 percent of young people went to university. Today the figure is about 50 percent, and the majority are women. This has brought about significant changes; not least, a preponderance of relatively well-off families in which both parents are professionals, and who tend to be less religious, less traditional, and more accepting of homosexuality and foreigners. More important, perhaps, is that having a degree has become key to finding work. And that, combined with a huge reduction in manufacturing jobs and a failure on the part of a whole string of governments to strengthen technical education and support a robust apprenticeship system, puts the non-graduate section of the population at a disadvantage we’d not have thought inevitable in my youth.

However, I’m still not comfortable in Goodhart’s Anywhere camp. I don’t recognise a shared politics or experience or even voting history with more than a few others there. I do understand the fury that made people vote us out of Europe, though I wish they hadn’t.

Goodhart’s is a disembodied voice, one that disavows its own ideological roots and its visceral hostilities. He is right to make much of the Labour Party’s failure to keep the loyalty of working-class voters. That doesn’t mean that Conservative governments making the poor poorer and the rich richer is less cynical and dishonest than the Left’s record, or that we should stop resisting policies that dissolve the welfare state, increase inequality and legitimise chauvinism. It’s possible to feel relief as well as envy that France, at least, has refused the proposals of Marine Le Pen.