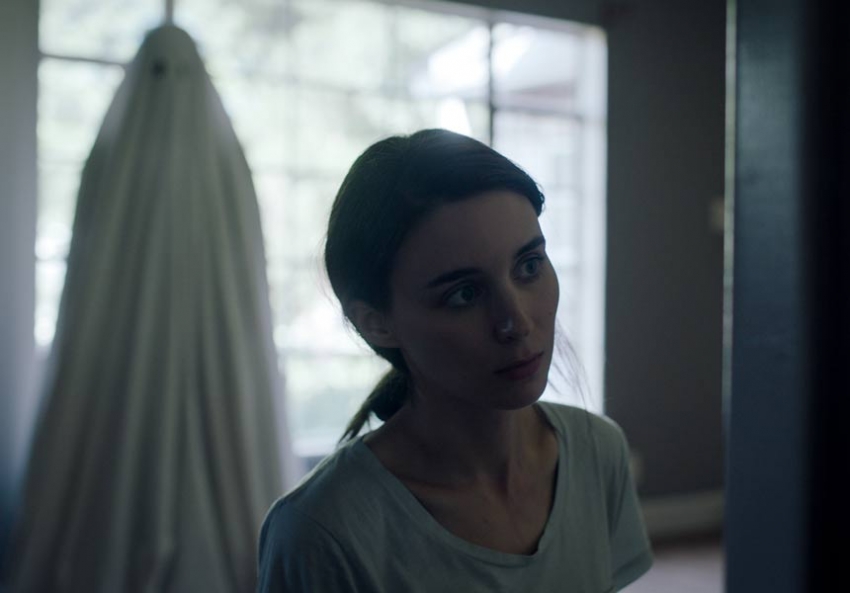 Casey Affleck (pictured left, we think) spends most of "A Ghost Story" under a sheet. (Bret Curry, courtesy of A24)

The Frustrating Yet Beautiful Drama of “A Ghost Story”

A Ghost Story is less a narrative than an inspired mood piece, an art object with its fair share of preciousness to offset the poetry.

The new film A Ghost Story is a daring piece of work—as in, it dares you to buy its crazy conceit, dares you to put up with its glacial pace, and dares you to connect with its almost completely inexpressive characters. You’re also dared not to groan at the pretension of trying to evoke so much with so little. Writer-director David Lowery may or may not be the artist he thinks he is—his previous films are the interesting but self-important indie Ain’t Them Bodies Saints and the already-forgotten reboot of Disney’s Pete’s Dragon, which bespeak only a minor-league grandiosity and a need for a paycheck. But the new movie is something else—a kind of vacuum that grows into a mystery, and ends up getting under your skin.

It’s not hard to be cynical about A Ghost Story, because the film is so unwelcoming. It’s a brutally, almost spitefully, slow film. At times, Lowery seems to think he’s Taiwanese master minimalist Tsai Ming-liang, and he’s not. Then there’s the central conceit—life seen from a ghost’s perspective, the ghost itself literally presented to us as a man with a sheet thrown over him, with blackened eyeholes cut into it, à la Charlie Brown. It’s not a horror film at all, but a kind of ironic dirge.

Casey Affleck and Rooney Mara are a young, nameless couple renting an old, grubby ranch house somewhere in Texas, and we only spend a little time with their nuzzling and cooing before he is killed in a car wreck, right in front of the house. We hardly ever, in fact, get very far from that house. We, like Affleck’s affectless ghost figure, are stuck there, watching Mara try to grieve and continue with her life (which Lowery has her do with an almost total absence of emotion—for once, Mara is cast to type).

The film’s strategy through this is hyper-observational—the shots are long and often maddeningly unrewarding. (Mara, watched by the ghost, sits on the floor and catatonically eats most of a pie in one uncut shot.) Lowery’s gambit here, abetted by a moaning ambient score and beautifully dusty cinematography, depends upon the almost childish poetry of the implacable ghost figure, who expresses nothing, never speaks, and only occasionally resorts to minor poltergeist violence when upset. (It’s probably Affleck under there, but it may as well not be.)

The ghost feels like a visual joke at first, but soon we accept it, and the conceit begins to turn into something crushingly lyrical when another ghost appears in the window of a nearby house, and the two silently communicate (with subtitles). The second ghost (whose sheet has flowers on it) is waiting—“Who for?” “I don’t remember.”

Ever so slowly, Lowery’s self-serious experiment gains resonance you couldn’t have seen coming, largely by virtue of gigantic leaps in time. The filmmaking turns dazzling here, making a year or more evaporate in a single cut, or sometimes in the middle of a slow tracking shot. Mara’s lost girl eventually packs up and leaves—after depositing a tiny note in a door-molding crack, which becomes the ghost’s focus. He can’t get at it, though, and renters—a Spanish-speaking family, a house of gabby thirtysomething partiers—come and go. Then, suddenly, the house is being wrecked. Then, suddenly, an office building is being built, the ghost staring down from the girders.

To say more of the third act’s metaphysical cartwheels, all still performed at a snail’s crawl, would be spoiling the film’s residual power. And it is residual—I was still knuckling my forehead in skepticism through to the last few minutes. But that’s when the film’s mournful ache abruptly feels earned, and its mysteries become tangible. Days later I was still thinking of Lowery’s inspired imagery, as when the ghost stands in the middle of a demolished house, surrounded by birdsong and dusk light, unable to find the molding with the note.

Hidden in the brooding quiet of the movie—there may be a total of 15 minutes of dialogue—are a few very spare but genuine spiritual ideas, and following Lowery’s lead I’ll resist the urge to articulate them. But A Ghost Story is less a narrative than an inspired mood piece, an art object with its fair share of preciousness to offset the poetry. (Lowery even shot the film in the old-school 4:3 frame ratio, nearly square, with rounded corners.) It can be torture, but in the end, it’s beautiful.