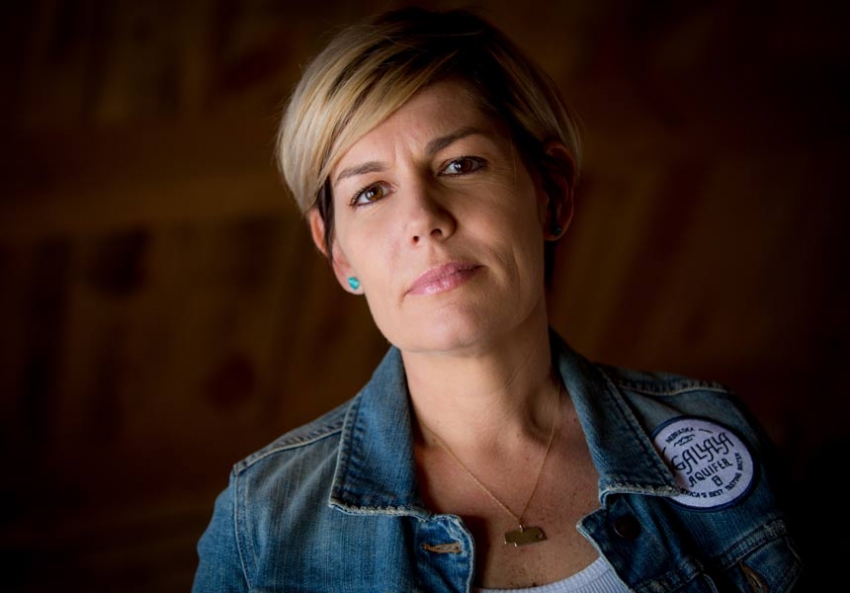 “If we actually are going to rebuild the Democratic Party, and if we want to elect Democrats at the local and state level, then you cannot fund a bunch of elite groups in Washington, D.C.,” says Jane Kleeb, chair of the Nebraska Democratic Party. (Photo by Mary Anne Andrei)

The Political Revolution Is Alive and Well in Nebraska

Climate campaigner and Democratic Party activist Jane Kleeb is lighting a fire on the prairie.

We have to get back to the 50-state strategy’s decentralized model of trusting people to know what they’re doing. We know how to win elections—on the ground.

The political revolution is alive and well in Nebraska. In December 2016, Jane Kleeb, a self-described “mom with a minivan,” took the reins of the Nebraska Democratic Party. In the race for party chair the previous June, Kleeb, a Sanders surrogate during the primaries, defeated Chuck Hassebrook (who backed Hillary Clinton) by 42 votes out of the 410 cast. Following her election, Kleeb threw down the gauntlet and declared: “The opposition party is now here.”

Kleeb grew up in Broward County, Fla., the daughter of a mother who was president of Florida Right to Life. In 2004, at the age of 30, she got her start in national politics working for the Democratic National Committee as the executive director of the Young Democrats of America. In 2011, she was elected to the school board of Hastings, Neb. She lives outside the town of 25,000 on a farm with her husband Scott and their three daughters.

In 2010, Kleeb founded Bold Nebraska, an organization that began organizing opposition to the Keystone XL pipeline. In These Times first featured Kleeb in a February 2014 story in which she spoke out against AFL-CIO President Richard Trumka’s endorsement of Keystone and invited him “to come to Nebraska and visit with farmers and ranchers whose livelihoods are directly put at risk.” Two months later, In These Times covered the anti-pipeline protests in Washington that Kleeb helped organize.

This spring, Kleeb was back in the spotlight. She joined the board of Our Revolution, the organization that grew out of the Sanders campaign, which endorsed Heath Mello, a progressive Nebraska state legislator who ran for mayor of Omaha. The Wall Street Journal falsely reported that Mello had cosponsored a bill “requiring women to look at an ultrasound image of their fetus before receiving an abortion.” Ilyse Hogue, president of NARAL Pro-Choice America and a big Clinton supporter, ran with the story, lambasting Sanders and Tom Perez for kicking off the Democrats’ Unity Tour with an endorsement of Mello. (She apparently forgot that NARAL had endorsed Clinton’s pro-life vice-presidential pick Tim Kaine months before.) Perez subsequently waffled on his support of Mello, who lost in a city that Clinton had carried. Kleeb, however, was a vocal defender of Mello and remains so. (For another perspective on the controversy, see “Democrats’ Waffling on Abortion Rights Isn’t Just Wrong, It’s a Huge Political Mistake”) In These Times spoke with Kleeb by phone.

How is the Democratic Party’s 50-state strategy working out?

It’s not, yet. We have to get back to the 50-state strategy’s decentralized model of trusting people to know what they’re doing. We know how to win elections—on the ground. We had this very progressive candidate running for mayor in Omaha, Heath Mello, and Democrats in the entire state were behind him. This race was critical—it was in one of the top 10 congressional district targets in the country for us to take back the House. But Mello is pro-life, like many of the Democrats in Nebraska, and Democratic National Committee Chair Tom Perez got pressured by NARAL and sent out a press release condemning Mello. Democrats can’t stay in this D.C. bubble and think that is how we’re going to win elections.

How do progressive down-ballot candidates in Nebraska have to differ from those in, say, Brooklyn?

They have to be connected to where the people are on the issues that they care about, because they’re representing those individuals. Heath Mello was authentically pro-life. His mom was a teenage mom who cleaned houses to raise a family, and he feels deeply committed to the choice that his mom made. But we also have to challenge the voters and make sure that they understand that being pro-life means expanding Medicaid, and not taking away funding from health clinics, especially our rural health clinics. That’s where we Democrats have to stand up. We can’t become Republican-lite.

Farmers and ranchers know that I’m a progressive Democrat and that I support gay marriage, and I support gun safety laws, but that I also support their property rights. So, you earn voters’ respect by being very clear on where you stand—but at the same time, really trying to push people out of their comfort zone.

Do you think it was a mistake to make Heath Mello’s race a national race?

Nationalizing races is exactly what we should be doing, so we can lift up the local issues that we’re fighting for and showcase Democrats like Mello, who stood up for DREAMers when nobody else was in Nebraska, and who as a legislator came up with the first-ever climate action plan in the state. If we’re not going to take dark money and big corporate money, we need as many people as possible to be giving small donations to candidates all over the country.

Can someone be a pro-life progressive?

You can definitely be pro-life and progressive. But, if you’re pro-life in name only, that’s where I would draw the line. Some Republicans are pro-life in name only. If they were truly pro-life, they would be giving more money to health clinics, rather than taking it away. They would be expanding Medicaid for all, rather than taking health insurance away. But pro-life Democrats also need to support women’s reproductive rights. So if you’re a pro-life Democrat and you are out there saying that you’re going to ban abortion, then you should probably change your party registration to Republican. But if you’re a pro-life Democrat doing everything you can to reduce the number of abortions—expanding birth control, expanding Medicaid, supporting comprehensive sex ed in schools—then you’re just as progressive as a pro-choice Democrat.

Nebraska is shaping up to be the last stand against the Keystone Pipeline. What is your strategy for winning?

Focusing on the landowners. We believe—not just with Keystone XL but with all pipeline fights—that the one thing that citizens hold in their control that the pipeline companies need is land. We are going to focus on property rights. Keystone would be the first time in our state’s history that we are giving eminent domain for private gain to a foreign corporation. That opens a dangerous door to other foreign corporations that are currently buying up land in our state, particularly China, which wants to create these big hog facilities to then ship their products back to China. Those foreign corporations use our land and threaten our water so they can get products to the export market. That’s exactly what TransCanada is doing.

Do you see a path for U.S. action in time to avert catastrophic climate change?

The path is clear. One, end eminent domain for private gain for fossil fuel corporations. Two, ban new fossil fuel infrastructure, including drilling in our public lands and in our public oceans. Three, create a hard-hat revolution. Not just for building solar and wind, which clearly we need to do, but also expanding the use of biofuels, which I know some of my sisters and brothers in the climate movement don’t agree with. I think it takes the market share away from big oil, and it’s certainly better for the environment and for emissions.

We have let the climate get very close to the brink of disaster. What could the climate movement have done better?

Not make us feel guilty for not having an electric car, which is sometimes what I feel in a room of climate advocates. I drive a minivan and my husband drives a pickup, therefore I’m a bad environmentalist? Um, no. Can we start talking about systemic ways that we’re going to tackle climate change?

How did growing up with a mother who was an anti-abortion activist affect you?

I would go with my mom to every speech she would give, every vigil and protest she would organize. I saw from an early age that the way you take action is in the streets. I didn’t realize that wasn’t normal for other families.

What do you see as the likely future of the Democratic Party?

And the future of the GOP?

The Republicans continue to go to the extreme far right, from building the wall and banning Muslims, to taking away health insurance and voting rights, to saying that climate change does not exist. They’re on a very narrow electoral path, and I think you’ll see a very different 2018 election cycle.