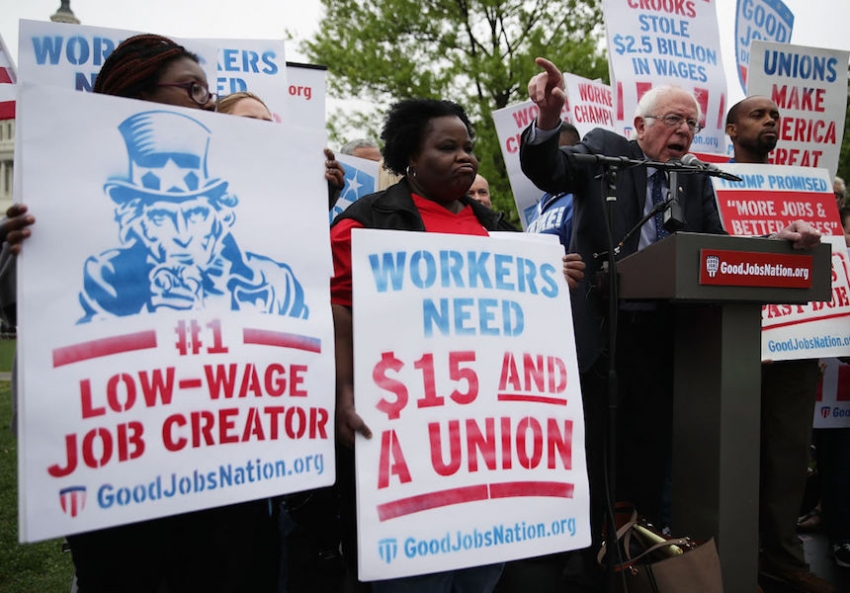 From the budget to the minimum wage, the Congressional Progressive Caucus and its members have long advocated more radical policies than the typical Democrat. (Alex Wong/Getty Images)

The Congressional Progressive Caucus has proposed a radical People’s Budget—but to pass it, we need to take over the Democratic Party.

If the best thing one can say about Trump is that he is consistently dead wrong, the second best is that he has galvanized the opposition.

Anyone who has doubts about what’s at stake in the battle for the future of the Democratic Party should read The People’s Budget: A Roadmap for the Resistance, released in May by the Congressional Progressive Caucus. (Comprised of 75 U.S. representatives and Sen. Bernie Sanders, the CPC is the largest caucus in the House.)

As an economic manifesto that puts “political and economic power back in the hands of the people,” the People’s Budget is not only a rebuke to Trump and his draconian 2018 budget, but a challenge to a Democratic Party that has for too long elevated the well-being of Corporate America over that of working people and the environment.

In his 2018 budget, Trump invests $200 billion in infrastructure spending over the next 10 years. Transportation Secretary Elaine Chao explained it this way to reporters: “The administration’s goal is to seek long-term reform on how infrastructure projects are regulated, funded, delivered and maintained.” That’s Republican-speak for “privatization of public assets.” To help fund these “reforms,” Trump is looking to raise the gasoline tax and turn Interstate highways into toll roads, two measures that would disproportionately impact rural Americans.

The People’s Budget, operating under the radical principle that “public money should go toward the public good,” would invest $2 trillion in infrastructure over the next 10 years “to transform our fossil-fuel energy system, overburdened mass transit, deteriorating schools, lead-contaminated water systems, and crumbling roads and bridges.”

The Economic Policy Institute estimates that in its first year, the CPC budget would create 2.4 million jobs for people of all backgrounds in both urban and rural America. The CPC proposes funding these public works with a financial transaction tax on the sale of stocks and bonds.

Yet, no matter how hard one wishes, the CPC’s grand ideas will come to naught if they aren’t accompanied by a corresponding plan to gain the power needed to implement them.

If the best thing one can say about Trump is that he is consistently dead wrong, the second best is that he has galvanized the opposition, and that opposition is mobilizing to take back Congress in 2018. After all, a budget like The People’s Budget only has a chance of passing if we have a progressive Democratic Congress and a Democratic president—and that can only happen if the Democratic Party manages to address the social discontent in the body politic and return to its progressive, populist roots.

One hopeful sign: The Bernie-Hillary divide has begun to blur as progressive Clintonites find common cause with Berniecrats. Theo Anderson reports in this issue’s cover story, “Bernie Sander Supporters Are Taking Over the Democratic Machine, One State at a Time,” how Kimberly Ellis, a progressive African-American activist who supported Hillary Clinton in the primaries, made a bid in May for the chair of the California Democratic Party, backed by both the California Nurses Association and Our Revolution. In a hotly contested election, Ellis lost, but only by 62 out of about 3,000 votes cast—a victory if one sees the ballot box being half full, rather than half empty.

If the Democratic establishment wants to win in 2018 and 2020, they should embrace their left flank and engage with the energized constituencies that are clamoring for a just redistribution of wealth and power in American society.