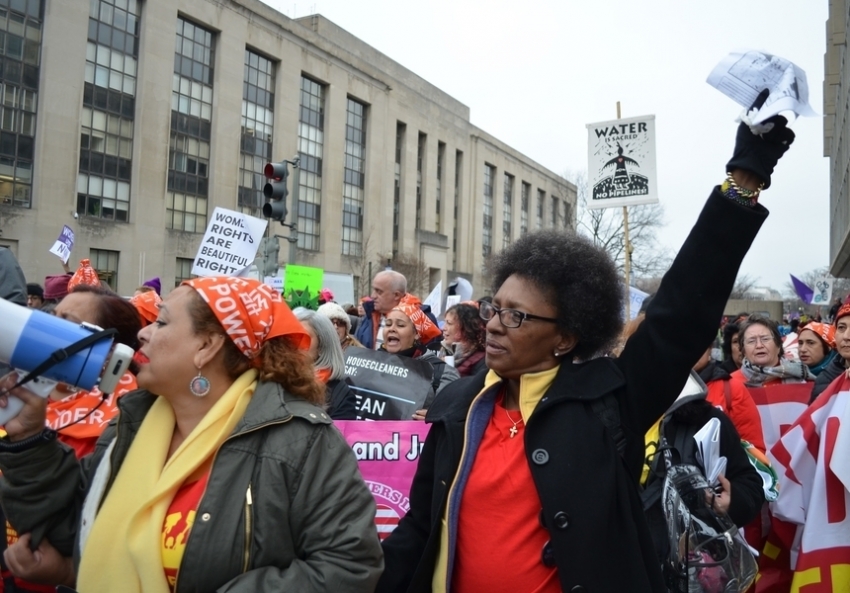 Members of "We Dream in Black" participating in the Women's March in January. (Photo courtesy of National Domestic Workers' Alliance)

Capitalism Is Built on the Backs of Black Women

By consigning Black women to low-paid care work, a new report shows, racialized capitalism is continuing the legacy of slavery.

“You are using one set of people to sustain you, but you are not giving anything to them to sustain them.”

“We, as Black women and people, understand the system is something put in place to make us work hard,” says Joan Lewis, a home healthcare worker who lives in Atlanta and organizes as a member leader with the social-movement group National Domestic Workers Alliance (NDWA). “It’s the truth that we get exploited,” she tells In These Times. “It's the truth that we get exploited, especially domestic workers, because we're doing a job that nobody values.”

Just how true this is is made clear in a new report released by the NDWA in partnership with the Institute for Women’s Policy Research. The study finds that Black women in the United States are disproportionately segregated into low-wage service and care industry jobs. Black women participate in the workforce at a greater rate than white women, but are signifantly more likely to live in poverty. In fact, despite relatively high employment levels, with six in 10 Black women working, Black women suffer a greater poverty rate than women of all other ethnic groups save Indigenous women. One in four Black women in the United States lives in poverty, with Black women who work full-time, all-year earning just 64 cents to the white man’s dollar.

Report authors Asha DuMonthier, Chandra Childers and Jessica Milli draw on numerous data sources to produce a state-by-state analysis of the “Status of Black Women.” They point to “occupational segregation” as a key culprit behind the exploitation and dispossession of this demographic.

“Black women are more likely to work in service occupations than any other broad occupational group,” the report states. “Service occupations—which include personal care aides, maids and housekeeping cleaners, nursing assistants, cooks, and food-service staff—tend to have the jobs with the lowest pay.” Roughly 28 percent of Black women work in jobs that fall under this sector, compared to 18 percent of white women. Meanwhile, those providing key services are largely unable to afford care for their children: In 48 states, child-care costs surpass 20 percent of Black women’s median annual earnings.

“We take care of the children so you can go to work, start a business and go to school, yet we are not able to do that for ourselves and our families, because our pay is not yet adequate,” says Toni Johnson, an NDWA member and domestic worker based in New York. “You are using one set of people to sustain you, but you are not giving anything to them to sustain them.”

Economic disparities appear to be worsening. The Great Recession dramatically widened gulf along race lines, with a 2014 Pew Research Center poll concluding that “the current gap between blacks and whites has reached its highest point since 1989.” And the NDWA report determines that Black women’s real median yearly earnings dropped by 5 percent between 2004 and 2014.

This is no historical accident. “Domestic work is rooted in the legacy of slavery,” writes Alicia Garza, special projects director for NDWA and co-founder of Black Lives Matter, in the report’s foreword. “Enslaved Black women were forced to provide unpaid labor under brutal conditions for white landowners.

This historical disgrace set the foundations for today’s “racialized economy,” Garza argues. The oppression of Black women, meanwhile, extends beyond the workplace into key U.S. institutions. From public school systems to New York’s stop-and-frisk policing, Black women are disproportionately punished and profiled, the report determines. While Black women had the highest voting rate of all demographic groupings—both men and women—during the last two presidential elections, they “remain underrepresented at every level of federal and state political office in the United States,” the authors note.

The oppression they face is manifold: Black women are also twice as likely as white women to be incarcerated, the report notes. A separate study released by University of Washington researchers in 2015 found that in 2006, 44 percent of Black women reported having a family member in prison, compared to 12 percent of white women and 6 percent of white men. Women are more likely to shoulder the financial and psychological burden of having a family member locked up. Black women—especially transgender women and gender-nonconforming people—disproportionately face lethal gender-based violence. Meanwhile, Black immigrants, overall, are more likely to come into contact with the prison-industrial complex and deportation authorities.

Celeste Faison is an organizer with the NDWA’s “We Dream in Black” program, which was first conceived in 2013 to build Black domestic workers’ power and now has chapters or affiliates in six cities. She tells In These Times that the report’s findings expose the brutal realities of the economic system. “We know that capitalism always requires there to be a cheap labor force,” she says, “and we know that racism is the institution that justifies that cheap labor force existing.”

Black women and gender-nonconforming people are at the forefront of organizing efforts to resist this system and improve conditions for everyone, from the fight for a living wage to the Movement for Black Lives. “I see what happens when we group ourselves together, band together,” says Lewis, who is working to expand her Atlanta chapter of We Dream in Black. “We know this is not right. I would like other Black domestic workers, domestic workers and women to know that this is not life, it's survival. We want not just to survive, but to have a better life.”

This article is part of the Resister’s Digest series, aimed at amplifying the stories of front-line communities organizing in the era of Trump.