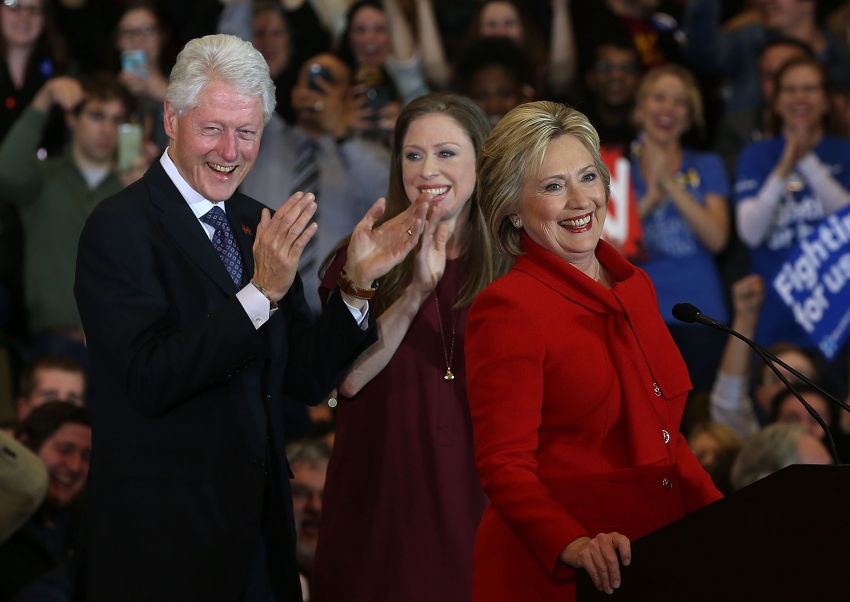 2017 is not 1996, our current political crisis demands something new. (Photo by Justin Sullivan/Getty Images)

Centrism Is in a Death Spiral: Our Only Hope Is to Let It Perish

While some cling to the Clinton era of the 1990s, the future belongs to a socialism for the 21st century.

The Democratic Party moving away from its reliance on corporate backing and embracing a bold left agenda poses a direct threat to what Penn and Stein have spent their careers in politics building.

If you want to gaze upon the last gasps of a dying political ideology, look no further. A recent New York Times op-ed making the case for why Democrats should move “back to the center” succeeds at laying out the myriad reasons why corporate-driven, third-way centrism has taken its final bow.

And who better to deliver such a salvo than the thoroughly discredited, longtime pollster and public-relations strategist for the Clintons, Mark Penn? At a time when voters are rejecting the Democratic Party’s centrist drift, Penn and his co-author Andrew Stein—a “lifelong Democrat” who endorsed Donald Trump in 2016—provide a prime example of exactly what the party must avoid doing if it hopes to avoid fading into complete irrelevance.

Penn and Stein’s primary conceit is a longing for the Clinton era of the 1990s when centrist politics reigned supreme and a Democrat occupied the White House. But their analysis betrays a fundamental misunderstanding of history and politics.

Yes, Bill Clinton won in 1992, and again in 1996, running on a centrist agenda. But Democrats also lost both houses of Congress during his time in office, and later the presidency in 2000. Key policies pushed through by Clinton—including welfare reform, the crime bill and financial deregulation—helped to shred the social safety net, catapult mass incarceration and bolster corporate power over the U.S. economy.

There is zero evidence that a Democratic Party aligned around these types of policies would win in 2017, or that what voters today are demanding is “fiscal responsibility,” as Penn and Stein claim. In fact, the very policies that are popular right now—expanding social security, taxing the rich, making public college free, providing universal healthcare and breaking up the big banks—fly in the face of what these scions of centrism propose.

Rather than engaging with the fact that the ideas embraced by the Left are actually what voters want, Penn and Stein simply claim:

Bigger government handouts won’t win working-class voters back. This is the fallacy of the left, believing that voters just need to be shown how much they are getting in government benefits.

But the central idea behind left economic politics has never been about explaining to voters why they should be grateful for publicly-funded social programs: It’s about expanding those programs so they make people’s lives better.

For Penn and Stein, however, the solution lies in unleashing the powers of the market to stop the economy from being “regulated to death,” a core principle of neoliberalism.

In 2016, Bernie Sanders galvanized over 13 million voters by running openly as a democratic socialist in the Democratic primary on an unapologetically left agenda, opposed to the decades-long reign of neoliberal Democratic politics.

Sanders is currently the most popular politician in the United States, and national Democrats—from Kristen Gillibrand to Elizabeth Warren—are getting on board with aspects of his program, including single-payer healthcare. In contrast, Hillary Clinton infamously stated during the primary campaign that single payer would “never, ever come to pass.”

This leftward momentum points to the likely rationale behind Penn and Stein’s defense of centrism: It’s in a death spiral.

And, as beneficiaries of corporate-driven politics, the authors themselves stand to lose much by the demise of their preferred strand of neoliberal politics.

Mark Penn runs a public-relations firm that does business with major corporate clients, including AT&T, Microsoft and Herbalife, as well as an investment firm that finances both Democratic and Republican advocacy companies, as reported by The Intercept.

In 2007, while working for Hillary Clinton’s primary campaign, Penn wrote in his personal blog, “I have found the mixing of corporate and political work to be stimulating, enormously helpful in attracting talent, and helpful in cross-pollinating new ideas and skills … And I have found it good for business.”

Andrew Stein, who was once president of the New York City Council, is known for rejecting the city’s public electoral finance system in favor of receiving contributions from corporate and wealthy individual donors. His endorsement of Trump included a call for lowering taxes on corporations and the rich while deregulating businesses.

Stein’s other claim to fame is his 2011 conviction for tax evasion as part of a massive Ponzi scheme in which he used his connections to launder money to pay rent on a personal estate in Bridgehampton, New York.

The Democratic Party moving away from its reliance on corporate backing and embracing a bold left agenda poses a direct threat to what Penn and Stein have spent their careers in politics building.

So, it’s no surprise their advice for the party is to reject the political winds, put their hands over their ears and go forward full-throttle with a political project that saw its culmination in a historic loss by the Democratic Party’s centrist nominee to one of the most vulnerable Republican candidates in modern political history.

This will surely not be the last time centrism’s true believers pen op-eds or hold closed-door meetings pushing for a return to the halcyon days of the 1990s when their personal and political fortunes were high and the economy was free of its shackles. Not when neoliberal insiders such as Rahm Emanuel are advising the party.

But 2017 is not 1996. The 2008 financial crisis showed how market forces can decimate communities, impoverish working people, take their homes, eliminate their jobs and cause their debt to skyrocket. Our current political crisis—with Trump’s increasing attacks on workers, women, marginalized communities and the future of humanity—demands something new.

Penn and Stein seem to be aware of the specter that haunts them, as they stress the “need to reject socialist ideas.” But overcoming the crises we face will mean embracing egalitarian policies that provide a better and more reliable standard of living across the board. With inequality at its highest levels in decades, and only continuing to grow, centrism has proven entirely incapable of accomplishing these goals. As long as corporate elites are put in charge of the economy, this trend is sure to continue.

Socialist ideas are popular, as polls continue to prove. And some Democrats are beginning to embrace them. Moving left is the only real path out of the wilderness for the party, even if Mark Penn and Andrew Stein lose out along the way.