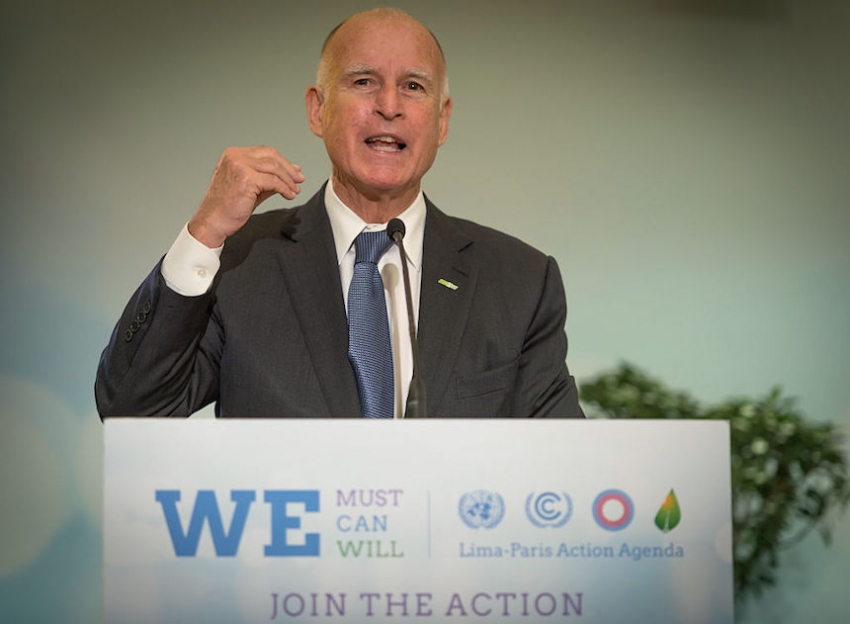 California Gov. Jerry Brown, who has touted his state as a global leader on climate, speaks at the UN Climate Change Conference (COP21) in Paris in December 2015. (Jonathan Raa/Pacific Press/LightRocket via Getty Images)

Regulators say the measure would make it impossible to meet the state’s greenhouse gas reduction targets by 2030.

"It's industry that has been at the center of this negotiation for the entire time.”

California Gov. Jerry Brown and several state Democratic legislators unveiled legislation Monday evening that would extend the state’s controversial cap-and-trade program, which is set to expire in 2020. Progressive lawmakers and environmental justice groups from around the state were quick to fire back, saying the proposal is too generous to California’s biggest polluters.

Assembly Bill 398 was crafted in an attempt to garner the support of Republicans and business-aligned Democratic lawmakers, and with them, a two-thirds vote. A 2010 ballot initiative, Proposition 26 (the “Stop Hidden Taxes” Initiative), amended the California constitution to require that revenue-raising proposals—like cap-and-trade—be passed by two-thirds of the legislature.

Over 50 national and California-based groups, like the California Environmental Justice Alliance (CEJA) and 350.org, say that Brown’s push to get a compromise  by any means necessary has yielded a measure that prioritizes politics over pollution controls. Under AB 398, the California Air Resources Board (CARB)—now entrusted with overseeing the state’s emissions reductions—would lose its authority to regulate carbon dioxide from sources subject to cap-and-trade rules. According to Diane Tackvorian, a member of CARB and the Environmental Health Coalition, the bill would “[make] it impossible for [CARB] to accomplish our mandate, which is to reduce greenhouse gas 40 percent below 1990 levels of 2030,” a goal passed into law last year via SB 32. While market-based programs like cap-and-trade can incentivize companies to pollute less, they tend to be most effective at bringing down emissions when paired with strong regulations on heavily polluting industries.

AB 398 would also drastically curtail local air quality districts’ ability to regulate emissions from the state’s many oil refineries. Miya Yoshitani, Executive Director of the Asian Pacific Environmental Network (APEN), calls the bill “complete and utter giveaway to the oil industry.” She believes the proposed restrictions are a direct response to APEN and other groups’ collaboration with the Bay Area Air Quality Management District (BAAQMD) to rein in refinery emissions more aggressively than CARB has at the state level. The BAAQMD has come out in official opposition to the bill.

“We worked directly with our air district to produce some of the most groundbreaking rules to date…with regard to refinery emissions,” Yoshitani said on a press call Tuesday. “Those rules are now at risk.

In these and other provisions, the bill’s language closely mirrors that contained in draft legislation obtained by In These Times in late June that had been circulating in Sacramento among parties involved in the extension negotiations, including the governor's office. That proposal lifted several suggestions near-verbatim from an industry wishlist—drafted by a law firm contracted by the Western States Petroleum Association—of proposals for how to continue the cap-and-trade program. In response to that reporting, a representative of Governor Brown’s office claimed that, “Our role from the start has been to convene parties with different interests and to facilitate the exchange of ideas and language to see where we can find common ground.”

Brown’s office did not respond by deadline for a request to comment on this story. In a response to a previous story, a representative from Brown's office told In These Times that there had been “weeks of discussions between the administration and legislative leaders with Republican and Democratic legislators, environmental justice advocates, environmental groups, utilities, industry and labor representatives, economists, agricultural and business organizations, faith leaders and local government officials.”

An alliance of 50 of California’s environmental groups say that AB 398 is overly friendly to interests like WSPA—which represents some 27 extractive companies and is among the state’s most influential lobbyists.

In addition to pre-empting regulation, the bill carries over credits and allowances from the current market into the next version of the cap-and-trade program. Seventy-two percent of allowances under the current cap-and-trade go to the oil industry. If an extension of the program preserves these allowances, anywhere from 100-300 million tonnes worth of unsold carbon credits could be available for sale in its second phase from 2020 to 2030, according an analysis of potential extension scenarios by the non-partisan California Legislative Analyst’s Office, or LAO. An oversupply “potentially increases emissions and puts downward pressure on [credit] prices,” the LAO concluded.

According to Stanford economist Danny Cullenward, oversupply of credits constitutes a structural flaw in the existing cap-and-trade program, and one AB 398 would not resolve. An earlier version of the bill, obtained by E&E News’s Debra Kahn, shows that as of July 3 negotiators had included provisions to address oversupply issues. That language was redacted from the final draft that became AB 398. In addition to allowing rollover, the bill—as it stands now—would permit the continued, unlimited “banking” of credits, which, because of the carbon market's oversupply problem, will allow emissions to stay higher for longer. The combination of banking and oversupply means that companies could simply purchase a pile of offsets or credits instead of bringing down their emissions for that quarter. (Credit auctions are held every three months).

In May, state assembly members state Sens. Bob Wieckowski (D-Fremont) and Kevin de León (D-Los Angeles) introduced another cap-and-trade extension measure, Senate Bill 775, which was backed by many of the groups now opposing AB 398 (see here and here for more details). If passed, that bill would have eliminated such banking of carbon credits, along with all offsets and allowances for polluters, and distributed a sizable portion of the revenue generated from the program to California residents through a yearly dividend.

Much like the revenue from the current cap-and-trade system, money generated by AB 398 will be directed toward a series of green infrastructure projects around the state. Some portion would also be devoted to filling holes in the state budget left by tax breaks built into the bill.

AB 398 would eliminate the state’s fire protection fee, now paid largely by rural landowners, and fill in the lost funds with those gained through the cap-and-trade program. Additionally, it could extend an additional $100 million in annual tax breaks to the energy sector, on top of the $220 million in tax breaks that sector already receives.

“What we’re seeing is two very different theories of how to get to two-thirds,” Cullenward says. The theory behind SB 775, Cullenward told me, was to garner public support by giving constituents a financial reason to support the program—the potential to receive hundreds of dollars in yearly dividends. To garner industry support, it also factored a border-adjustment measure into the cap-and-trade program, which would effectively levy a carbon tax on imports to keep California-based companies competitive with those operating in states without one.

By contrast, “what you see in AB 398 is a compromise directed at bringing industry on board,” he says. “This is largely the current market design with a few minor tweaks, most of which directly address industry concerns and benefit specific industries with the intention of bringing them on board.”

Amy Vanderwarker, Co-Director of CEJA—which represents 11  environmental justice organizations around the state—says the first time the governor’s office shared draft cap-and-trade extension language with her group was in a meeting with CEJA and several other environmental groups on July 3. That language, she says, looked similar to that which appears in AB 398. CEJA told the governor’s office it “could not support” the draft.

Vanderwarker notes that the group was more frequently consulted and asked to give feedback on AB 617, a companion bill to AB 398 related to air pollution, which is more friendly to the state’s environmental justice communities.

AB 398 contains one concession to environmental justice groups: Likely in reaction to environmentalists' criticisms that out-of-state carbon offsetting projects do little to benefit Californians, the measure also includes a provision to ensure that 50 percent of those projects happen in state.

Reaction to AB 398 has exposed a divide between larger green groups and environmental justice organizations, which are generally smaller and work closely with communities being directly impacted by pollution. The Natural Resources Defense Council and the Environmental Defense Fund (EDF) came out in strong support of AB 398. Quentin Foster, who directs EDF’s work in California, wrote in a blog post that the bill “sets a national example for other states to follow.”

“The environmental community needs businesses to thrive so California’s economy remains strong,” he said. “Business needs the environmental community to hold them accountable. The Legislature needs all of us to help continue setting the standard on climate policy. We don’t get to take our ball and go home because things aren’t going our way.” The EDF could not be reached for comment on this story, and NRDC declined In These Times’ interview request.

Final details of the bill were being hashed out as Gov. Brown garnered praise from greens for announcing that California would host a Global Climate Action Summit, to be held in San Francisco in September 2018. Brown himself put the importance of the cap-and-trade extension in a global context this week. “If we don’t get it, it’d be a tragedy for California and for the world,” he said in an interview with the Sacramento Bee. “From China to the European Union, people are looking to the California cap-and-trade program.”

“Looking at the deal they’ve negotiated,” Vanderwarker tells In These Times, “it’s hard for me to reconcile California’s claims to climate leadership with what is in AB 398 because of the giveaways to industry in the bill. … Unfortunately, it’s industry that has been at the center of this negotiation for the entire time.”

The California Senate’s Environmental Quality Committee passed AB 398 on Friday, and a vote in the full legislature is expected on Monday.