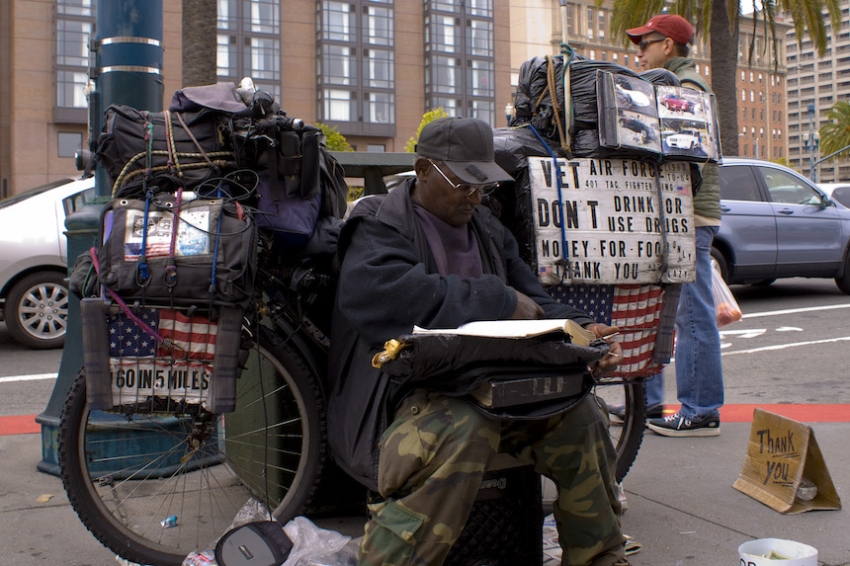 A homeless veteran sits outside the Ferry Building in San Francisco. (Vera Vu and David Li/Flickr)

The Mother Jones column is a case study in how liberals insulate themselves from the psychological and material effects of injustice.

“Empathy” isn’t really for the homeless–it’s another reflex of the “behavioral immune system,” a way of insulating liberal consciousness from the psychological and material effects of our society’s inherent injustice.

Reprinted with permission from Knock LA

This Friday afternoon, blogger Kevin Drum posted a piece for his Mother Jones “opinion blog about politics and policy (plus cats!)” entitled “Are People Disgusted BY The Homeless?” In the time-honored tradition of local TV news sensationalism, the post cherry-picks from a recent academic study to reinforce defensive attitudes about the social problem of homelessness. He then frames these attitudes in terms of “disgust.” Specifically, Drum homes in on what the researchers frame as a “strange pattern” in their report’s findings: that majorities of respondents both support aid and subsidized housing and support criminalizing sleeping in public and panhandling.

Affecting a worldly air, Drum’s Mother Jones piece asserts, “this [pattern] does not seem strange to me at all.” Congratulations, Kevin, you cracked it.

It’s obvious, without even needing to invoke the idea of “disgust,” that people are eager for solutions to the problem of homelessness but don’t care very much about homeless people. Recent Los Angeles ordinances criminalizing sleeping in cars or San Francisco laws banning tents on sidewalks may get passed under the guise of concern for “unsafe and unhealthy” conditions and on the need to encourage more “stable and successful permanent housing” but they contribute no actual funds towards increasing public housing and services. To the proponents of these measures, homelessness is a problem more like vandalism than like a humanitarian crisis.

In the face of an unprecedented surge of homelessness,  LA County has passed a pair of measures which actually begin to direct taxpayer dollars towards housing and services, but questions remain about where and how that money will actually get spent. The logic behind these criminal ordinances, ballot measures and the findings of the report cited by Drum is one and the same familiar refrain: “out of sight, out of mind.”

Of course, it’s impossible in California to keep the homeless out of sight entirely, as Drum surely knows. But the purpose of the Mother Jones article isn’t to challenge complacency and inaction on the issue of homelessness, it’s to excuse the root cause of it: an attitude which sees homelessness as a failure of personal rather than social responsibility.

By tying the feeling of “disgust” to homeless individuals rather than the system that produces and immiserates them, Drum assuages his readers’ sense of liberal guilt surrounding the homeless and the stark systemic inequality that oppresses them. To accomplish this, Drum needs to paint the homeless in the most unflattering, grotesque light possible. He writes:

“Most people don’t like being accosted by panhandlers and don’t like park benches being taken over by potentially dangerous vagrants.”

This is immediately framing the homeless as harassers and offenders. One wonders how many times Drum has written a version of this article in his mind while stopped next to a panhandler at a traffic light. Disgust, to Drum, is a “perfectly understandable reaction” to the homeless, but he doesn’t seem to understand what the study he cites actually reveals about that reaction.

For the authors of the original study, disgust is framed as a component of our “behavioral immune system”—a defense mechanism that is often “overly cautious,” causing us to “perceive others who look atypical as potential sources of disease.” The study suggests that support for criminalizing homelessness may result from our own over-sensitivity to o perceived danger. This oversensitivity isn't natural, it's thoroughly conditioned by social norms, representations and ideology.

Unfortunately, that oversensitivity isn't just baked into our personal encounters with the homeless—it fundamentally informs how missions and non-profits treat homeless individuals. The drug testing and “zero-tolerance” policies that deny aid to those who need it on the grounds of imposed moral standards are equal symptoms of this overactive immune system, testifying to a paranoid suspicion that the destitute are somehow also looking to exploit the system that has failed them. To solve the issue of homelessness, it would be necessary to understand how our overactive personal disgust mechanisms and those of the systems we construct are necessarily linked, and how they both demand to be dismantled.

Drum, however, is not seeking to interrogate our disgust, but to pacify any sense of guilt we may feel over it. “About half the homeless suffer from a mental illness and a third abuse either alcohol or drugs,” he exclaims. “You’d be crazy not to have a reflexive disgust of a population like that. Is that really so hard to get?” Yet Drum ironically appears to have missed another key finding of the survey: “coverage of homelessness can activate disgust sensitivity by referring to disease and uncleanliness.” Not only is Drum encouraging his readers to normalize their feelings of disgust, his obscenely sensational language strives to intensify that disgust before he can absolve it with a few rhetorical flourishes. In trying to make his readers feel reasonable, he’s actually stoking their irrational fears and anxieties.

Drum asserts that it would be “crazy” not to feel disgust at the homeless—that such reflexes are “innate and perfectly understandable.” This language is profoundly normative, seeking hyperbolically to maintain distinctions between sanity and mental illness which many, including myself, find deeply alienating.

Additionally, the thrust of this rhetoric, to reinforce a boundary between “sane” homed and “crazy” homeless populations, is not supported by reality. A 2014 study shows that 18.2% of the American population overall suffers from some form mental illness every year. Should we be “disgusted” by one in five people we encounter every day? A larger percentage of homeless struggle with serious untreated mental illness, but access to mental health treatment for Americans suffering mental health problems has also declined in recent years. Similarly, for many homeless coping with mental illness, there are few opportunities for medication outside drugs and alcohol, but self-medicating is hardly limited to the disenfranchised, and neither is drug abuse. These are systematic problems, not homelessness problems.

Suggesting we have more in common with the homeless than we might care to admit, however, would hamstring the central proposition of Drum’s piece: that we can overcome our reflexive feelings to become “decent human beings” by connecting with that great liberal panacea, “empathy.”  “Empathy for the homeless” doesn’t ask us for solidarity with the homeless, either because we also struggle with mental illness and substance abuse, or because we also struggle under capitalism to eke out an existence, staying one accident or depressive episode away from losing everything, while others enjoy absurd luxury. “Empathy” doesn’t ask us to think critically about the systemic failures that engender homelessness as a social phenomenon, doesn’t compel us to see how capitalism reproduces homelessness in order to maintain the engine of artificial scarcity at its core. “Empathy” isn’t really for the homeless–it’s another reflex of the “behavioral immune system,” a way of insulating liberal consciousness from the psychological and material effects of our society’s inherent injustice.

The answer isn’t to wave away our disgust the way one might wave off a panhandler. The point isn’t to overcome the feeling of disgust, to pacify it in a warm empathy bath. It’s to connect that feeling of disgust not with the individual, but with the collective social failure that each instance of homelessness represents. Until we do that, we really can’t call ourselves decent human beings at all.