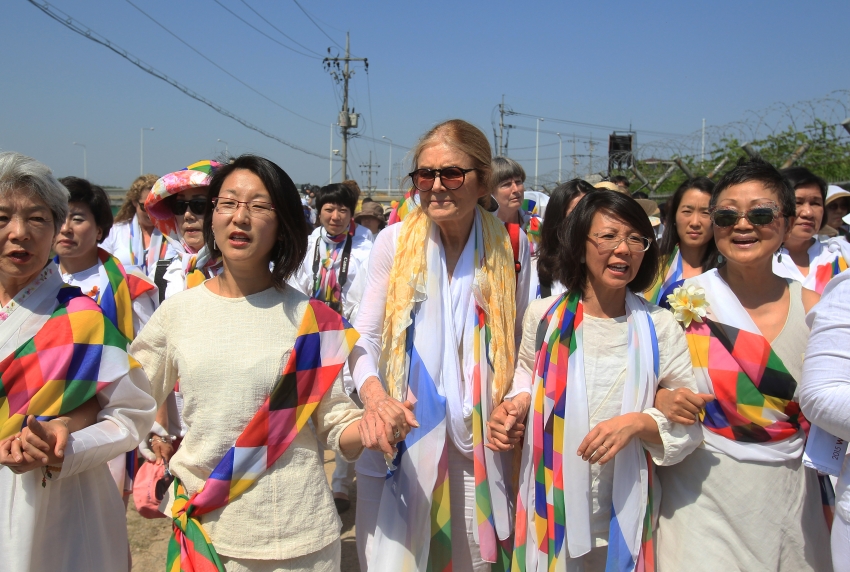 Christine Ahn, along with other activists, marches to the Imjingak Pavilion along the military wire fences near the border village of Panmunjom on May 24, 2015 in Paju, South Korea. (Photo by Chung Sung-Jun/Getty Images)

The South Korean Government Tried to Ban This Peace Activist. Here’s What She Has to Say.

Christine Ahn calls for a real end to the Korean War—and for women to lead the way to peace.

Christine Ahn is a South Korea-born, Hawaii-based peace activist. In 2015, she organized 30 women from around the world to march across the two-mile-wide, heavily militarized border zone between North and South Korea as a “symbolic act of peace.”

Ahn now finds herself in the crosshairs of flaring geopolitical tensions over the entrenched Korean War. On July 13, she learned that she was banned from South Korea after being turned away from an Asiana Airlines flight from San Francisco to China, because it would pass through the Incheon International Airport on the outskirts of Seoul.

Following media coverage of her prohibition, and outcry from her supporters, the ban was overturned, meaning that Ahn will now be allowed to enter the country of her birth after all.

As the global coordinator for “Women Cross DMZ,” this is not the first time that Ahn has faced blowback: She has repeatedly been targeted by right-wing, defamatory attacks.

Nonetheless, she says she is determined to step up her peace activism. In the coming weeks, Ahn is planning to travel to South Korea to participate in an international peace delegation, as President Donald Trump strikes a more bellicose tone towards North Korea and U.S. lawmakers move to escalate sanctions, which were already severe under President Obama.

Ahn spoke to In These Times from Nanjing, China about what it was like to find herself at the center of this geopolitical tug of war and why now is a critical time for women to lead the way to building international peace.

Sarah Lazare: Why do you think the South Korean government initially prohibited you from entering the country?

Christine Ahn: We believe the ban was put in place by former President Park Geun-hye, who is now in prison for corruption. I think they [banned me] as retribution for the 2015 women's peace walk I helped organize and lead. At that time, the Park administration’s policy towards the north was one of more isolation and sanctions, and our message as women peacemakers challenged that by calling for a peace treaty to end the Korean War and [allow for] family reunions. We wanted to draw attention to the fact that decades of isolation and militarism haven't solved the war. That went against the Park and Obama policies of strategic patience.

Frankly, I have been critical of the last two conservative [South Korean] administrations. I was willing to speak out about the expansion of militarism, including the creation of a U.S. naval base to project power against China. I challenged policies. I’ve had traction. I've contributed to a more critical perspective about the alliance between South Korea and the United States. I think they considered me a pest.

I couldn't believe that I was being punished this way. I told the Asiana Airlines supervisor that this must have been a mistake, and if it wasn't, it must have been a carryover from the Park regime. I appealed to her conscience and asked, “Really, South Korea is going to ban me because I organized this women's March across the [demilitarized zone, or DMZ] calling for peace, reuniting separated families and demanding women's inclusion in peace building?”

She walked away and said I would need to apply for a visa and purchase another ticket to get to Shanghai. I walked to the United Airlines counter, and a kind agent who was from Tonga consoled me. I showed her a pamphlet of our peace walk, including photos of our quilt stitching ceremony with North Korean women, and she encouraged me to chin up and keep moving forward, that our world needed positive actions like these.

Sarah: How did you find out the ban had been lifted?

Christine: It came out in Yonhap News and was confirmed by the reporter Boyoung Lim of Newstapa after calling the ministry of Justice. A public outcry led to several other agencies requesting that the ban be lifted.

I'm elated. The sun keeps shining with [President] Moon in power. It's an amazing testament that it is a new day on the Korean peninsula, and that the power of social movements can put enough pressure to yield positive change.

Sarah: Do you see any openings for peace in this current political moment?

The current administration has a different strategy. Moon is calling for peace and dialogue. Our plans are to support his calls for a peace treaty and to press for women's groups’ participation in the peace-building process. We now have several decades of evidence showing that when women's groups are involved, not only does it frequently lead to peace agreements, it leads to more durable and sustainable ones.

We have to get this done while Moon is in power, otherwise the Korean War will just languish on. Korea needs to get its act together, not just for millions of elders who will die not seeing their loved ones, but to avert a nuclear war that could engulf the entire region. Korea can become a neutral country and halt the regional arms race. I will do my part as an American to continue to mobilize fellow citizens to pressure our government to reach a peace deal with North Korea.

We are in a historic alignment now, especially with women being in key positions in South Korea, North Korea and China. With women in top foreign Ministry posts, and with pressure from women's peace groups, I believe women—from the highest levels of power to the grassroots—can push together for a peace agreement.

Now, the missing puzzle piece is the United States. As everyone has seen, there are only white men surrounding Trump in his cabinet meetings. But the groundwork can be laid until enough pressure is mounted in the United States.

Sarah: What can people in the United States do to support peace and de-escalation?

Christine: Americans can pressure our government to sign a peace agreement with North Korea that will normalize relations, lift sanctions and begin a path towards ending military exercises and nuclear weapons on the Korean peninsula.

We were vilified by some right-wing media for being ‘pro-north’ because we were linking the North Korean human rights issue with the continuing state of war. We've never denied that human rights abuses take place in North Korea. The unresolved war has led to a highly controlled society. Peace is not against human rights; it is part and parcel of it. Peace is a necessary condition for the full realization of human rights. Whether we like it or not, the North Korean regime will continue to use the threat of a U.S. pre-emptive strike to justify repression in the name of preserving their sovereignty.

The “winner-take-all” model that is critical of engagement and diplomacy only perpetuates the war footing, leaving no room for nuance, complexity or compromise. States of hostility and international conflict are the basis on which states have long violated the rights of their citizens. Sadly, the South Korean government, especially under Park, is guilty of the same.

The U.S.-Taliban Deal Won’t Bring Real Peace, But It Could Reduce the Bloodshed