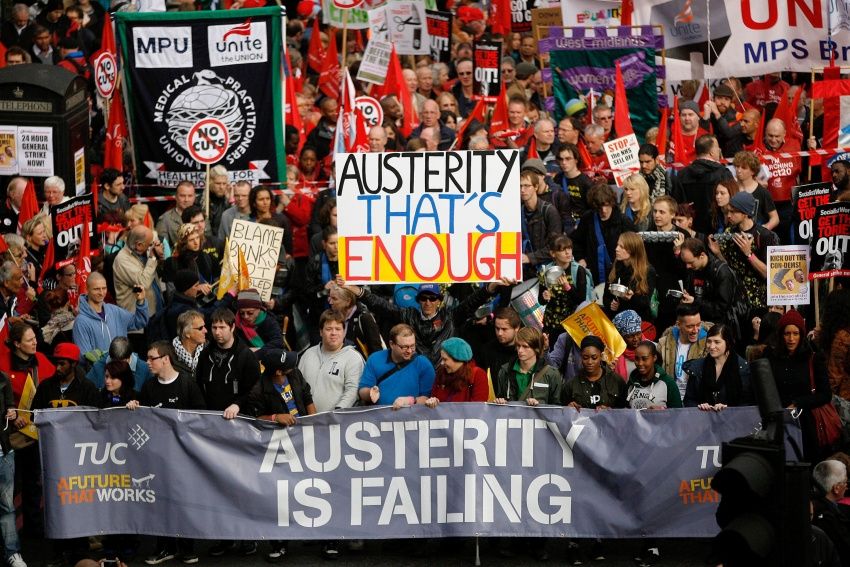 Demonstrators take part in a Trade Union Congress march in protest against the government's austerity measures on October 20, 2012 in London, England. (Photo by Warrick Page/Getty Images)

Jonathan Chait Is Wrong: Neoliberalism Is Real and Fundamentally Opposed to Left Principles

Neoliberalism stands in direct conflict with socialism. We must name it so we can overcome it.

The neoliberal center is actively supportive of market freedom, while the Left isn’t. That distinction matters.

In 2010, the National Review’s Stanley Kurtz published a book titled Radical-in-Chief: Barack Obama and the Untold Story of American Socialism, in which he argued that then-President Obama embodied a “stealthy, pragmatic and gradualist socialism.”

At the time, mainstream liberals wanted nothing to do with the politically poisonous term, and the Obama campaign’s own fact-checking website “Fight the Smears” strongly denied Kurtz’s claims that the president shared the socialist politics of the community organizers he’d worked with in Chicago.

That was seven years ago, and things have changed. Now, in the wake of Bernie Sanders’ unexpectedly historic campaign, socialism has lost some of its toxicity among mainstream liberals.

Popular websites such as Vox and The Huffington Post regularly publish stories debating socialist policies. In a post on Medium earlier this year, one self-described liberal “solutionist” even used the same phraseology as Kurtz, citing Barack Obama and Elon Musk approvingly as the kind of “pragmatic socialists”—unfairly derided as “neoliberals” by “absolute socialists”—that the world needs.

At first glance, it’s encouraging that in 2017 socialism has enough political currency that some liberals are comfortable openly acknowledging its relative merits rather than distancing themselves for fear of contamination. But, on the other hand, this formula of separating the broad Left into pragmatists and purists is patronizing—and wrong. “We want what you want,” it heckles, “only we’re smarter and more realistic.”

Such a formulation obscures the fact that socialism and neoliberalism are distinct political-economic orientations, opposed to each other on critical issues—particularly the role of the state in regulating markets and the role of private enterprise in providing essential goods and services.

On July 16, Jonathan Chait pulled a similar maneuver in an article for New York Magazine, roundly dismissing the term “neoliberal” as an empty insult devised by the purity Left to attack its steadfast allies in the Democratic Party. (The piece was artfully disassembled by both Paul Blest at The Outline and Mike Konczal at Vox, who refute Chait’s claim that the Democratic Party hasn’t moved right on economic issues since the 1970s.)

Where liberal commentators have historically been uncomfortable associating with socialists, they now demonstrate a growing tendency to elide the oppositional nature of the Left and the center to insist on shared pursuit of common goals. To hear some liberals tell it, the difference is primarily one of method, not substance. This overfamiliarity gives liberals special license to scold the Left for attacking the center, which is on its side for heaven’s sake.

In reality, it’s not simply that the center is more pro-capitalist than the Left—as though the two sides exist on a gradated spectrum, impossible to pinpoint where one ends and the other begins. The difference is actually quite clear: the neoliberal center is actively supportive of market freedom, while the Left isn’t. That distinction matters.

Neoliberalism is an economic philosophy that has its origins in Germany, France and the United Kingdom. After World War II, the doctrine migrated to the University of Chicago, where neoliberal economists, chief among them Friedrich von Hayek and Milton Friedman, established what became known as the Chicago School. This bastion of free-market fundamentalism proved massively influential in advancing neoliberal ideology around the world, most notably in Chile following the U.S.-backed overthrow of Salvador Allende’s socialist government in 1973.

Neoliberal ideology is rooted in the belief that the capitalist economy should be buttressed and protected from collapse by state assistance. But the state should otherwise allow market forces to move freely, unimpeded by government regulation.

In A Brief History of Neoliberalism, Marxist scholar David Harvey points out that the 1970s global financial crises “appeared to point towards the emergence of a socialist alternative,” and neoliberalism surged in popularity among capitalists who were unwilling to lose the “social compromise between capital and labor that had grounded capital accumulation so successfully in the post-war period.”

In the United States, neoliberalism’s raison d’être—especially as it began migrating out of academia and into political-policy-making in the 1970s and 1980s—was to dismantle trade unionism and New Deal social democratic programs, and to deregulate business at every opportunity.

Throughout history, neoliberalism has proven to be anti-socialist at its core.

The area where socialism and neoliberalism intersect is their insistence that the economy requires some degree of state intervention and planning, as opposed to classical liberalism, which puts full faith in the belief that the “invisible hand” of the market should guide and sustain capitalist economies without state assistance.

Just so we’re clear, neoliberalism means capitalism—a specific form of capitalism, where the business-friendly state encourages the commodification of sphere after sphere of both public and private life.

So, are Democrats neoliberals? Well, yes, many of them are, as is the party on the whole. Consider the government bailouts after the 2008 economic collapse. The Obama administration took a neoliberal approach by bailing out the big banks largely responsible for the crisis rather than breaking them up. In doing so they demonstrated their belief that the government has a hallowed responsibility to preserve the integrity of corporate financial institutions.

We can also look to the Trans-Pacific Partnership, the failed international trade agreement backed by Obama and many national Democrats that would have empowered corporations to challenge any nation’s economic regulations before an international tribunal. The result, Noam Chomsky noted, would have been to “maximize profit and domination, and to set the working people in the world in competition with one another so as to lower wages to increase insecurity.”

Those who object to the term “neoliberal” are appalled that, for instance, defenders of Obamacare could be lumped together with its would-be destroyers. Obamacare, remember, consists mainly of tax-funded subsidies meant to plug Americans into private health insurance networks.

Democrats and Republicans are bitterly divided over the issue, and lives literally hang in the balance. Differences in opinion on Obamacare are neither small nor unimportant. But make no mistake: Obamacare is a compromise intended to extend coverage and preserve the integrity of the private health insurance industry.

Socialists want universal social programs, funded and used by everyone, without the intrusion of profit-driven entities. They want goods and services such as healthcare, education, housing and even commodity production to be sheltered from the constant compulsion to generate profit at the expense of all else.

Neoliberals believe that society functions best when corporations are publicly furnished with what they need to survive and thrive. Socialists feel this way about the public, not corporations.

Neoliberal Democrats are not fundamentally opposed to welfare, but they differ strongly from socialists in this arena too. Where socialists tend toward universalism in program design, neoliberals like to split the baby with means-testing: the public (but non-universal) provision of a minimal social safety net, so long as it doesn’t intrude on private industry.

These Democrats prefer to assess people’s needs and divide them into two camps—those who qualify for public services and those who don’t. This form of means-testing is a neoliberal solution precisely because it doesn’t undermine the profit-seeking corporations that provide services to people above a certain income threshold, such as health insurance companies.

Socialists’ proposed healthcare solution, Medicare for All, would wipe out the private health insurance industry. This is clearly not a neoliberal proposition, as it results in less capitalism, not more. Socialists’ ideal healthcare solution, nationalized medicine, is entirely anathema to neoliberals, who only make allowances for the welfare state when it runs parallel to and supports, rather than supplants, private industry.

So no, socialists and neoliberals are not united in shared pursuit of common goals. Neoliberalism is not “pragmatic” socialism any more than a charter school is a “pragmatic” public school, or Obamacare is “pragmatic” Medicare for All. They are altogether different approaches to the provision of services and care.

Since Chait’s article was published, liberal commentators have been increasingly echoing his argument that “neoliberalism” is a meaningless term. But it’s far from meaningless. In fact, we need it as a way to distinguish between market-friendly state solutions and market-unfriendly state solutions—especially as socialism gains traction among a new generation of thinkers and activists.

“Neoliberal” is at base a neutral descriptor of the dominant strain of political-economic thinking in the moderate factions of both major political parties. When it is used as an insult, we can blame neoliberalism’s poor record of providing a decent standard of living for all people.

​Meagan Day is a freelance writer who focuses on politics, social movements, labor, law and history.