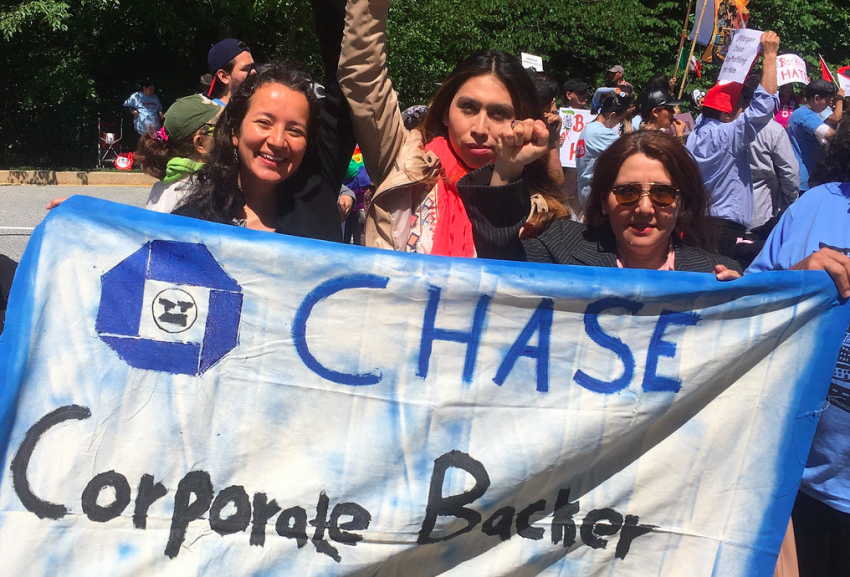 Activists are taking aim at corporations like JPMorgan Chase and Wells Fargo for their complicity in the administration’s mass deportation agenda.

The corporate partners financing this plan are just as responsible for the separation of our families.

Welcome to Interviews for Resistance. Since election night 2016, the streets of the United States have rung with resistance. People all over the country have woken up with the conviction that they must do something to fight inequality in all its forms. But many are wondering what it is they can do. In this series, we'll be talking with experienced organizers, troublemakers, and thinkers who have been doing the hard work of fighting for a long time. They'll be sharing their insights on what works, what doesn't, and what has changed, and what is still the same.

José Lopez: I am José Lopez, one of the co-organizing directors at Make the Road New York.

Sarah Jaffe: We are talking before an action that you at Make the Road are part of: a national day of action on Wednesday, August 2 around the involvement of particular big banks in the private prison and immigrant detention industry. Can you tell us a little bit about the campaign?

José: We launched a website and a campaign a couple of months ago called Corporate Backers of Hate. It is an attempt to name and shame a bunch of corporations like JPMorgan Chase and Wells Fargo for being complicit and supportive of Trump’s anti-immigrant agenda. That has taken place in a number of ways. It could come in the form of JPMorgan donating $500,000 to Trump’s inaugural committee. It could come in the form of the CEO Jamie Dimon sitting on the Trump business council. But tomorrow’s action is focused on JPMorgan Chase financing the debt of private prison and immigrant detention centers under the corporations GEO Group and CoreCivic.

Sarah: Tell us about the GEO Group and CoreCivic and JPMorgan’s connections to them.

José: Right now, a ton of the financing for the expansion of GEO Group and CoreCivic is coming from JPMorgan Chase. GEO Group and CoreCivic currently are the country’s largest private prison and immigrant detention companies. What we want to point out is that the financing is coming from JPMorgan Chase, and they are connected to the current administration in many ways.

It has everything to do with profit. We want to be sure that companies like JPMorgan Chase are not profiting off of the backs of immigrant families and are not putting profits before a moral obligation to keep families together, to keep mothers with their daughters and their sons and their husbands and their loved ones.

There has been a ton of work over the last couple of months. Some escalations and some arrests happened a couple of months ago in front of the JPMorgan headquarters. There was a shareholder meeting that took place in Delaware where hundreds of people marched on the shareholder meeting and a couple went in to confront Jamie Dimon. We just want to continue the drumbeat of going after corporations like JPMorgan Chase that stand to profit off of the misery and suffering of our communities.

Sarah: Tell us a little bit about the research that you have been doing around immigrant detention and private prisons and their connections to the Trump administration.

Daniel: Make the Road and the Center for Popular Democracy, with our partners, embarked on this project to look into the companies that were most complicit. There is a long body of research, and there have been organizations around the country that have been looking into this for some time. With companies like JPMorgan Chase, one of the things we found was that this was one of the companies that is financing the largest private prison and immigrant detention companies like the GEO Group and CoreCivic, formerly the Correction Corporation of America. The way that that happens is that JPMorgan finances the debt of these companies, so it enables these companies to sustain their operations and to expand.

Sarah: Private prisons are a relatively small portion of the overall prison system, but they play a really big role in immigrant detention. I wonder if you could talk a little bit more about the way that these companies profit off of an increased deportation regime like Trump’s.

Companies are making money in different ways. First of all, they are getting contracts to run facilities. One of the things that happens congressionally is there is something called a “bed mandate.” Congress has passed a law so that there need to be 34,000 people filling beds in immigrant detention facilities. We know that the Trump administration wants to ramp that up considerably. These companies are getting contracts to help them achieve that goal and then make more money and help them meet their bottom line. What we are saying to JPMorgan Chase and Wells Fargo is, “You cannot be in the business of financing, or being in any way financially entangled, with these morally odious companies.”

Sarah: Is the Trump administration ramping up the amount of time people are staying in detention? Are they trying to deport people faster? Is that changing at all under this administration?

Sarah: Talk a little bit about how Trump’s agenda has been affecting the communities that Make the Road organizes in. Tell us about what this is doing and how people are resolved to fight back.

José: There has been a heightened fear in our communities and increased concern that the rhetoric is actually coming to fruition. Already under Trump, more than 21,000 immigrants have been detained and potentially separated from their families.

A lot of what we have been doing is trying to play defense when it comes to the national landscape and making sure that we are working to support our communities through policy and through advocacy. But also, we are creating defense committees. One of the big things that we have been doing organizationally is making sure that community members are equipped to build safety networks on their local blocks and in their local communities to have immediate forms of communication if it is perceived that ICE is in the area attempting to conduct a raid.

While there has been this heightened sense of fear, immigrant communities at Make the Road and other organizations are doing a ton of work to really build communities, create these defense committees and come out and share their stories. Coming out of the shadows and then launching bold campaigns, like this Backers of Hate campaign, where they are making connections to corporate partners and saying, “No.” Again, this administration cannot do it alone. The corporate partners financing this plan are just as responsible for the separation of our families. We can no longer let them slide under the radar. There is a lot of work being done, but there is still a lot more to be done.

Sarah: How can people get involved in this campaign, in the defense committees, in work to defend immigrant communities wherever they are?

There are other things you can do if you can’t get involved with an organization, don’t have the time or are not in close proximity to a group. Folks can visit the Backers of Hate website. On the website, we profile a number of corporations, not just JPMorgan Chase, and their connections to this administration and trying to advance an anti-immigrant agenda.

When you visit the website, you can click on the link that says, “Give them hell,” and it will ask you for some basic information like your name. Then it will allow you to write a letter that will allow you to reach the top executive at each of the corporations. You can write as little or as much as you would like about your support for the immigrant community. Then, once you click “send” on that letter, the letter will automatically be sent to some of the top executives for each of those corporations.