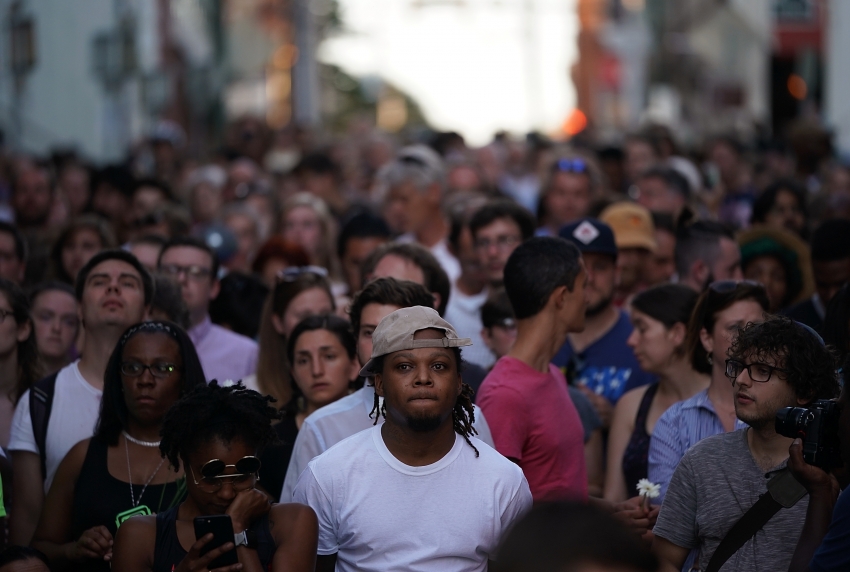 Hundreds of people gather at an informal memorial on the spot where 32-year-old Heather Heyer was killed when a car plowed into a crowd of people protesting against the white supremacist Unite the Right rally August 13, 2017 in Charlottesville, Virginia. (Photo by Win McNamee/Getty Images)

“Not Here, Not in My Town”: Charlottesville Black Lives Matter on Why We Must All Resist Fascism

A member of Black Lives Matter argues we must not ignore white supremacy: We must actively oppose it.

I am of the belief that everyone out there in the spirit of community defense was acting in robust and muscular love.

Communities in Charlottesville, Va., are reeling from a murderous Nazi and white supremacist march on their town—one that stole the life of anti-Nazi protester Heather Heyer and wounded many more. I spoke with Lisa Woolfork, a member of Charlottesville’s Black Lives Matter chapter, about what solidarity and anti-racist organizing looks like in this moment.

She explained that Charlottesville's Black Lives Matter chapter formed in June as “committed Black folks coming together from a variety of walks of lives, to stand up for preservation of Black lives, to stand up and make sure Black issues are not forgotten.” Woolfork, who is an associate professor at the University of Virginia (UVA), underscored that she is proud of everyone in her community who rallied together to resist organized white supremacists. “This is what community defense looks like,” she said. “You say, ‘Not here, not in my town.’”

Sarah Lazare: How are you, your community and Black Lives Matter holding up after a harrowing few days?

Lisa Woolfork: I believe we are resilient. The reason we came out in the first place was for community defense. All the actions that took place that day were about defending Charlottesville as a community, standing up for our city, and saying no to the racists who wanted to invade and take over. I feel we did that very successfully. It was wonderful to stand shoulder to shoulder in solidarity with a variety of people. It was Black folks joining in with folks from many different walks of life. I was moved by that.

At the vigil last night for Heather Heyer, the woman who was murdered, I saw it again. The same resolve for Black self-determination. For what Black Lives Matter stands for. To stand up and to say, “You might come armed—our community is willing to stand up against that.” The alt-right comes armed with assault weapons. They came to do damage. This was about the liberation of Black lives as well as criticizing white supremacy.

White supremacists are not just marching in the street, but they seem to be endorsed at the highest levels. The White House now has Stephen Bannon as a special adviser to the president. In some ways, he is the godfather of the alt-right.

What Charlottesville let the world see is that there is a connection between racist ideas and racist action. The reason the alt-right came to Charlottesville is that they were terrified to lose their Civil War participation trophy, their confederate monument to Robert E. Lee—who fought to maintain a white-supremacist republic. That’s why the alt-right was here. Principles of white supremacy and Black subjection still appeal to them.

Sarah: How can people across the country and the world show solidarity right now?

Lisa: There are a variety of ways people can stand up. Support Black Lives Matter—not just in Charlottesville, but all around the country. Get tapped into local organizations. Have uncomfortable and difficult conversations that can open the door to greater understanding. Be willing to be uncomfortable. Don’t just go along with racism and casual white supremacy. That just normalizes white supremacy.

There is a reason white supremacy is the air we breathe in this country. White supremacy is not just the Nazis and alt-right. It’s also very casual and subtle. It’s saying things like, “You’re pretty for a Black girl.”

Trump cannot reprimand that alt-right, because they are his base. There were a lot of people out there with “Make America Great Again” hats. The rise of Trump has coincided with a spike in hate crimes during the first months of his presidency. After he was confirmed by electoral college, there were tons of acts and incidents that very day. This is something we might want to think about.

I’ve never heard of a sore winner. They won [the election], and they are acting as if they lost. They are beating people in the streets. If you won, why are you beating up Muslims and immigrants? They are the party of the aggrieved white people, and we saw them marching through our streets and our city, throwing up Nazi gang signs. They were right near the library where I take my kids, right across the street where my son gets his hair cut.

Sarah: What do you want people to know about what happened in Charlottesville over the weekend?

Lisa: This is what community defense looks like. You say, “Not here, not in my town.” You come out, speak out. That’s what Charlottesville Black Lives Matter came out to do. We are pleased we were able to do that and fortify our community, fortify ourselves, stand up against this violent tide of white hatred that should not be allowed to go unchecked.

I believe that can happen in overt and covert ways. All across the country, there were solidarity rallies: in New York, Atlanta. People all over the country stood in solidarity with Charlottesville. This is the opportunity and this is the time. If not now, when?

Sarah: What is your response to people who say we should just ignore fascists?

Lisa: I believe that the claim that we should just ignore them is problematic. The alt-right is not out there because they want attention; they are out there because they want to promote white supremacy. They have tons of followers on Instagram, Facebook, Reddit. They have a strong social media presence. They have a global following. They are everywhere. They are trying to maintain white supremacy. That’s what they’re fighting for. To say they are out there for attention is to treat them like they’re naughty toddlers, not dangerous terrorists.

It’s a tacit and silent endorsement of white supremacy to say it can be tolerated or that everyone has a right to their opinions. It belies the fact that racist thought and racist action are connected. The symbol of Lee is a magnet for racists and white supremacists. We are inviting them by maintaining that negative hatred at the center of our city. We create hospitable conditions for them.

Sarah: Is there anything you want our readers to know about what local organizing looks like from here?

Lisa: As we move forward, we have a lot of issues we are working to promote. We want awareness of some of the inequities and issues of injustice in our city. Nearly 80 percent of stop-and-frisks in Charlottesville are of African Americans, even though we only comprise 19 percent of the population. We want people to pay attention to the court case about the Confederate monument. We call on Charlottesville city council to fight to remove confederate monuments from public spaces, so we’re a less hospitable place for Nazis, white supremacists and racists. There is the case of a missing transgender women, whose disappearances are overlooked nationally.

I would advise people to look forward, look within, and look locally. What can you do to challenge white supremacy in your daily life? We have to stop believing white supremacy is someone else’s problem. Because we live in America, which has white supremacy at its base, it lurks in all of us. Challenge things, ask questions, intervene if you see someone harmed.

Look locally. See what’s happening right in your town where you can help. What is the poverty rate in your city? How is public education? Do you have a public education system that fails Black and Brown students? What kind of steps can you take to remedy that? What about hunger? How does that work in your town? The problems with Charlottesville are problems with every city in America.

Sarah: What is your response to politicians and pundits who are demonizing people who are resisting fascism?

Lisa: I believe there should be a diversity of tactics in order to fight white supremacy. I believe that these fascists came to invade our town and to terrorize. They came with weapons, with bats. They create a false equivalency when they say Nazis are equal to anti-racist activists. That is an unbalanced equation. By demonizing the anti-fascists, it makes fascism look as if it’s a viable social position. There were people out there Saturday in khaki pants and white polo shirts who marched to where I teach at UVA and shouted, “Death to the Jews, we will not be replaced.”

I recognize that there is a diversity of tactics, and I am of the belief that everyone out there in the spirit of community defense was acting in robust and muscular love. Love for humanity and justice, against the tide of white supremacy and all sorts of things being normalized.