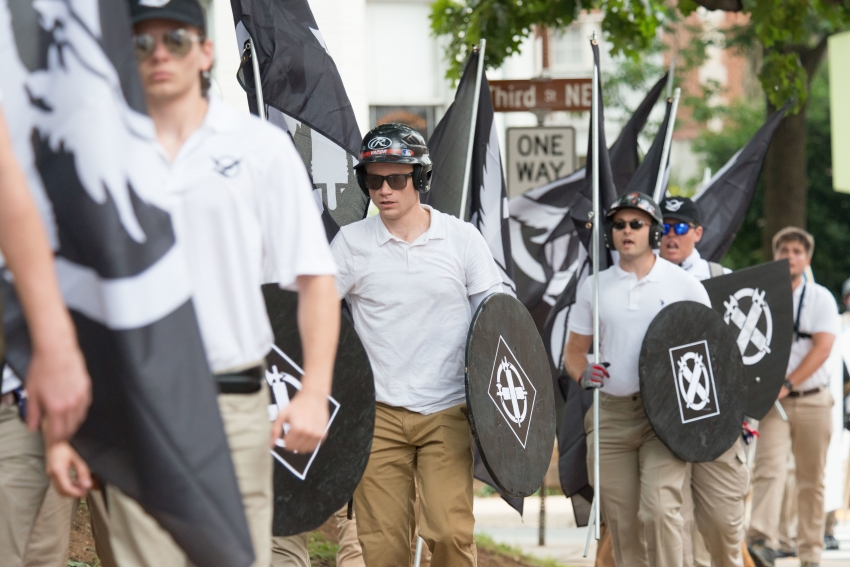 We must be very wary of any attempts to excuse or normalize white supremacy.

After a fascist march in Charlottesville, Va. left one anti-Nazi protester dead and 19 others wounded, there has been widespread criticism of President Donald Trump’s failure to forcefully denounce white supremacists. However, this condemnation has rarely included a genuine understanding of the actions of antifascist protesters in Charlottesville and elsewhere, creating a continued justification for the “both sides” argument that paints antifascists, or antifa, as equivalent to the white supremacists they oppose.

As a researcher who has attended numerous political and social events with antifascist involvement, and interviewed many antifascists, it is clear to me that politicians and pundits are drawing a false equivalence between white supremacist and antifa actions—and ignoring the direct threat posed by supremacists that motivates antifascist responses. Antifascists often serve as the first line of defense when police and civil society fail to protect marginalized groups from fascist threat. Their actions must be understood in that context.

The flaw in the “both sides” position is that the violent protest actions of antifa are equivalent to the violent actions of white supremacists. A brief examination of the two movements’ approaches to violence points to the fallacy of comparing the two.

For white nationalists, neo-Nazis, the “alt-right” and others in that camp, violence is an end in itself. The ideology that they adhere to not only calls for the violent elimination of any group that falls outside of their narrow conception of normalcy, but also sees violence as the ultimate goal. From classical fascism to self-styled white nationalist social clubs like the Proud Boys, the use of violence is understood to be the means by which one’s goals are achieved. When even the most moderate position the alt-right or fascist movement can take is racial separation or nationalism through forcible repatriation and strict border control, including forced deportations and racialized exclusions, that movement is inherently violent.

But it doesn’t stop there. The “alt-right” is marked by its strategic deployment of symbols and Internet meme culture toward its political agenda. This culture is defined by its violent symbolism, from venerating individuals fighting antifa such as Kyle “Based Stickman” Chapman to the use of “helicopter ride” memes, referential to the murderous Pinochet regime to threatening leftists and antifascists to celebrating the death of Heather Heyer. This is a movement that laughs at the use of violence and encourages its participants to engage in violence as a self-righteous indulgence and source of gratification.

We can juxtapose antifa’s use of violent tactics with the way in which the far-right understands violence.  Antifascists are focused on a singular goal as described by their movement name: opposing fascism. The antifascist strategy relies on a variety of tactics. As Spencer Sunshine points out in his history and profile of antifa groups, “antifascists have greatly increased their work on intelligence gathering, doxing and pressure tactics.”

Street confrontations are only a small part of the activity engaged in by antifascists. Antifa more often relies on gathering information about white supremacists and bigots, then confronts them through public shaming. Antifascists who were interviewed and responded to surveys as part of my dissertation research conducted in 2007 and 2008 consistently expressed support for nonviolent tactics, in addition to an escalation of tactics as necessary to stop supremacist events, organizing, and recruitment efforts. It would be a mischaracterization to claim that antifa oppose nonviolence. Instead, it is more accurate to say that antifa often justifiably view nonviolence as ineffective against a movement that is violent at its core, and participants who seem to lack any semblance of a conscience. This is the essence of antifascist use of violence.

Unlike the various supremacist movements that treat violence as valid political expression, antifa treat violence as a defensive tactic against an opposing movement that leverages violence. For antifascists, violence is self-defense, because the far-right movements constitute direct threats to their existence and safety, as well as the existence and safety of their communities.

My research found that antifascists who were willing to engage in violent action were also more likely to face direct or indirect threats from white supremacists as a result of personal identity, political ideology, or spatial proximity. Antifa are often much more diverse than the black-clad, young, presumably white male so often assumed by their representations. The antifa who I interviewed often felt a personal threat from the ideology of white supremacist groups because their sexual orientation, gender identity, race, or religion was a target of supremacist violence.  These individuals saw their antifascism as a means of personal self-defense against a group that was targeting them for everyday violence and ultimately violent elimination. Even the white, heterosexual, cisgender men observed a certain amount of personal threat because they are viewed as “race traitors” or “cucks” as a result of their antifascist activism.

The hyper-awareness of such targeting is partially a result of political activism on the part of these individuals that is distinct from their antifascist work. Antifa activists aren’t solely concerned with opposing and stopping far-right movements: They are often involved in movements for racial justice, LGBTQ rights and leftist ideological campaigns for racial and economic justice through radical transformation of society inspired by communism or anarchism. These positions are identified by the far-right as political opponents who are to be eliminated by acts of extreme violence. Antifascism becomes not only a form of personal defense, but also a defense of the political activity that one is involved in. White supremacists and other far-right activists threaten progressive bookstores, organizing and social spaces, LGBTQ events and spaces, as well as places of worship that have included African-American churches, synagogues, mosques and Sikh temples.

Finally, many people choose antifa’s militant tactics because they find themselves much more likely to have some form of contact with white supremacists. Many of the antifascists in my research came to this form of activism because they were involved in punk and other underground music subcultures that were viewed as recruiting grounds by white supremacists. Their activism developed out of the threat of violence that racists brought into those subcultures. Subcultural antifascists come to embrace violent tactics because white supremacists do not leave subcultural spaces when asked nicely or confronted nonviolently. The same holds true when white supremacists threaten political, social and cultural spaces. Their purpose is to intimidate, and violent confrontation by antifa is often the only means of reducing or ending that threat.

The position that antifascist use of violent confrontational tactics is equivalent to the violence of the far-right reflects a lack of understanding of both fascist violence and the threat faced by antifa, and by diverse communities in general. Whereas supremacist movements treat violence as their ultimate goal, antifa approach it as a necessary tactic in self-defense. This position of self-defense is the product of the very real threat the white supremacists pose to antifascists and numerous other groups. Antifa come to understand that threat because their personal identities, as well as their political activism, are targeted by fascist violence. And they are more likely to actually face that violence than the average individual. By understanding the sense of threat observed by antifa, we can gain a greater context for their actions.

Stanislav Vysotsky is an Assistant Professor of Sociology and Criminology at the University of Wisconsin-Whitewater. Dr. Vysotsky’s research focuses on the conflict between supremacist groups in contemporary American society and their militant antifascist opposition through ethnographic and interview research with antifascist activists, in order to understand the relationship between threat, space, subculture, and social movement activism.