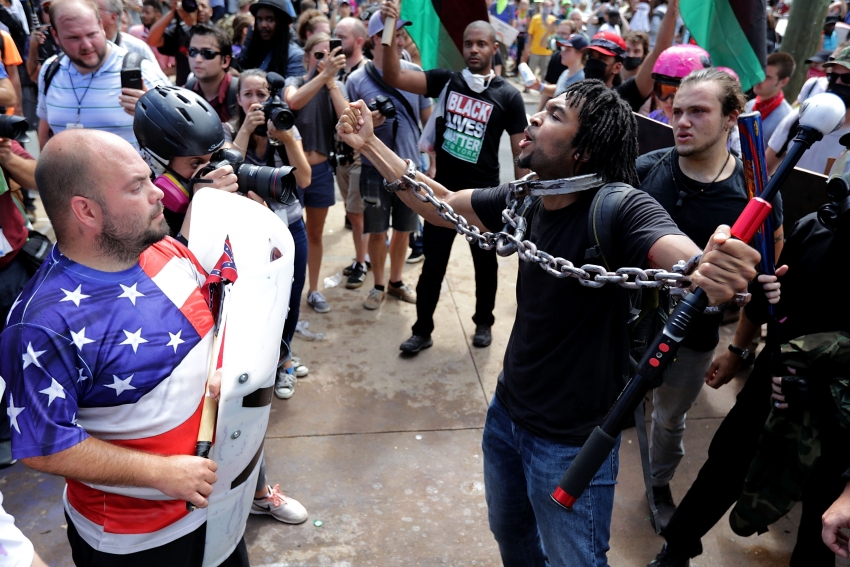 While the media focused closely on the spectacle of white polos and khaki pants worn by the killer, most sources missed a long backstory of far-right political violence.

White supremacists’ coup on the culture may have hit its zenith with the August 12 “Unite the Right” rally—a convergence of far-right groups that ended with racist attacks, dozens of injuries and three dead. In the firestorm of controversy that followed the fascist onslaught in Charlottesville and Trump’s open support for keeping the Confederate monuments in place, a number of important issues have gone under-reported across mainstream news outlets.

While attention has been given to differences of opinion on strategies and tactics, less reporting has given credence to the solidarity that existed. The massive wave that confronted the Unite the Right configuration was the result of the hard work of organizers in left movements that built on their existing projects and networks to create a plan. Solidarity C’Ville functioned as the local coalition, drawing together anti-racist organizers with community groups and faith organizations—and helping to bring in speakers, including hundreds of clergy and faith leaders.

Charlottesville Black Lives Matter used a strategy of community defense, underscoring that police assaults on black people are waged alongside violence inflicted by armed insurrectionary white nationalists. “We are not all going to agree on the best way to free one’s city from an influx, an incursion, of racial hatred,” Black Lives Matter organizer Lisa Woolfork told In These Times. “But I believe that all of us are motivated by a strong feeling of love and fellowship.”

Mass mobilizations like this are necessary to stop fascist events, and can only happen with the conscious coordination of huge numbers of participants through collaborative networks. As Cornel West pointed out in later interviews, anti-racist radicals saved lives on August 12. Those life-saving actions were the result of a huge upsurge in responsive organizing around the country.

Trump’s ongoing blunder of a response has become a meme, but the words he chose have not been scrutinized closely enough. In his second statement, he went after low-hanging fruit: the KKK and neo-Nazis—organizations that rightfully inspire fear and hatred. He refused to name the alt-right. When Trump later berated the “fake news,” he demanded a reporter define the alt-right before outrageously placing blame on the “alt-left.”

Trump’s unwillingness to include the alt-right in the open white supremacist camp, even though that label is empirically precise, shows his clear understanding of the role they played in his election and his dependence on figures like Chief Strategist Steve Bannon. All of this adds an air of confusion with Bannon’s final removal from the White House, indicating conflicting influences and the possibility of a GOP attack on Trump’s populist cadre. White nationalist leaders like David Duke and The Daily Stormer’s Andrew Anglin praised much of Trump’s response while politicians and pundits roundly decried him, all while he doubled down in defense of the white nationalist corner of his base.

3. This is what white supremacists do.

While the media focused closely on the spectacle of white polos and khaki pants worn by the killer, most sources missed a long backstory of far-right political violence. Not only did a Three Percenter who admires Timothy McVeigh attempt to explode a truck bomb in Oklahoma City on the day of the Charlottesville violence, but Tucker Carlson’s Daily Caller website released a video in January featuring 90 seconds glorifying a dozen different incidents of cars running over protesters in Minneapolis, Baltimore and other cities. Memes about running over protesters have been popular among right-wing groups for over a year, and have been shared by such public figures as a New Mexico police union chief and Instapundit blogger Glenn Reynolds. Earlier this year in Indiana, GOP lawmakers attempted to legalize running over protesters.

Aside from the general erosion of civility toward protesters—particularly Black Lives Matter demonstrators—the alt-right has been responsible for random machete attacks, murders, the alleged attempted manufacture of a dirty bomb and open attacks on leftist groups and rallies. Such apparently “random” violence is deeply rooted in the alt-right’s online celebration of lone wolf attacks, as well as the culture of unaccountability surrounding the White House.

4. This was their break with conservatism.

“The alt-right means white nationalism, or it means nothing,” said alt-right commentator Greg Johnson of Counter-Currents Publishing—and he was right. While the term has been bandied about to describe iconoclastic right-wingers—Trumpists in the anti-political correctness order—it is actually a movement that takes its cues from European white nationalism. The sphere around them, including people like Lauren Southern, Milo Yiannopoulos and Mike Cernovich, has been labeled the “alt-light,” a reference to supposedly more moderate counterparts who refuse to take on the more explicitly fascist ideas.

After recent feuds during contentious “free speech” rallies, Unite the Right was a chance to unite all areas to the right of conservatism. This was a white nationalist break from its more mainstream partners, a chance for them to try and stand on their own and take ownership over an autonomous, populist movement. As alt-light groups supposedly disavowed the mobilization, the alt-right exposed their willingness to further marginalize themselves and stand instead with the more violent actors inside their ideology.

5. Morality is not victory.

Much of the press has struck a tone of moral victory, as public opinion turns against the white nationalists revealed as murderers. Similarly, the early-1990s growth of the controversial Patriot militia movement connected to neo-Nazi Christian Identity churches fell apart after Timothy McVeigh set off the bomb in the Oklahoma City Alfred P. Murrah Federal Building, killing 168 people, including a number of children. This cultural shift is fleeting, however, without a conscious organizing that follows it. Organizations like the Montana Human Rights Network worked tirelessly to confront the militias in the wake of the Oklahoma City tragedy, joining with newly politicized communities. Without organizations continuing this work and transferring the shift in public perception into public action, moral victory will turn into moral failure.

In the days that followed, major alt-right institutions have been shut down, from web hosting to funding services to email providers to social media. Participants in the rally have been fired from their jobs, disowned by their families and have returned home to outraged communities. This does not bode well for a movement dependent on a media echo chamber and Web 2.0 speech platforms. While alt-right celebrities like Andrew Anglin and Christopher Cantwell doubled down on their violent rhetoric, others are attempting to distance themselves. This signals further splits in the alt-right movement. The growing anti-fascist movement can widen the gap and build a base in the communities the right wants to recruit.

Shane Burley is a writer and filmmaker based in Portland, Oregon. His work as appeared in places such as In These Times, Truth-Out, Labor Notes, ThinkProgress, Roar Mag, and Upping the Anti. He is the author of forthcoming book Fascism Today: What It Is and How We End It (AK Press, 2017). His most recent documentary "Expect Resistance" chronicles the intersection of the housing justice and Occupy Wallstreet movement. His work can be found at ShaneBurley.net, or reach him on Twitter at @shane_burley1.

Alexander Reid Ross is a lecturer in geography at Portland State University and the author of Against the Fascist Creep (AK Press, 2017). His articles have been published in ROAR Magazine, Waging Nonviolence, Think Progress, and Truthout.