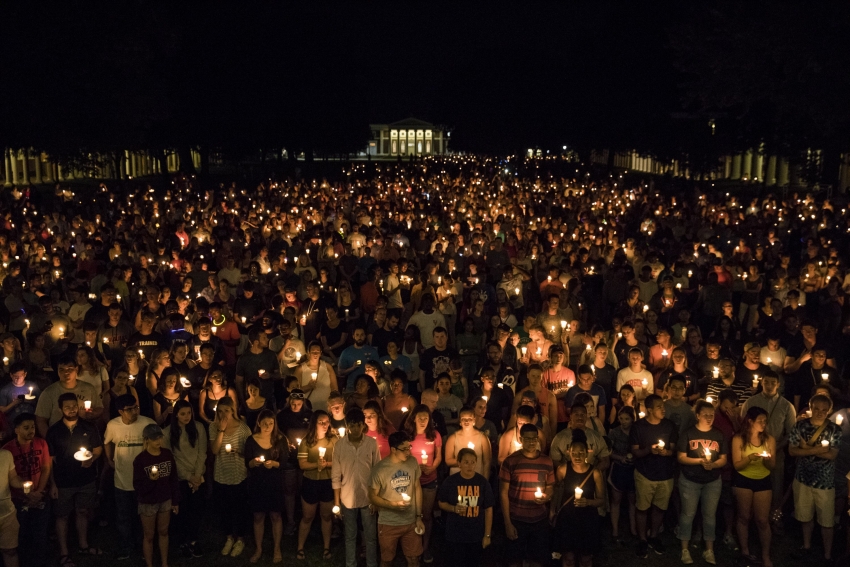 Thousands gather with candles to march along the path that White Supremacists took the prior Friday with torches on the University of Virginia Campus in Charlottesville, United States on August 16, 2017. (Photo by Samuel Corum/Anadolu Agency/Getty Images)

Nausea After Charlottesville: A Reflection on Anti-Semitism

An incident in 1967 in a small town in New Jersey shows how difficult it is to heal the deep wounds of hatred.

In the back of my mind, I suppose I want to believe we still have a chance to do better as a nation than Wayne did as a small community, even horribly burdened as we are with Trump.

I’m having a déjà vu all over again. Fifty years ago, the town I grew up in—Wayne, New Jersey—went through a searing episode in which a brash and blunt public figure used anti-Semitic comments as a dog-whistle in a local election. The episode, briefly national news, presented the town with a perfect opportunity to own and purge the ugliness in its midst. Instead it decided to do the opposite.

I was in second grade then, oblivious to everything but the emotions of the moment. But my mother, Saundra Segan (Kalb), was a beautiful, idealistic, young English teacher in Wayne ready to turn the world on its head with literature. She knew all the key players and ended up resigning in protest over the affair—a costly decision that had major ramifications for my family.

This incident could have been a mere scratch. Instead it swelled into a festering social wound and enduring stain. In the wake of Charlottesville and the nausea everyone I know feels about it, I’m moved to tell this story now in the spirit of “the road not taken.” In the back of my mind, I suppose I want to believe we still have a chance to do better as a nation than Wayne did as a small community, even horribly burdened as we are with Trump.

Like many suburban towns in 1967, Wayne was facing ballooning public school costs due to a mushrooming population. Its school budget had become a driver of annual discord because of stiff resistance to tax hikes.

In this atmosphere, the vice president of the Board of Education—a cocky, flamboyant, Trumpish egomaniac named Newton Miller, prone to reckless, offensive remarks—delivered a statement to the local newspaper declaring that two candidates for the Board were too liberal because they were Jews. If Jews won a Board majority, he wrote, “Wayne could be in real financial trouble.” He added for good measure: “Two more votes and we lose what is left of Christ in our Christmas celebrations in our schools. Think about it.”

These remarks are mild by the standards of Charlottesville, but they were painful and shocking at the time. The deliberate use of bigotry in election appeals had then become taboo, at least in the Northeast, and lots of people were proud of that.

Miller was widely condemned by the powers that were, including New Jersey’s governor and Senators and the editorial page of the New York Times. He was censured and asked to resign at a nationally televised school board meeting. The smart money saw him as a political suicide and assumed that the town would duly elect the highly qualified Jewish candidates it had seemed poised to elect.

Instead, those candidates were defeated in a landslide in favor of less qualified gentiles, one of whom hadn’t bothered to campaign. The shaming national publicity had backfired as the townspeople used their votes to prove they couldn’t be bullied by elites.

It was an extraordinarily ugly moment that divided the town for decades. The area around Wayne did have a bigoted past: KKK and German-American Bund activity before WW II, restrictive housing covenants that excluded anyone not northern-European white from two desirable lake neighborhoods. But things had been harmonious for decades, even as the town grew by a factor of three and attracted about 2,000 Jews.

People were courteous, neighborly. There was no open intolerance. I don’t remember a single incident of “dirty Jew” bullying on the street like those Nathan Englander painfully describes on Long Island in the same period.

Then came the Miller incident and, as my parents tell it, everything changed. Neighbor mistrusted neighbor. Stony silences prevailed in encounters in supermarket aisles. People no longer discussed local issues with one another at barbecues or PTA meetings—not, that is, without foreknowledge of which “side” the other person was on. You were either for Miller or against him, and the majority was evidently for him because he went on to be elected Mayor of Wayne three times.

My mother said the anti-Semitism of that moment was never the main point. It had been a deflection, a cynical hail-Mary pass by a mild bigot bent on keeping the school budget and taxes low. The social wound festered, because so many people were ready to wink the cynicism away as an innocuous gaffe while their neighbors were deeply offended. For them, the move had crossed a bright-red line of decency.

The incident transformed Wayne. In my mother’s eyes, it changed the place from an entity that could fairly be called a community into a soulless, atomized patchwork of single-family houses. When we moved there from New York City in 1963, she felt it had a nascent but manifest social and ethical center, an unmistakable soul. After this it became permanently the quintessential, deserted-sidewalk social wasteland. No one mingled anymore. They kept to themselves, mixing only with those who they knew shared their assumptions.

And this is the grievous social damage inflicted by politicians like Miller and Trump—the breakdown of trust and faith in a communal ground they leave in their wake. For the sake of their selfish, short-term goals, they are prepared to destroy the painstakingly woven human fabric of whole towns, cities and now the nation.

My parents stuck it out in Wayne for another eight years, occasionally doing subversive things like taking strolls down the block and striking up conversations about Nixon in people’s driveways, circulating a neighborhood petition against fences other than for swimming pools and reaching out socially to one of the town’s only black families.

None of it took root. They felt unappreciated and more and more alien. Money grew short. My parents’ marriage crumbled. I’ll refrain from blaming all of that on Newton Miller. As the horrifying images from Charlottesville flash on the screen, though, I find myself cursing his memory while honoring my mother’s, and hoping that some rare, brave people arise in all towns like Wayne to knock on their neighbor’s doors and put their heads together about what the hell to do now.

Jonathan Kalb is a Professor of Theater at Hunter College, CUNY. He is the author of five books on theater and has recently been writing personal essays. His writing has appeared in The New Yorker, The New York Times, The Nation and many other publications. His blog, "Something the Dust Said," can be found at www.jonathankalb.com.